Cardston, Alberta--(September 17, 2018) - American Creek Resources Ltd. (TSXV: AMK) ("the Corporation") is pleased to report final assays from high-grade gold samples that have now been received from the late fall of 2017 sampling program that was conducted at the company's 100% owned Dunwell Mine project located in the Golden Triangle of British Columbia.

A total of 30 rock samples were collected from multiple locations on the property, both on surface and underground. Sampling targeted mineralized veins that were encountered while exploring the property and determining the location of past diamond drill holes from drilling conducted in 2010 by the previous owners. The majority of the samples contained high-grade gold including high-grade silver, zinc, and lead with some copper. All results are reported in the table below: 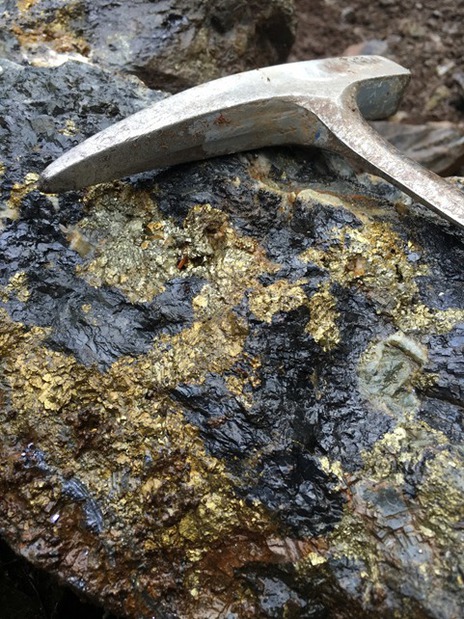 CEO and President, Darren Blaney stated: "We are very pleased to see numbers like this in our initial sampling as it confirms our belief in the potential of this project. The Dunwell is an incredibly prospective property located in the heart of the Golden Triangle. It has everything going for it from amazing logistics to past high-grade production, with all indications being that there is substantive additional ore yet to be mined. A drill program to confirm and delineate the ore zone under the old workings is now being prepared."

Through a series of strategic acquisitions American Creek was able to purchase the past-producing Dunwell Mine as well as several adjoining very prospective properties, combining them into one large land package that encompasses the best gold and silver mineral occurrences and historic workings in the Bear River valley. The amalgamated property spans 1,665 hectares covering the northern portion of the Portland Canal Fissure Zone, an area first prospected in the late 1800's and hosting some of the earliest producing gold and silver mines in the Stewart area.

The Dunwell project is located 8 km northeast of Stewart and is road accessible with the Dunwell Mine adit itself located only 2 km from Highway 37A and a major power line. Stewart hosts a deep sea port including ore loading and shipping facilities. Unlike the majority of mineral properties located near Stewart, the Dunwell is located in low mountainous terrain (700 m and lower elevation) with moderate relief. These features allow for year-round work which typically isn't the case for exploration programs conducted in the Stewart region where projects are typically at higher altitude, are accessible only by helicopter, and lack critical infrastructure such as roads and power. The Dunwell project may just have the best logistics of any project in the Golden Triangle.

Although there has been an extensive amount of small-scale historic work (pre-1940) in this area given its close proximity to Stewart, very little modern exploration has been conducted on the property.

Strong potential exists to delineate additional ore zones along strike with the present workings and at depth below the No. 4 level. A small drill program conducted by the previous owners in 2010 revealed a zone at least 300 metres long and 200 metres down dip with a true thickness of 4-7 metres, suggesting an extension of the mineralization discovered in 1979. Eight holes were drilled for 150 metres below and to the north of the old underground workings resulting in the discovery of a wide quartz breccia zone with strong sphalerite, galena, pyrite and chalcopyrite. Due to unfavorable market conditions, the work was never followed up. Significant results from the 2010 drilling are displayed in the table below:

In addition to the Dunwell mine itself, the property package also contains numerous other high-grade gold and silver occurrences and small-scale gold/silver high-grading operations along a north/south trend that correlates to the fissure zone and major faulting. These include the Sunbeam, George E., Little Wonder, Ben Ali, Lakeview, Victoria (Main Reef), Mayflower, Goldie, Mimico and Tyee.

The Qualified Person for the Dunwell results in this new release is James A. McCrea, P. Geo., for the purposes of National Instrument 43-101. He has read and approved the scientific and technical information that forms the basis for the disclosure contained in this news release.

American Creek holds a strong portfolio of gold and silver properties in British Columbia. The portfolio includes three Golden Triangle gold/silver properties; the Treaty Creek and Electrum joint ventures with Walter Storm/Tudor as well as the 100% owned past-producing Dunwell Mine. Other properties held throughout BC include the Gold Hill, Austruck-Bonanza, Ample Goldmax, Silver Side, and Glitter King.

Certain statements contained in this press release constitute forward-looking information. These statements relate to future events or future performance. The use of any of the words "could", "intend", "expect", "believe", "will", "projected", "estimated" and similar expressions and statements relating to matters that are not historical facts are intended to identify forward-looking information and are based on the Corporation's current belief or assumptions as to the outcome and timing of such future events. Actual future results may differ materially. All statements other than statements of historical fact included in this release, including, without limitation, statements regarding potential mineralization and geological merits of the Dunwell Project and other future plans, objectives or expectations of the Corporation are forward-looking statements that involve various risks and uncertainties. There can be no assurance that such statements will prove to be accurate and actual results and future events could differ materially from those anticipated in such statements. Forward-looking statements are based on a number of material factors and assumptions. Important factors that could cause actual results to differ materially from the Corporation's expectations include actual exploration results, changes in project parameters as plans continue to be refined, results of future resource estimates, future metal prices, availability of capital and financing on acceptable terms, general economic, market or business conditions, uninsured risks, regulatory changes, defects in title, availability of personnel, materials and equipment on a timely basis, accidents or equipment breakdowns, delays in receiving government approvals, unanticipated environmental impacts on operations and costs to remedy same, and other exploration or other risks detailed herein and from time to time in the filings made by the Corporation with securities regulators. Although the Corporation has attempted to identify important factors that could cause actual actions, events or results to differ from those described in forward-looking statements, there may be other factors that cause such actions, events or results to differ materially from those anticipated. There can be no assurance that forward-looking statements will prove to be accurate and accordingly readers are cautioned not to place undue reliance on forward-looking statements.