American Creek Resources Ltd. (TSXV: AMK) ("the Company") is pleased to present results of the Initial Mineral Resource Estimate for the Goldstorm and Copper Belle Zones at their flagship property, Treaty Creek. The Property is located within the heart of the Golden Triangle of Northwestern British Columbia which is on-trend from Seabridge's KSM Project located five kilometres southwest of the Goldstorm Zone. A total of 218 drill holes totaling 105,658.8 metres were used in the Mineral Resource Estimate completed by P&E Mining Consultants Inc. (P&E). The constraining open-pit shell contains 14.15 million ounces of Measured and Indicated gold equivalent ounces ("AuEq") at an average grade of 0.72 gpt AuEq and 5.26 million Measured and Indicated AuEq ounces at an average grade of 0.80 gpt AuEq for the out-of-pit Mineral Resources. Cut-off grades of 0.30 gpt AuEq were used inside the constraining open-pit shell and a higher cut-off grade of 0.46 gpt AuEq was used for the out-of-pit Mineral Resource Estimate which includes underground constrained blocks. The Goldstorm Zone remains open in all directions and at depth. The effective date of the Mineral Resource Estimate is March 1, 2021. A Technical Report prepared in accordance with National Instrument 43-101, Standards of Disclosure for Mineral Projects, will follow within 45 days of this news release and this will be posted on SEDAR and the Company's website.

Tudor Gold's Vice President of Exploration and Project Development, Ken Konkin, P.Geo., stated: "We are very pleased with the results obtained from our Initial Mineral Resource Estimate. Only 10-12 % of the gold equivalent values are attributed to silver and copper mineralization indicating a strong gold-dominate system. However, due to the immense volume of the system, it contains large quantities of silver and copper. Further studies are required to investigate the potential economic impact of these two metals. Our preliminary metallurgical test work shows excellent gold recoveries to a gravity + flotation concentrate. From four composite tests, gold recoveries averaged 96.2% in pyrite concentrates with overall gold recoveries after concentrate extraction expected to be on the order of 88%. The mineralogical studies also demonstrated that no deleterious elements such as As, Sb or Hg were detected within the Goldstorm and Copper Belle Zones. The four tests were carried out by BV Minerals Metallurgical Division and supervised by metallurgical consultant Frank Wright, P.Eng.

Our plans for 2021 are to complete the drilling of the Goldstorm Zone; to define the limits of the 300 Horizon, the CS-600 and DS-5 Zones. In-addition, diamond drilling is planned for the Eureka and Perfect Storm Zones. We believe that the Treaty Creek Property contains excellent potential for continued discovery of gold-silver-copper systems such as Goldstorm." 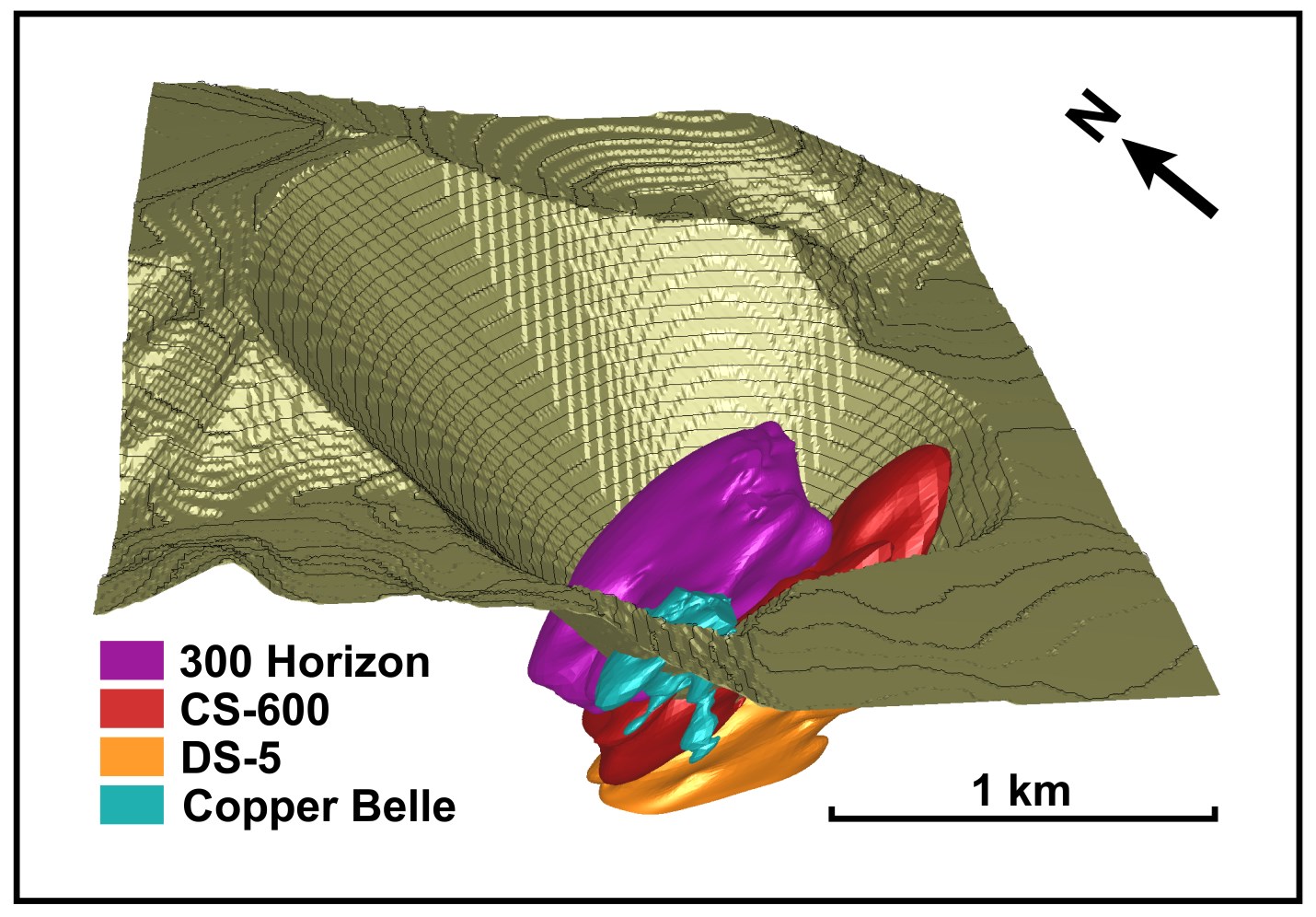 Walter Storm, President and CEO, stated: "We are extremely pleased with our exploration efforts and the resulting Initial Mineral Resource Estimate indicating that Treaty Creek could be one of the world's largest gold discoveries of the decade. We completed a very difficult exploration year under strict COVID-19 protocols and maintained an excellent safety record. The Goldstorm Zone remains open on all fronts and to depth, and our priority for 2021 will be to complete the drilling to the Northeast and Southeast limits as well as to depth. The objective will be to convert as much of the 7.9 million ounces of Inferred Mineral Resource averaging 0.79 gpt AuEq to Measured and Indicated Resource classifications, in addition to finding the limits to the mineralized zones within the Goldstorm Zone. Our geological team is currently planning the 2021 exploration program that will also include drilling of the newly discovered Perfect Storm Zone as well as the Eureka Zone. The goal is to add to the current Au-Ag-Cu Mineral Resource of Treaty Creek".

Darren Blaney, CEO of American Creek, commented: "We are thrilled with this initial resource estimate as it not only ranks as one of the largest gold discoveries in the past decade, but is also the reward for many years of perseverance, dedication and effort by all involved. We wish to congratulate and thank the Tudor Gold team and More Core drilling team for their expertise and dedication in making this possible. We also sincerely thank our shareholders for their significant and ongoing support over the years and we are excited to share in this accomplishment together. Equally exciting is that the Goldstorm zone remains open in all directions and at depth. Further, there is significant potential for other discoveries on the property with Tudor now formulating plans to drill those areas in the upcoming drill program." 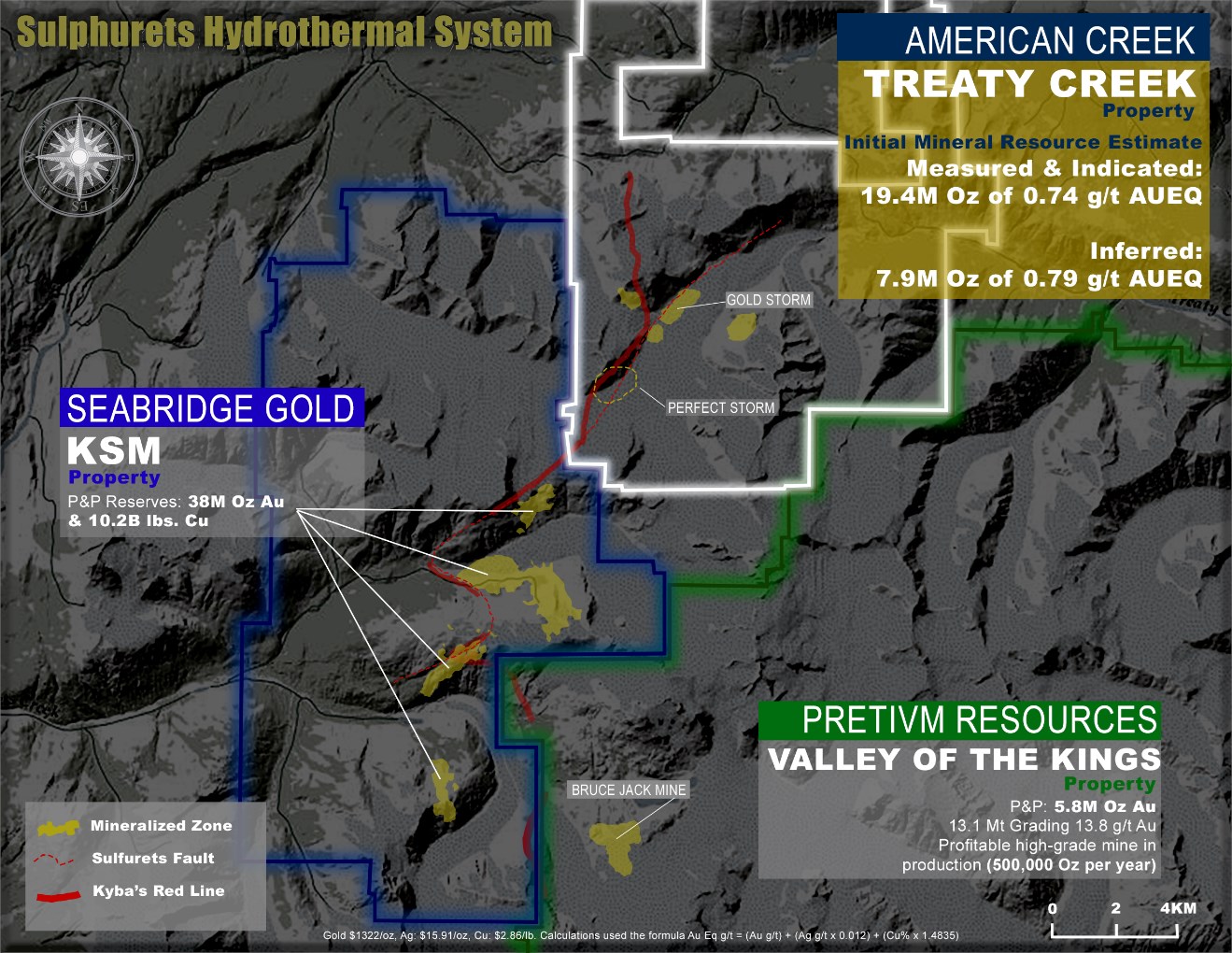 Drill core samples were prepared at the MSA Laboratories ("MSA") Preparation facility in Terrace, BC and assayed at MSA's Geochemical Laboratory in Langley, BC. Analytical accuracy and precision are monitored by the submission of blanks, certified standards and duplicate samples inserted at regular intervals into the sample stream by Tudor Gold personnel. MSA Laboratories quality system complies with the requirements for the International Standards ISO 17025 and ISO 9001. MSA is independent of the Company.

Eugene Puritch, P.Eng. of P&E Mining Consultants Inc. is the Qualified Persons, as defined in National Instrument 43-101 Standards of Disclosure for Mineral Projects, who have reviewed and approved of the scientific and technical disclosure in this news release. Mr. Puritch is independent of the Company.

The Qualified Person for this news release is James A. McCrea, P. Geo., for the purposes of National Instrument 43-101. While American Creek has not independently confirmed Tudor's information, Mr. McCrea has read and approved the scientific and technical information that forms the basis for the disclosure contained in this news release.

The Company has an interest in the Treaty Creek property, a joint venture project with Tudor Gold/Walter Storm located in BC's prolific "Golden Triangle".