American Creek Resources Ltd. (TSXV: AMK) ("the Corporation") is pleased to present the third set of results for the 2021 resource expansion and definition drilling program conducted by JV operator Tudor Gold for the Goldstorm Deposit at their flagship property, Treaty Creek. The project is located in the heart of the Golden Triangle of northwestern British Columbia and is on-trend from Seabridge's KSM Project located five kilometers southwest of the Goldstorm Deposit. Results from four diamond drill holes have recently been received from MSA Labs. Exploration at Treaty Creek is ongoing.

The complete list of composited drill hole results as well as the drill hole data including hole location, elevation, depth, dip and azimuth are provided in Table 1 and Table 2, respectively.

Please click on the following link to view: Plan Map and Cross Sections for the drill holes reported in this news release.

Tudor Gold's Vice President of Exploration and Project Development, Ken Konkin, P.Geo., states: "We are extremely pleased with our continued success with our step-out drilling at the Goldstorm Deposit. Due to the success of hole GS-21-119 we plan to step-out further to the northeast before the end of this year's drilling. This program demonstrates the emergence of higher-grade pulses of gold mineralization within the 300 Horizon and a distinct central enriched gold zone within the DS-5 domain. Similar enriched zones of copper mineralization within the CS-600 domain are also apparent. These are "zones within zones" that give our domains a new common dynamic characteristic. Continued drilling is required to better define and potentially expand these enriched pulses within our broad mineralized domains."

"In addition, we confirmed that a significant gold system exists at the Eureka Zone with mineralization occurring near surface, which terminates in a regional thrust fault at depth. An interesting aspect of the Eureka system is that the gold mineralization ends in what may be the same thrust fault that truncates the DS-5 system at Goldstorm. The attached drill section shows the spatial relationship between the Goldstorm Deposit and the Eureka Zone (Regional Section - Goldstorm to Eureka). The current geological interpretation is that the DS-5 domain may connect to the Eureka Zone which adds another dimension to the potential size of the Goldstorm Deposit. Eureka drill hole EK-21-01 contains an enriched central zone averaging 1.13 g/t AuEq over 67.5 meters that lies within 217.5 meters grading 0.76 g/t AuEq. Similarly, in drill hole GS-21-119, the DS-5 contains an enriched central core of gold mineralization that yields an impressive 1.76 g/t AuEq over 196.5 meters within the overall intercept of 1.09 g/t AuEq over 564.0 meters. Due to the success of the step-out exploration drilling at the Goldstorm Deposit, the Eureka drill was dispatched to continue the step-out drilling to the northeast at Goldstorm.

Our primary goal remains to find the limits to the Goldstorm Deposit and to constrain the resources from our Initial Mineral Resource Estimate of 19.41 million ounces of Measured and Indicated and 7.9 million ounces of Inferred gold-equivalent ounces. We continue to intercept exceptional mineralization within the defined domains and consistently identify extensions to these domains particularly to the northeast and northwest, as well as at depth. Clearly, more drilling is required to further define the Goldstorm, Eureka and Perfect Storm Zones for 2022."

Walter Storm, Tudor Gold President and CEO, stated: "We are very excited to see the continuing expansion of the Goldstorm Deposit to the northeast with the release of these exceptional drill results. The geological potential of the Treaty Creek Project is growing with each new drill hole. All drill holes that have reached their targeted depths have encountered significant precious metal mineralization. One very important aspect about the furthest step-out drill hole GS-21-119, is that this vertical hole ended in gold mineralization at 1290 meters. This hole had to be abandoned as the ice pad became too hazardous to continue drilling and worker safety is always our number one priority. The Goldstorm Deposit remains open in all directions and at depth. In addition to this, our exploration team continues to encounter significant gold mineralization in other zones, such as the Eureka Zone. With the news of yet another positive result from Tudor's first hole at the Eureka Zone (EK-21-01), the geological potential of this zone has been up-graded to a priority near surface gold target. This drill hole was started with the largest diameter core possible (PQ), then sized-down to HQ diameter core as the hole progressed. Our drill crews were able to get excellent core recoveries in very fractured ground. We congratulate our drillers for a successful campaign during these difficult times and look forward to releasing additional positive news in the coming weeks as drilling continues to progress extremely well."

Darren Blaney, CEO of American Creek commented: "Treaty Creek drilling continues to impress with not only significant Goldstorm expansion but also with more long higher grade gold intervals. The size of the deposit just keeps growing and growing. The project is in a league of its own. To say we are very pleased is understating the obvious.

The Tudor Gold team continues to work with precision and excellence. We look forward to continuing drills results coming in the weeks ahead."

About the Eureka drill target: 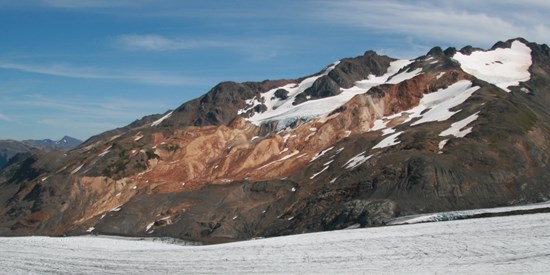 Image of the Eureka Zone

At the Eureka showing, outcrops are cut by veins infilled with fine to coarse-grained quartz, calcite, and pyrite. Veins have steep dips with variable orientations and form weakly sheeted to stockwork zones. In the Eureka zone and surrounding area about 20 holes have been drilled on various targets by previous operators with poor core recoveries. Several long intervals of weakly elevated gold grades were returned, such as 0.46 g/t Au over 169.2 m (DH 97-1) and 0.69 g/t Au, 2.9 g/t Ag over 75.5 m (TC07-02). Additional drilling is required to better define the mineralized areas.

The Qualified Person for this news release for the purposes of National Instrument 43-101 is Ken Konkin, P.Geo. He has read and approved the scientific and technical information that forms the basis for the disclosure contained in this news release.

Drill core samples were prepared at MSA Labs' Preparation Laboratory in Terrace, BC and assayed at MSA Labs' Geochemical Laboratory in Langley, BC. Analytical accuracy and precision are monitored by the submission of blanks, certified standards and duplicate samples inserted at regular intervals into the sample stream by Tudor Gold personnel. MSA Laboratories quality system complies with the requirements for the International Standards ISO 17025 and ISO 9001. MSA Labs is independent of the Company.

The Corporation has an interest in the Treaty Creek property, a joint venture project with Tudor Gold/Walter Storm located in BC's prolific "Golden Triangle".