Beauce Gold Fields (Champs D'Or en Beauce) (TSXV: BGF), ("BGF"), is pleased to announce that it has acquired through map staking, a portfolio of prospective placer to hard rock gold anomalies throughout southern Quebec. The Beauce, the Megantic and Quebec's Eastern Townships are considered to be the most suitable regions for the discovery of gold deposits near or under former gold placers. 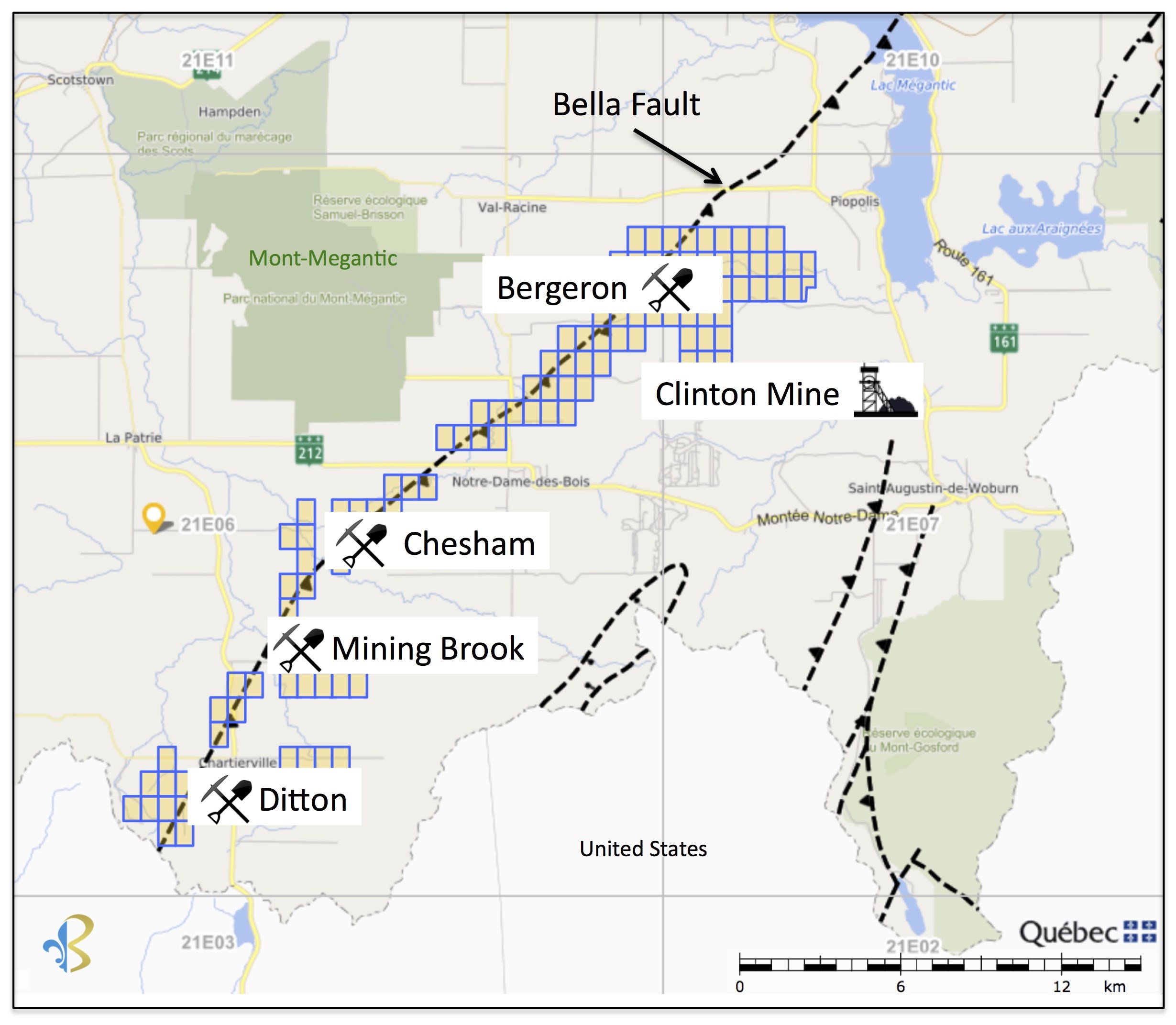 The Mégantic property is limited to the southwest by the American border of New Hampshire and to the northeast by Lac Mégantic. The property extends for at least 30 km along the axis of the Bella Fault. It is divided into four areas: the Ditton, the Mining Brook, the Chesham and Bergeron rivers.

The Mégantic property is located at the foot of the granite intrusion of Mont Mégantic. It partly occupies the Compton Formation composed of graphitic and pelitic metasedimentary rocks of Siluro-Devonian age. These sedimentary rocks are in discordant contact in the center of the terrain with the volcanic facies (basalts, andesites and dacites) of the Siluro-Devonian Formation of the Frontenac Formation. The Bella fault, which is the major structural element of the Mégantic property, is in contact between the Compton and Frontenac Formations. Observations at Mount Saddle suggest several intrusive phases that would be favourable to the establishment of gold mineralization.

Types of gold mineralizations in rocks:

1) In quartzo-feldspathic porphyry dykes intersecting the sediments of the Compton Formation north of the Mégantic Property. The following grades were obtained on samples taken at random: Au = 498.16 g / t Au = 12.0 g / t Au = 24.0 g / t (M B 86-05).
2) Associated with lens base metal mineralization known in the Frontenac Formation at the former Clinton mine. These mineralization's would be in lenticular form. The sulphides would be of syngeneic origin and would have been remobilized during the Appalachian orogeny in preferential zones. From 1974 to 1975 approximately 114.478 tonnes at 2.6% Cu, 2.5% Zn, 0.47% Pb, 31.44 g / t Ag and 0.41 g / t Au would have been extracted.
3) The presence of gold-bearing quartz veins intersecting the more competent gabbroic sills. This type is known in the township of Bellechasse (Timmins-Zone 88 Gold Deposit)

Mineralizations associated with the bella fault:

GM 39251: An intersection anomalous in gold over an apparent thickness of 2.5m was found in a C-1 diamond drill hole. It is located near the village of Chartierville and directly connected to the Bella fault. The anomalous zone is found in a grauwacke bed, with medium grains and containing 15 to 20% of pyrite in coarse cubes and a band of black argillite injected by quartz / carbonate veins.
GM 42843: In the diamond drill hole S-2 visible gold was observed at 240m deep. The borehole was sited a few km east of the Mining Brook. The gold is associated in a quartz vein intersecting a sheared zone located in the volcanic of the Frontenac Formation. More diamond drilling is then recommended to test these highly sheared and favorable zones. These could harbor gold-bearing quartz veins, which are believed to be the source of the gold currently found at the Mining Brook.
GM 51398: There were 5 vertical churn drill holes in the overburden including one hole n ° 7 which returned interesting gold values ​​between 11 and 21m deep. This drilling would have identified an old channel near the Bella fault.

What attracted Beauce Gold Fields attention to this region are the past occurrences and mining of alluvial gold in some streams and small rivers, including the Mining Brook located some five km north of Chartierville. It has been reported in the past Goodwin (1933) that over 25,000 ounces of gold was mined from just a small stretch of Mining Brook.

GM 48717: Surface gravel in the Chesham River area is reported to contain flake gold. The deeper gravels contain quite a few nuggets which sometimes reach several grams. Gold grains were recently found in a gravel pit on the Mégantic property. The gold reveals very accentuated roughness indicating that it has traveled little. It is assumed that the source of the alluvial gold would be in the volcanic rocks of the Frontenac Formation.

GM 45387: A large quantity of "delicate" fine gold was noted in old excavations along the Bergeron river, thus suggesting a not far distant primary source. The bedrock of the Bergeron river is made up of the components of the Frontenac Formation, that is to say slate schists, bands of basic metavolcanites and gabbro-dioritic sills. These gabbro intrusions may contain veins of quartz mineralized in gold comparable to Timmins-Bellechasse Deposit.
GM 53498: Work carried out by Noranda Mines and Exploration between 1993-1995 established copper, zinc and silver soil anomalies which appear to be continuous over significant distances. One of these anomalies is over 1.8 km in length. It was recommended at the time to make trenches targeting sediment-volcanic contact (Bella fault).

Other Placer Gold Properties Staked and Sampled in Southern Quebec:

Jean Bernard, B,Sc. Geo., is a qualified person as defined by NI 43-101, has reviewed and approved the technical information presented in this release.

Beauce Gold Fields is a gold exploration company focused on placer to hard rock exploration in the Beauce region of Southern Quebec. The Company's flagship property is the St-Simon-les-Mines Gold project site of Canada's first gold rush that pre-dates the Yukon Klondike. The Beauce region hosted some of the largest historical placer gold mines in Eastern North America that were active from 1860s to the 1960s It produced the largest gold nuggets in Canadian mining history (50oz to 71oz)

The Company has identified a major Fault Line that coincides with an interpreted fault structure across the property. Evidence suggests the erosion of the Fault Line as a probable source of the historical placer gold channel.