Drilling to Find The HardRock Source of Historic Placer Gold

29 sand and gravel samples of glaciofluvial material were collected from a sand pit quarry, which was active in the 1980s. BGF returned to this area to further explore around the site were a fine sand sample taken in 2020 returned more than 10 g / t Au (BGF press releases of April 23, 2021)

The sand & gravel deposit covers an area of ​​more than 6 hectares. It is located approximately 100m west of Chesham Creek and to the south of Mont-Mégantic.

Sampling was undertaken using a medium-sized excavator (approximately 30 to nnes). The thickness of the deposit varies between 1m to more than 8 meters deep. The maximum extension of the excavator's boom could not exceed 7m in depth therefore in some places, it could measure more than 8m. The sedimentary sequence of the entire deposit consists mainly of medium to fine sand from the top down to gravel at its base. The 2021 excavations at times reached, after having crossed the layers of sand-gravel, beds of clay, bedrock or a water table that would fill the trenches. In October 2021, a stratigraphic cut of approximately 2.0m in height was sampled down an escarpment of the quarry. It intersected the section where the 10g/ton Au #798541 2020 sample was collected.

10 samples taken from an operating gravel pit located near the town of La Patrie in Ditton township. The part of the quarry occupies approximately an area of ​​0.5 hectares. A series of 10 sand and gravel samples were taken along the walls and under the floor of the gravel pit. Vertical thicknesses of the sand & gravel deposit varied from 2m to more than 13m.

Sample SB16, which was taken at random from the gravel by BGF, showed the presence of a very coarse gold grain that measured more than 4mm. 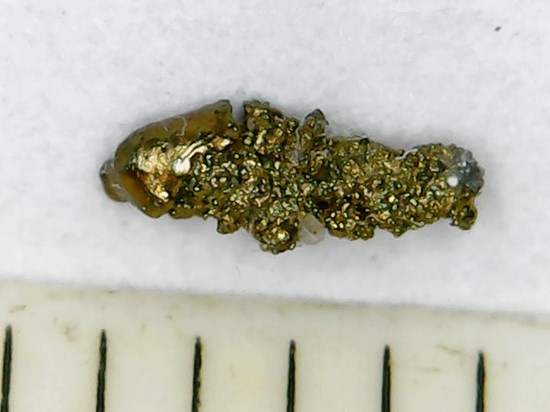 This sector was quickly identified as a priority target, based on previous geophysics, mapping, and trenching work. Notably, the 2020 work by Marc Richer Lafleche PhD Geo., of INRS who identified the presence of visible gold in the trenches TR-2020-01 (Bulk A), TR-2020-02 (Bulk B) and TR-2020-05 (Bulk C). These trenches are spaced more than 200m apart and oriented on an NNE-SSW axis (BGF press release May 12, 2021).

All these 19 holes were drilled along the main mineralized structure (containing gold, arsenopyrite, pyrite, chalcopyrite, sphalerite) covering an area of 1000m in length and by 350m in width. This structure remains open laterally. Many holes have been spaced 30m between the trenches. Others were drilled below tunneling found on the property from the St-Gustave placer gold mine operated by Champs-D'Or Rigaud-Vaudreuil company in the 1910s.

Two step out drill holes (SM-21-26, Sm-21-27) intersected a stockwork zone beneath an outcropping northeast of Rang Saint-Gustave near the Gilbert River. Several blue quartz veins have been noted and sampled for gold.

The nine holes (SM-21-01,16 ,20, 21, 22, 23, 24, 34 and 35) were drilled under the Tr-10008 trench (BGF press release January 1, 2019) and the extensions of the anomalous gold zone. Drilling indicates that this zone is developing at depth and laterally and that it would be open on each side of the trench. The arsenopyrite, pyrhotite and chalcopyrite mineralization are more significant in certain holes.

Drilling from the St-Gustave and Poulin areas confirms that the mineralization at Saint-Simon-les-Mines is hosted within a ductile deformation zone which developed mainly in the axial planes of anticline folds. The heterogeneity of the rocks and the contrasting lithological competencies allowed the development of fractured zones which favoured the circulation of mineralizing fluids.

Another region that has been investigated is located approximately 700m northeast of Rang Saint-Gustave. A series of four boreholes (SM-21-30 to SM-21-34) were oriented along an NNE-SSW axis which is approximately 450 meters long. The purpose of these holes was to test bedrock structures below the strong placer gold values obtained in the past in the gravels of a small tributary of the Gilbert River (Section G-80-A, 3.65g/m3 Au, 1987 GM46544).

Six boreholes (SM-21-2, 4, 36, 37 and 38) were drilled to test structures below sections of the historical placer channel that was mined by a dredging operation in the 1960s. The drilling was also oriented to verify some of the highest gold grades recorded by historical overburden drilling (BGF press release January 21, 2021). Some holes have mineralized quartz veins which will be analyzed. Borehole SM-21-04 was designed to test an induced polarization anomaly.

The drill program is supervised by Jean Bernard, B,Sc. Geo and is a qualified person as defined by NI 43-101, that has reviewed and approved the technical information presented in this release.

2D inversion model of the electrical resistivity and electrical chargeability (induced polarisation) data of Line 2 intersecting the Gilbert river in the sector of the confluence with the Giroux creek. The strong IP anomalies coincide with folded rocks near the river 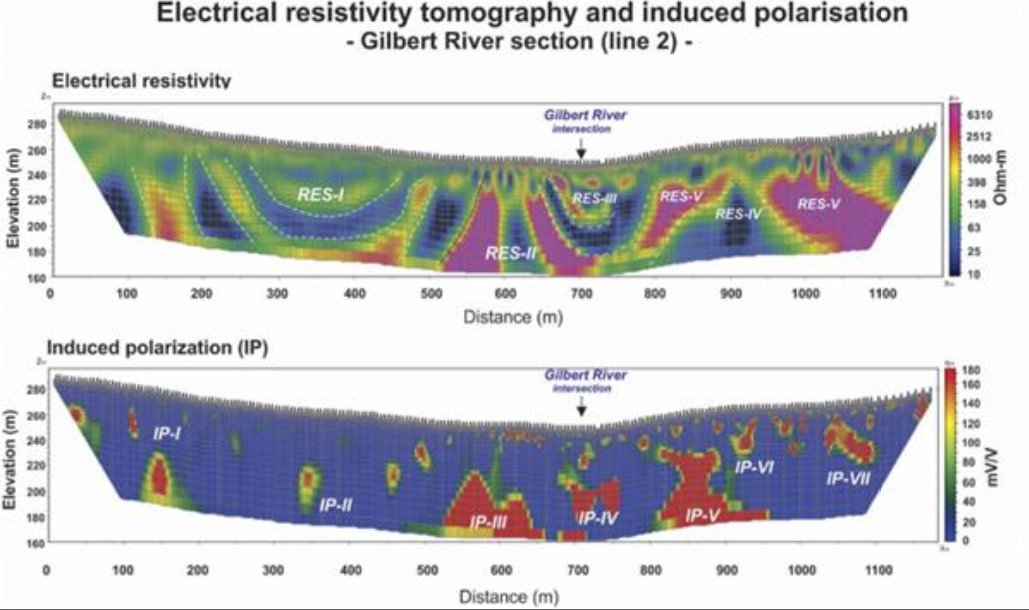 The presumed sulphide mineralisation may be associated with the presence of gold mineralization in the bedrock similar to the visible gold extracted from quartz-rich volcaniclastic rocks associated with the exposed fault line at the Poulin trench located 1.5 km east of Giroux Creek 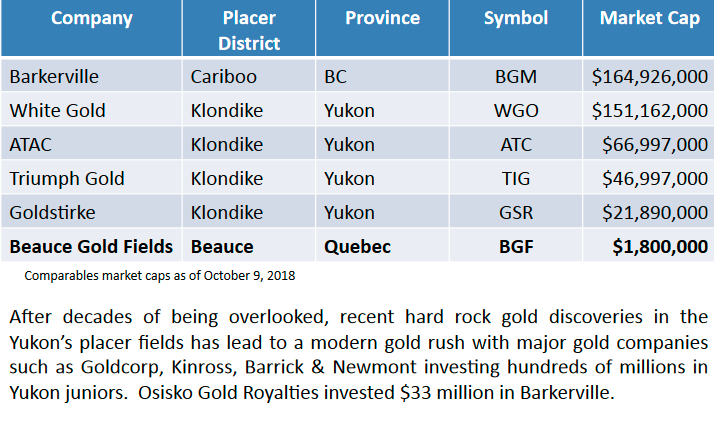 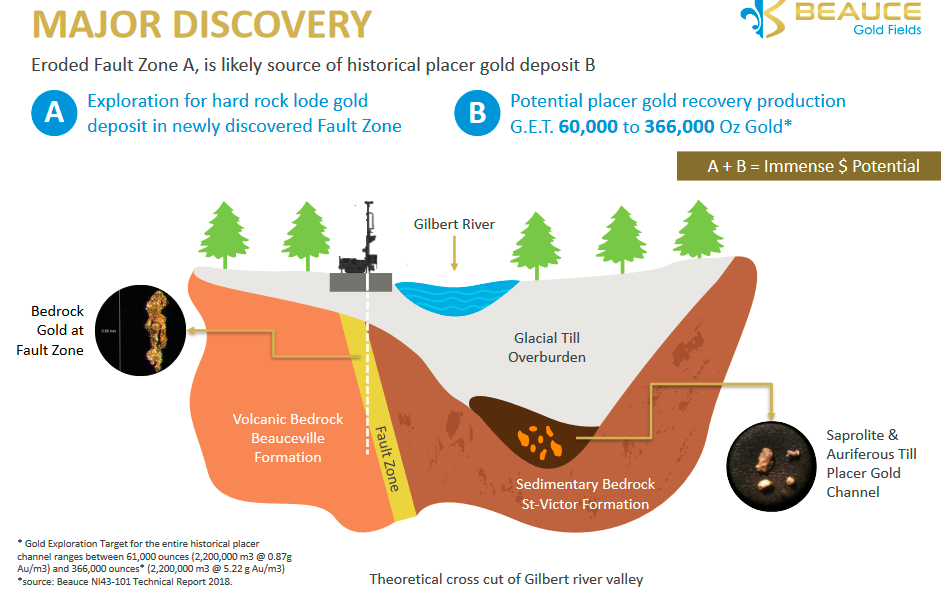 general The Beauce district is located in southern Quebec and experienced a gold rush in the late 1800s that subsequently died off. Beauce Gold is applying a placer to hard rock exploration model to find the source of the placer gold in the Beauce district.

In 1985 that the Provincial government took back mineral rights from property owners and made the region of southern Québec open to exploration to mining companies and Beauce Gold Fields is the first company to completely cover the historical placer gold deposit and to hold an area of significant claims to search for a hard rock source. They have no peers in the area.

The 176-acre Beauce Gold Fields project is comprised of 152 wholly-owned claims that host a six-kilometer-long unconsolidated gold-bearing sedimentary unit. The property also hosts numerous historical gold mines that were active between the 1860s and the 1960s.

The Beauce Gold Fields project is located near Saint-Simon-les-Mines in the Beauce region in southern Quebec. The property is an hour’s drive south of Quebec City and 15 kilometers north of St-George de Beauce. The project is accessible year-round by paved and gravel roads.

Beauce Gold Fields was formed following a spin-out from parent company HPQ Silicon, formerly known as Uragold. In 2013, Uragold was evaluating the size of the historical placer gold deposit and discovered that this was not a pre-glacial alluvial deposit but rather an auriferous till and saprolite.

·         The delicate nature of the gold grains drilled up from the auriferous till as well as quartz markings suggest a close proximity source of gold.

May 2017, Beauce Gold completed a Geophysical Study on the Property and Identified a Significant Fault Beneath the Beauce Placer Company’s Former Placer Gold Mining Operation.

·         The results show that the fault is in alignment with old placer gold mines.

August 2019, Beauce Gold Announced the Results of its Geoelectric Survey at its Property.

The Mégantic property is limited to the southwest by the American border of New Hampshire and to the northeast by Lac Mégantic. The property extends for at least 30 km along the axis of the Bella Fault. It is divided into four areas: the Ditton, the Mining Brook, the Chesham and Bergeron rivers.

The Mégantic property is located at the foot of the granite intrusion of Mont Mégantic. It partly occupies the Compton Formation composed of graphitic and pelitic metasedimentary rocks of Siluro-Devonian age. These sedimentary rocks are in discordant contact in the center of the terrain with the volcanic facies (basalts, andesites and dacites) of the Siluro-Devonian Formation of the Frontenac Formation. The Bella fault, which is the major structural element of the Mégantic property, is in contact between the Compton and Frontenac Formations. Observations at Mount Saddle suggest several intrusive phases that would be favourable to the establishment of gold mineralization.

What attracted Beauce Gold Fields attention to this region are the past occurrences and mining of alluvial gold in some streams and small rivers, including the Mining Brook located some five km north of Chartierville. It has been reported in the past Goodwin (1933) that over 25,000 ounces of gold was mined from just a small stretch of Mining Brook.

GM 48717: Surface gravel in the Chesham River area is reported to contain flake gold. The deeper gravels contain quite a few nuggets which sometimes reach several grams. Gold grains were recently found in a gravel pit on the Mégantic property. The gold reveals very accentuated roughness indicating that it has traveled little. It is assumed that the source of the alluvial gold would be in the volcanic rocks of the Frontenac Formation.

GM 45387: A large quantity of "delicate" fine gold was noted in old excavations along the Bergeron river, thus suggesting a not far distant primary source. The bedrock of the Bergeron river is made up of the components of the Frontenac Formation, that is to say slate schists, bands of basic metavolcanites and gabbro-dioritic sills. These gabbro intrusions may contain veins of quartz mineralized in gold comparable to Timmins-Bellechasse Deposit.
GM 53498: Work carried out by Noranda Mines and Exploration between 1993-1995 established copper, zinc and silver soil anomalies which appear to be continuous over significant distances. One of these anomalies is over 1.8 km in length. It was recommended at the time to make trenches targeting sediment-volcanic contact (Bella fault). 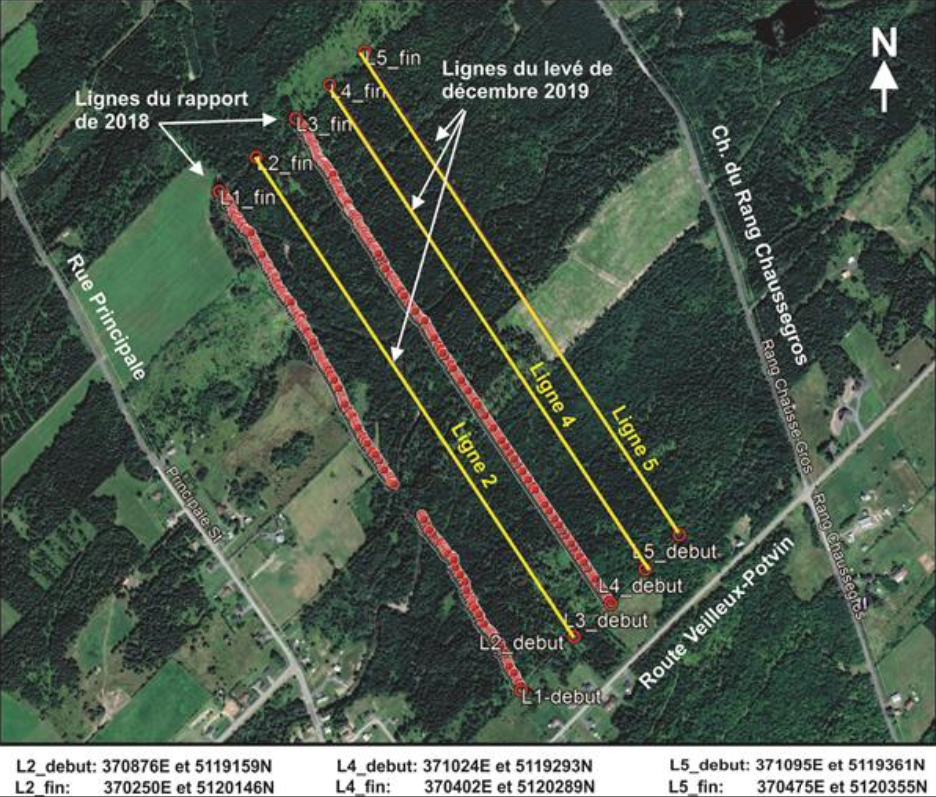