Chauncey Gardiner
Rank: President [?]
Points: 8711 [?]
Votes: 199 Score: 3.5 [?]
Your Vote:
Please Log In to Vote
Follow
Did you know? You can earn activity points by filling your profile with information about yourself (what city you live in, your favorite team, blogs etc.)

Vancouver, British Columbia--(Newsfile Corp. - August 14, 2019) - Bravada Gold Corporation (TSXV: BVA) (the "Company" or "Bravada") reports that it has received all assays from a recently completed Phase I, two-hole (878m total), reverse-circulation drilling program at the Company's SF property, located ~6km east of Barrick's Goldrush development-stage gold mine in the prolific Cortez district. These are the first holes to be drilled on the SF property and targeted mineralized Wenban Formation rocks beneath a broad, poorly exposed "hanging wall" anticline in the Horse Canyon Formation where the Company had previously collected widely scattered rock-chip float samples that contain anomalous gold (50 to +100ppb Au) and arsenic (+100ppm As).

Drilling successfully intersected anomalous gold and base-metal mineralization within alternating Horse Canyon and Wenban stratigraphy (see Figure 1), which are repeated along a sequence of stacked thrust sheets. The Wenban Formation is well exposed west of the drill holes, is the main host rock at Goldrush and other nearby deposits, and is the conceptual target stratigraphy of current exploration on the property.

The two holes successfully verified the geologic setting of the target and the presence of anomalous gold and base metals. The next phase of work will consist of geophysical testing to refine targeting for the next phase of drilling. 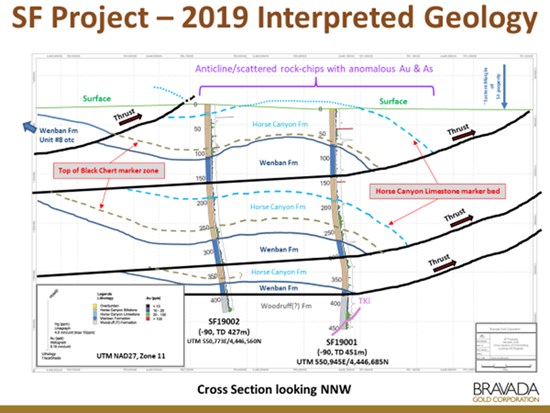 Three thrust sheets were penetrated by the two holes, repeating the transition from Horse Canyon formation to Wenban formation in each. Long intervals of anomalous gold (10 to 100ppb, with rare spikes of +100ppb) and widespread anomalous base metals (100 to 439ppm Cu, 200 to 2,738ppm Zn, and less strong anomalies in lead and molybdenum) suggest proximity to an intrusion-related gold/base-metal system. A high correlation between gold and copper suggests the most significant gold deposition should lie outboard (away from) the causative intrusion, which has not been found at surface on the property. Numerous intrusions are exposed at surface in the larger region with ages ranging from Jurassic to Miocene, and planned magnetics geophysics should identify buried intrusions.

A late-stage, or separate, pulse of gold with strong mercury (1 to 10ppm) is suggested by a pattern of more mobile mercury (symbol "Hg") surrounding anomalous gold in the uppermost thrust sheet (see Figure 2). Lateral flow of ore fluids through permeable but carbonate-poor host rocks such as the Horse Canyon formation (inefficient gold deposition) typically forms weak gold anomalies well beyond the more restricted regions of major gold deposition in carbonate-rich host rocks such as the Wenban formation (efficient gold deposition). 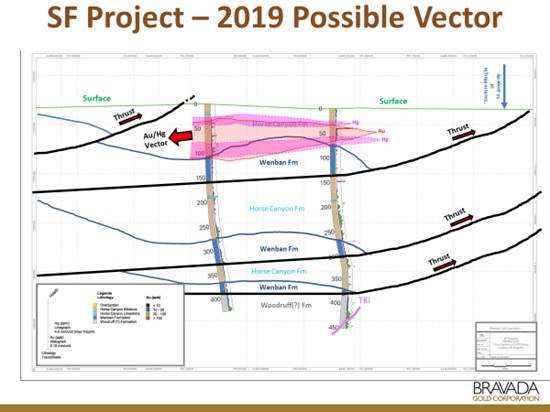 President Joe Kizis commented, "The SF property is located in one of the most productive gold regions of Nevada and these proof-of-concept holes confirm that a hydrothermal system is present in a very similar geological setting to some of the largest gold deposits discovered during the past few decades. Considering the attractiveness of nearby gold deposits and the fact that discoveries in Nevada command a higher premium than discoveries in many parts of the world, we feel that follow-up work is well justified at SF. Specifically, we will be investigating geophysical techniques such as magnetics and IP or CSAMT to identify buried intrusions, areas of silicification, and sulfide enrichment."

Bravada is an exploration company with a portfolio of high-quality properties in Nevada, one of the best mining jurisdictions in the world. The Company has successfully identified and advanced properties that have the potential to host high-margin deposits while successfully attracting partners to fund later stages of project development. With the addition of OceanaGold's option of Highland, four of Bravada's ten Nevada properties are being funded by partners. As well, there are no NSR-type royalties to vendors that cannot be reduced. Bravada's value is underpinned by a substantial gold and silver resource with a positive PEA at Wind Mountain and the Company has significant upside potential from possible new discoveries at its exploration properties, most of which host encouraging drill intercepts of gold and which already have drill targets developed by the Company.

Joseph Anthony Kizis, Jr. (AIPG CPG-11513, Wyoming PG-2576) is the Qualified Person responsible for reviewing and preparing the technical data presented in this release and has approved its disclosure.

On behalf of the Board of Directors of Bravada Gold Corporation