1 Commodity Stock to Buy Now for Long Term Gains -- Hint: It's Not Oil

Oil isn't the only commodity on the cusp of a major turnaround.

The price swings of oil are filling the headlines today. The chatter is almost maddening and amounts to little more than noise. If you really want to watch a commodity that's worth watching, forget oil and start following uranium. And once you do, you'll see that Cameco Corporation (NYSE:CCJ) is the one stock to buy now for long term gains. Here's why.

The first question you have to ask yourself is why this particular commodity? The answer is that uranium is the fuel that drives nuclear power plants. If you are like most people, the mention of nuclear power brings up images of nuclear meltdowns like the one that took place in Fukushima, Japan. While accidents do happen, the truth is that nuclear power runs safely the vast majority of the time. It's kind of like airplanes, you only hear about the crashes, not the millions of safe flights.

The negative image is why some developed nations have chosen to shift away from nuclear power. For example Germany has sworn nuclear reactors off and Japan shut down its entire fleet of nuclear power plants after Fukushima. But here's the thing, Japan quickly realized that it needed those reactors and is now in the process of restarting its shuttered power plants. 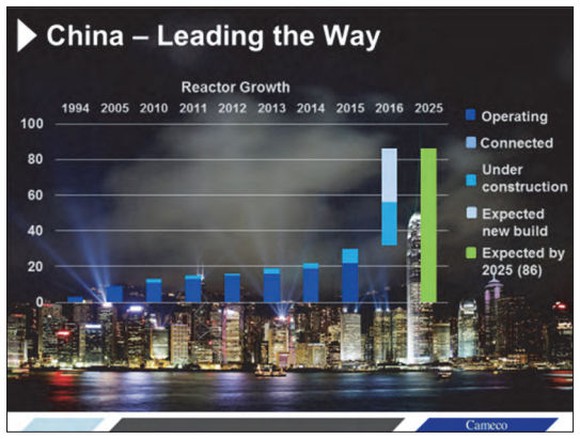 Add in the fact that nuclear power doesn't emit greenhouse gases, and there's even more reason to like the good kind of "nuclear option". Which helps explain why the number of new power plants being built between now and 2025 is expected to easily outdistance the number of power plants being shut down. China is going to be a big player on the construction front, with projections calling for over 80 nuclear power plants in the country by 2025, more than double the number it has up and running today. Although China is working to build it own uranium mines, which will limit how much of the fuel it needs to buy from third parties like Cameco (the company gets about half of its uranium sales from Asia), the big picture is that there's going to be more global demand for uranium, overall.

Supply is another bright spot. Cameco projects that demand will outstrip supply by around 3% this year. And with new power plants coming on, and little new investment in uranium mining, that disconnect should continue to get worse.

So there are fundamental reasons to like the uranium market. Which leads to the next big question... How do you invest in the space? One way would be to buy a large diversified miner like Rio Tinto (NYSE:RIO). But there's a problem with this approach, Rio has its fingers in a lot of different pies and uranium only accounts for about 1% of the company's sales. That's not a great way to get exposure to uranium.

A miner that's focused on uranium is a better bet. And there are a bunch to pick from... but they are mostly small as miners go. For example, Energy Fuels Inc (NYSEMKT:UUUU) is among the largest publicly traded pure plays, but it's still kind of tiny with a market cap of just $120 million or so. That's a little too small for most investors -- I know I would have a hard time sleeping at night if I owned it. Which is why Cameco, and its roughly $4.5 billion market cap, is a far more compelling option.

There's another scale difference worth looking at, too. Cameco sold about 32 million pounds of uranium last year. Energy Fuels, meanwhile, sold around one million pounds. Since the uranium cost curve is relatively flat, with a big spike toward the end, Cameco's larger scale and, perhaps more important, customer reach make it a clear leader in the industry and the best bet for investors looking to play the space.

And one of the nice things about Cameco is that it looks financially strong enough to make it through to better days. Long-term debt makes up around 20% of the capital structure. That should give the miner plenty of financial flexibility to keep spending on key projects without running out of cash. For example, the company's recent spending to ramp up production at its Cigar Lake mine helped reduce its cash costs for mining uranium by 26% year over year in the first quarter. That helped the company keep its uranium costs in check since it also buys uranium to resell, an expense that rose in the quarter. So while times are tough right now, Cameco isn't overextended and where it is spending money is having a positive impact on the bottom line. 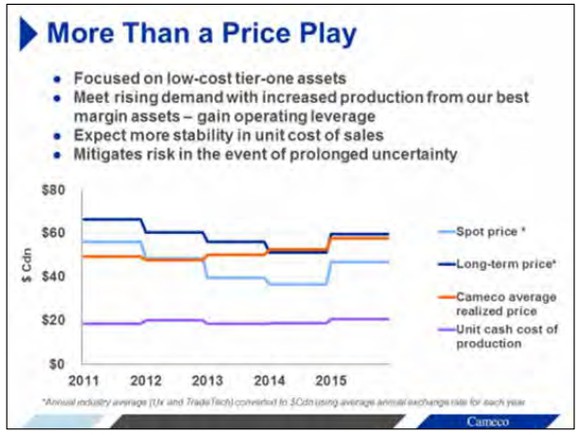 The Cigar Lake investment is actually part of a bigger plan at Cameco. You see the company knows it can't predict the price of uranium, even though it expects better days ahead. So it's working to ensure that it is a low cost producer that can thrive at any price point, refocusing on its lowest cost and most productive assets. In fact, the graph above shows just how well the miner has managed through these tough times, with the purple cost line well below the orange line that represents Cameco's average realized price. More important, it shows visually why, despite the top- and bottom-line hit Cameco has taken from low uranium prices, the company has remained profitable throughout the downturn. The way it goes about creating contracts is a big part of this, as it tries to lock in prices on 40% of its deals and has exposure to market prices with the rest, providing some downside protection while still offering some upside participation.

This isn't a company struggling just to survive, it's one that is using the downturn to get lean and mean so it can prosper today and well into the future. In other words, the company doesn't need higher prices to turn a profit and reward investors (unlike many other miners, Cameco hasn't been forced to cut its dividend). Sure, an uptick in uranium prices is what's really needed to push Cameco stock materially higher, but Cameco appears to be strong enough financially and operationally to do well even if that doesn't come to pass. Demand growth alone, which appears baked in the cake, should be enough to boost results.

If you are watching the commodity market and trying to keep track of the daily gyrations in oil, iron ore, or some of the other headline grabbing basic materials, it's time to step back and take a breather. Those are, indeed, exciting markets, but the outlooks are murky at best. Uranium, meanwhile, is starting to look like it's lived through the worst of its downturn with industry fundamentals hinting that a brighter future is right around the corner. The best pure-play option to take advantage of this is Cameco.

Something big just happened
I don't know about you, but I always pay attention when one of the best growth investors in the world gives me a stock tip. Motley Fool co-founder David Gardner (whose growth-stock newsletter was the best performing in the world as reported by The Wall Street Journal)* and his brother, Motley Fool CEO Tom Gardner, just revealed two brand new stock recommendations. Together, they've tripled the stock market's return over the last 13 years. And while timing isn't everything, the history of Tom and David's stock picks shows that it pays to get in early on their ideas.