Welcome To The Disenco Energy PLC HUB On AGORACOM

doryloads
Rank: Vice President [?]
Points: 7949 [?]
Votes: 76 Score: 3.2 [?]
Your Vote:
Please Log In to Vote
Follow
Did you know? You can earn activity points by filling your profile with information about yourself (what city you live in, your favorite team, blogs etc.)

Welcome and some background

First, this company is still waiting for financing to get the show on the road. One would think with all of the talk on stimulus funds and talk of green technologies that it should not be too much longer. We wait and watch.

Second, I encourage you to go through Disenco's website and see what exciting enterprise they are engaged with.

Third, here is an interesting blog on the stirling engine - which forms the basis of Disenco technology http://wood-pellet-ireland.blogspot.com/2009/08/some-sterling-stirlings.html

What started me reading up on the Stirling engine was research reading I was doing on some new solar energy projects. one of these projects uses a Stirling engine to convert the sun's energy into rotary motion and thus into electricity. I will write about this later on.

Lots of Modern uses for the Reverend Stirling's Invention

A variation of the Stirling engine can be used as a heat pump for refrigeration or air conditioning, when it is driven by an electric motor. There is also a machine called the "Stirling Cryocooler" which is used to liquefy air and other gases.

Wikipedia has a very interesting entry for Stirling engine uses: 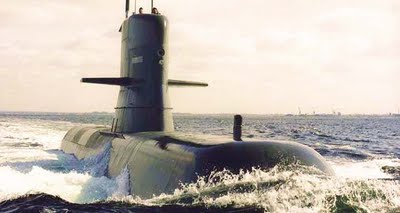 They carry compressed oxygen to allow fuel combustion whilst submerged which provides heat for the Stirling engine. They are currently used on submarines of the Gotland and Södermanland classes. They are the first submarines in the world to feature a Stirling engine air-independent propulsion (AIP) system, which extends their underwater endurance from a few days to two weeks. This capability has previously only been available with nuclear powered submarines."

There is a market in model Stirling engines, and quite a few interest groups around the world. Some of the more spectacular at demonstrating the principle are the little low pressure low temperature engines which can work from the heat of your hand or happily run for months on the heat of an Internet router. The computer component company MSI have developed a Stirling engine that uses the heat of a CPU (Central Processor Unit) to drive the fan which help cools the chip. I does not appear to have reached the shops though, I have been trying to locate a unit to play with and have failed to find one!! 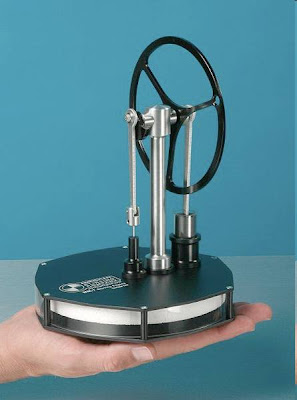 The Stirling principle is used in this toy low-pressure engine 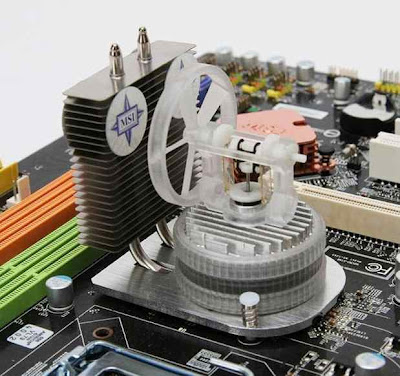 Here is a very novel and practical application of a low pressure Stirling engine
made by MSI used as a CPU cooler fan. (Not available in the shops!!!)
(OOps just spotted this is a NorthBridge cooler not a CPU cooler)

Micro-Generation is a term which is becoming more popular in recent times. Previously it referred almost exclusively to small domestic wind generators. Recently there is a trend to use heat in domestic gas boilers to generate electric power. The companies developing these CHP units claim that it is a a far more economical way of generating electricity than the large scale central model currently in use. 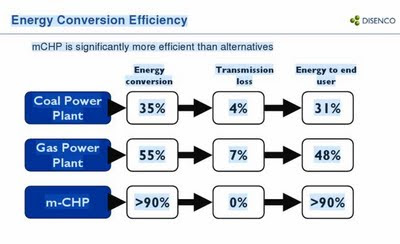 Here are two examples of (CHP) combined heat and power using a modern reincarnation of the Reverend Stirling's engine. The first example is from a UK based company called Disenco. 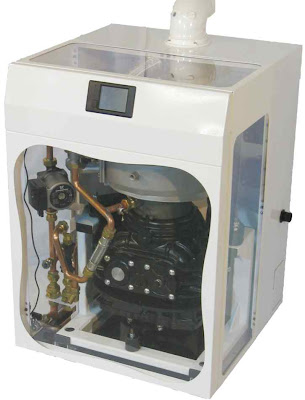 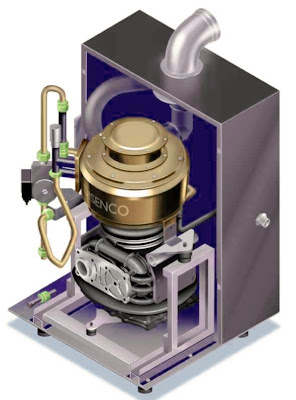 IMHO CHP units would not be of much interest as yet in Ireland , not until smart meters are introduced, where micro-generating units like the above can feed power back into the electricity network and get paid or credited, at a reasonable rate, for the power generated.


Pictured below is a very very similar unit from a New Zealand based company called Whispergen, the idea seem to be catching on in several places at once. 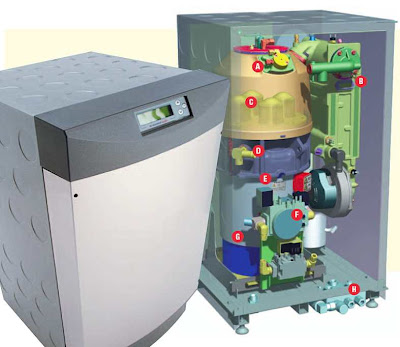 Whispergen are a Zealand based outfit. They do have agents in Europe etc. check out their site, link below. Thanks to Jim O'Riordan for the heads up on this one.

The layout of the CHP unit:
A) Gas burner: flame heats the four cylinder heads of the engine
B) Exhaust heat recovery unit: uses the exhaust heat to heat the water
C) Stirling engine: uses the heat from the burner to push pistons back and forth
D) Water heating: water is further heated as it passes through the engine
E) Wobble Yoke (inside): converts the linear motion of the pistons into
rotating motion for the alternator
F) Gas valve: supplies and regulates the gas to the burner
G) Rotary alternator (inside): generates electricity
H) Water pipe connections: delivers the hot water to the home’s hot water
cylinder and heating system