100% Interest in the Trove and East Barry Properties Adjacent to Osisko, Windfall, Quebec

The drill hole was completed on the northern portion of the Trove Property and was targeted to test a magnetic and Induced Polarization (“IP”) anomaly in the area. The hole was drilled sub-perpendicular to the Rouleau fault which continues onward to the Gladiator deposit of neighbouring Bonterra Resources Inc. (TSX-BTR) and is where the Windfall Lake structure converges. 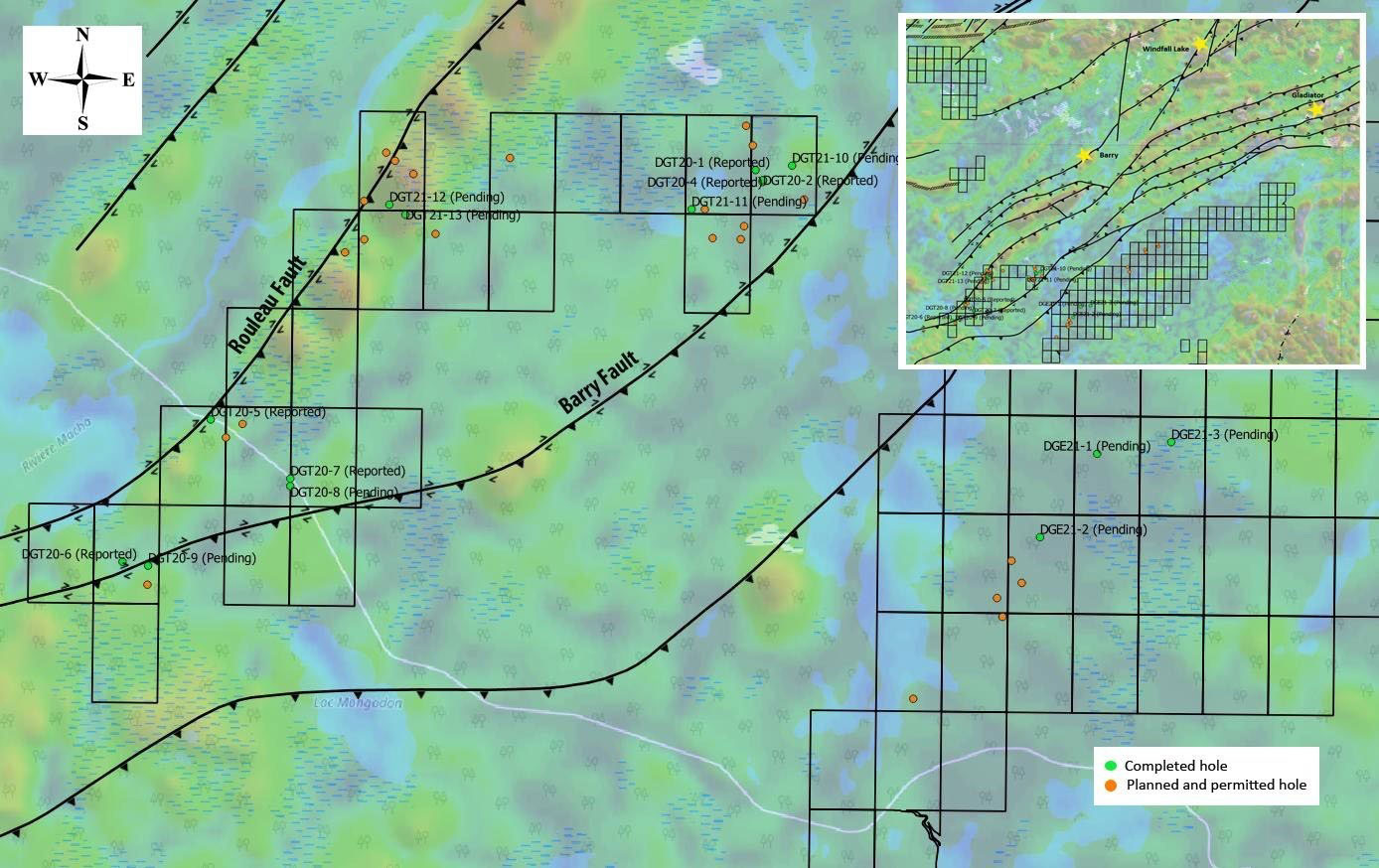 General mineralization consisted of disseminated pyrite and stringers, sphalerite and pyrrhotite associated with shear and alteration zones. The presence of visible silver is an indication that the current drilling is near of a hydrothermal system. Durango plans to continue drilling down dip to test the system.

The drill core has been submitted for lab analysis and results are pending.

Marcy Kiesman stated, “Native silver is encouraging for Durango’s exploration drilling program as it may suggest we are closer to a discovery on the Trove Property. Durango looks forward to continued drilling to further test the area and locate mineralization at lower levels.”

Picture is only meant to be illustrative of ongoing exploration activities. The results of the exploration program can only be quantified through assays from an independent laboratory. Assays will be made public by way of press release(s) once completed and compiled by technical teams and independent contractors.

The technical contents of this press release were approved by George Yordanov, professional geologist, an Independent Qualified Person as defined by National Instrument 43-101. The Trove Property has not yet been subject to an NI-43-101 report.

Durango owns 100% interest in the Trove claims, which are surrounded by Osisko Mining Inc. (TSX-OSK), in the Windfall Lake area between Val d’Or and Chibougamau, Québec. The 1,185-hectare property is compelling due to the coincidence of gold found in tills coinciding with magnetic highs, several Induced Polarization anomalies and two faults crosscutting the property.  The fault systems north and south of the Trove, control gold mineralization elsewhere, indicating the Trove has excellent exploration potential. Durango is currently undertaking its inaugural drill program.

Durango owns 100% interest in the East Barry claims which run parallel to Trove claims. The East Barry block is over 7,740 hectares in size and borders the eastern perimeter of Osisko’s holdings and the southern perimeter of Bonterra’s holdings and is less than 4km south of the Gladiator deposit. The East Barry claims host a gold trend which covers approximately 10km in length and is subparallel to the main Barry Fault held by Osisko Mining. In 2018, a till sampling program was conducted by Durango and one of the till samples returned forty-two (42) pristine gold grains with reported gold values of 2.184 g/t Au.  A high count of pristine gold grains indicates that the gold has travelled a noticeably short distance from its source. The East Barry block underwent an Induced Polarization (“IP”) survey in 2018 which identified a high priority target coincident with the high count of pristine gold grains.

Durango is a natural resources company engaged in the acquisition and exploration of mineral properties. The Company is positioned for discovery with a 100% interest in a strategically located group of properties in the Windfall Lake gold camp in the Abitibi region of Québec, Canada.

For further information on Durango, please refer to its SEDAR profile at www.sedar.com.