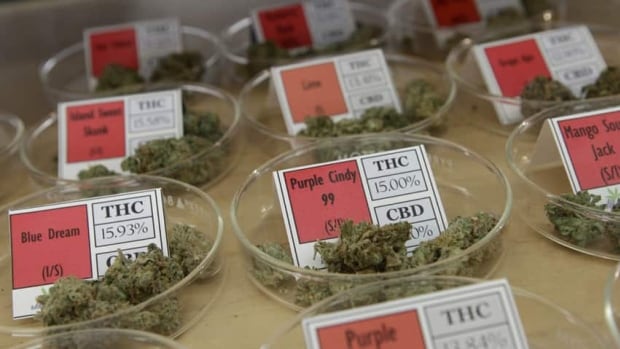 The varying levels of THC in medical marijuana could help to shed light on how safe and effective the drug is for different clinical conditions. (Jeff Chiu/Associated Press)

Medical marijuana users in Quebec can now help shed light on the drug's long-term safety and effectiveness through a new registry at McGill University in Montreal.

McGill said its medical marijuana registry, which launched on Monday, is the first research database of its kind in the world.

The registry meets a requirement of Quebec's college of physicians, which considers cannabis an experimental therapy. Under provincial regulation, cannabis can only be prescribed as part of a formal study.

While cannabis has been studied for years as a recreational substance, little is known about its medical use, said Dr. Mark Ware, director of clinical research at McGill's pain management unit.

"I got frankly tired of giving talks and presentations about the potential medical use of cannabis and always having questions for which I did not have answers," said Ware. "I hope this study is a step in the direction of trying to fill some of these huge knowledge gaps."

The registry allows doctors and users of medical marijuana to look for any possible safety concerns.

It will also allow researchers to look for clues about what variations of medical marijuana might work best for which conditions.

Combining information on the patients and the drugs could not only identify potential safety considerations but also start to answer questions about the effectiveness of cannabis under certain clinical conditions, Ware added.

Despite expanding access to medical marijuana globally, the university calls the project a world first. Ware said to his knowledge no country or region has set up such a prospective, formally approved clinical project.

The researchers hope to engage doctors on the front lines to participate in the research — an approach that could be adapted to study the safety and effectiveness of other drugs over the long term.

The data collected will not have any identifiable patient information to protect patient privacy.

The registry will remain active for at least 10 years and involve thousands of patients. Ware hopes to share the data with other provinces and potentially other countries.