As Toronto Raptors surge in the NBA, their esports team gets major boost 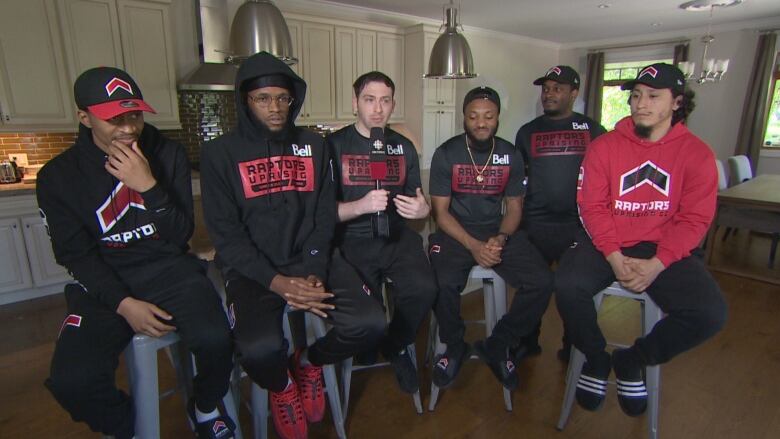 The Raptors Uprising team in Toronto at their state-of-the-art training facility known as the Bell Fibe House. (CBC)

The name Toronto Raptors rolls effortlessly off everyone's lips these days. Their first-ever NBA Finals appearance has made the team a household name in Canada and the world over.

But if you were asked about Raptors Uprising, your most likely answer would be: "Who?" Or, "Raptors what?"

That is, if you're not already an esports aficionado.

Who or what is Raptors Uprising?

Raptors Uprising is the Raptors' esports team in the NBA 2K League — a professional competitive gaming league. Put simply, it's playing the NBA via video game.

Sounds like fun? Sure. But it's also serious business.

"We're about hard work, coming in early, working late, day in and day out," said Frederick Mendoza, one of the six members of the team.

And the money's nothing to sneeze at either. For the 2019 season, teams are competing for $1.2 million in prize money across three tournaments and playoffs.

Aside from the prize money, they don't get paid anywhere near the multi-million-dollar salaries of NBA players.

According to the NBA 2K League website, paycheques are modest.

"All players will be signed to a six-month contract, with first-round draft picks to be paid a base salary of $35,000 and all other players being paid a $32,000 base salary," the website says. All those figures are in U.S. dollars.

And according to league rules, the players' accommodations and travel expenses are paid for by the teams. There's also paid medical insurance and even a retirement plan.

"I really see it as a job. I just play the game and I get paid," Bonte told CBC Toronto. 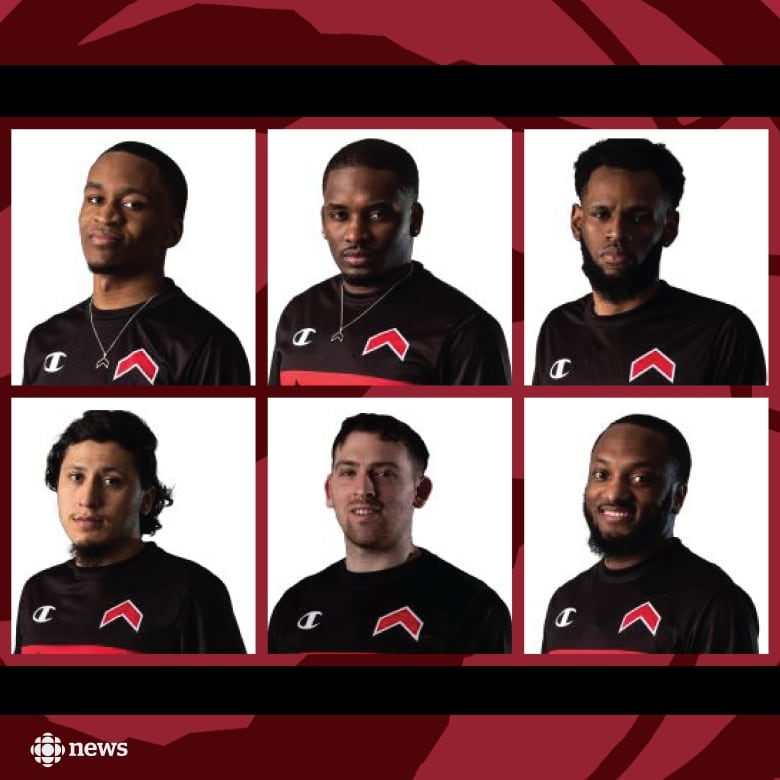 During the inaugural NBA 2K League draft in April 2018, the six players were recruited by the esports management team at Maple Leaf Sports and Entertainment (MLSE), the conglomerate that owns the Raptors, Maple Leafs and Toronto FC..

On completion of the draft, the six moved to Toronto to live and train in the state-of-the-art facility known as the Bell Fibe House.

As part of their weekly routine, the team watches film of previous games to review, analyze and strategize for upcoming games and tournaments. The team also goes through personal fitness training sessions twice a week at SWAT Health in Toronto.

That's to ensure physical fitness levels are at their peak to match their mental preparation for games and tournaments. 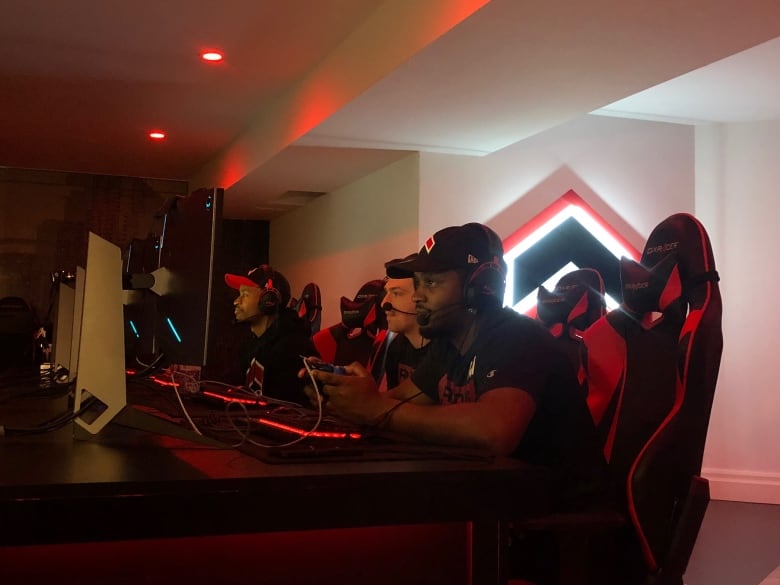 Member of Raptors Uprising train at their state-of-the-art facility in the basement of Bell Fibe House. (Farrah Merali/CBC)

The NBA 2K League is a joint venture between the NBA and Take-Two Interactive. The professional esports league features the best NBA 2K players in the world. It's made up of 17 teams — each drafting six players to compete as unique characters in 5-on-5 play against the other teams in a mix of regular-season games, tournaments and playoffs.

The 2019 season began on Tuesday, April 2, and runs for 18 weeks, concluding on Saturday, Aug. 3 with the 2019 NBA 2K League Finals. All teams are operated by NBA franchises.

This week, the league will take THE TICKET tournament to Orlando as teams battle, not just for the big purse prize — $240,000 — but for an automatic spot in the 2019 NBA 2K League postseason.

Riding the wave of Raptors success

Meanwhile, as the season progresses, Harris says the Raptors Uprising team has been energized by the success of the Toronto Raptors in the NBA, and their dramatic entry into the finals.

"The energy is amazing here and we can translate that to 2K all the time," Harris told CBC Toronto at Bell Fibe House.

"Right now, we're trying to make this push, to use this energy from the Raptors and turn this around. I believe in my guys and I definitely believe something big is going to happen."

The team members say more people have been tuning in to watch the NBA 2K League on TV sports channels and more and more fans are now recognizing them in public, requesting selfies, just showing them love, or inquiring about the league. 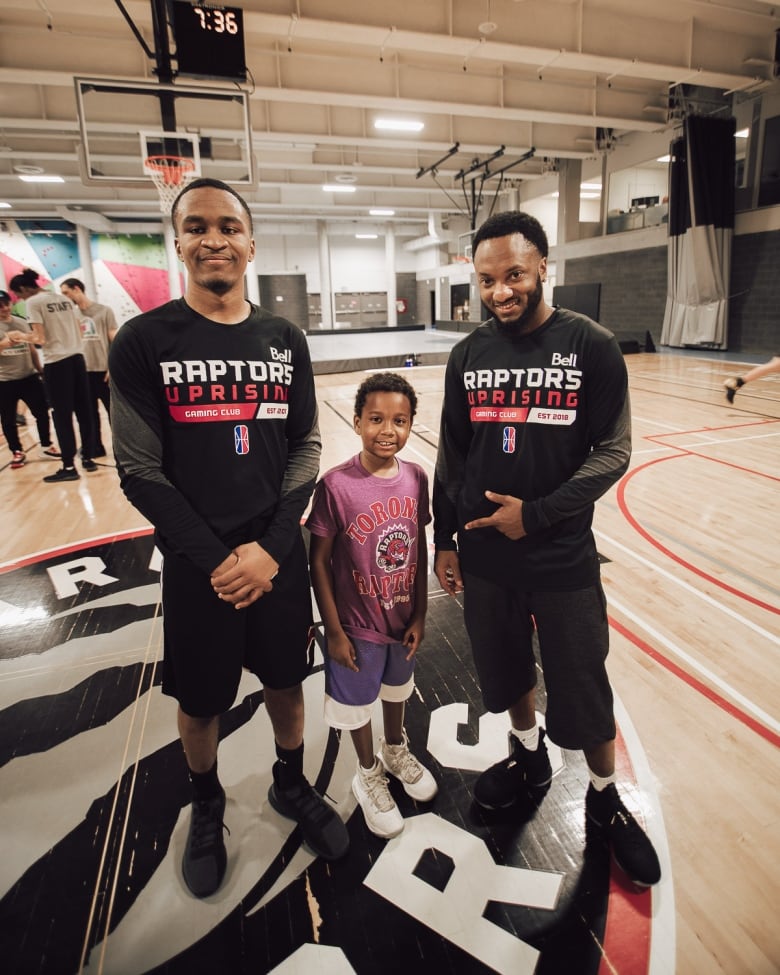 Joshua McKenna and Kenneth Hailey take a break from training to pose for a photograph with a young fan. (Submitted by Raptors Uprising)

"He lived right across the street so we used to go to his grandma's house and play. I kept playing and eventually when I got to college . . . I got myself into the top ranking of players. So, we just kept working hard and here we are," he told CBC Toronto.

At 29, Hailey is the oldest member of the team. Like his teammates, he started playing 2K video games at a young age.

"I grew up in a household where it was eight of us and we all used to play video games," he explained.

"I used to want to be the best in the house so as we kept playing, I got better . . . then I got introduced online and I started playing more competitively."

For Knapp, playing 2K video games was just a hobby. That's until late 2017 when he played in a tournament and won.

"Everyone wanted to win that tournament. That was the main goal," Knapp said.

"After that tournament a lot of people quit the game ... until they announced the 2K League and that's when everyone started to lock in. We were relentless, like, 'We're not stopping until we get in.'"