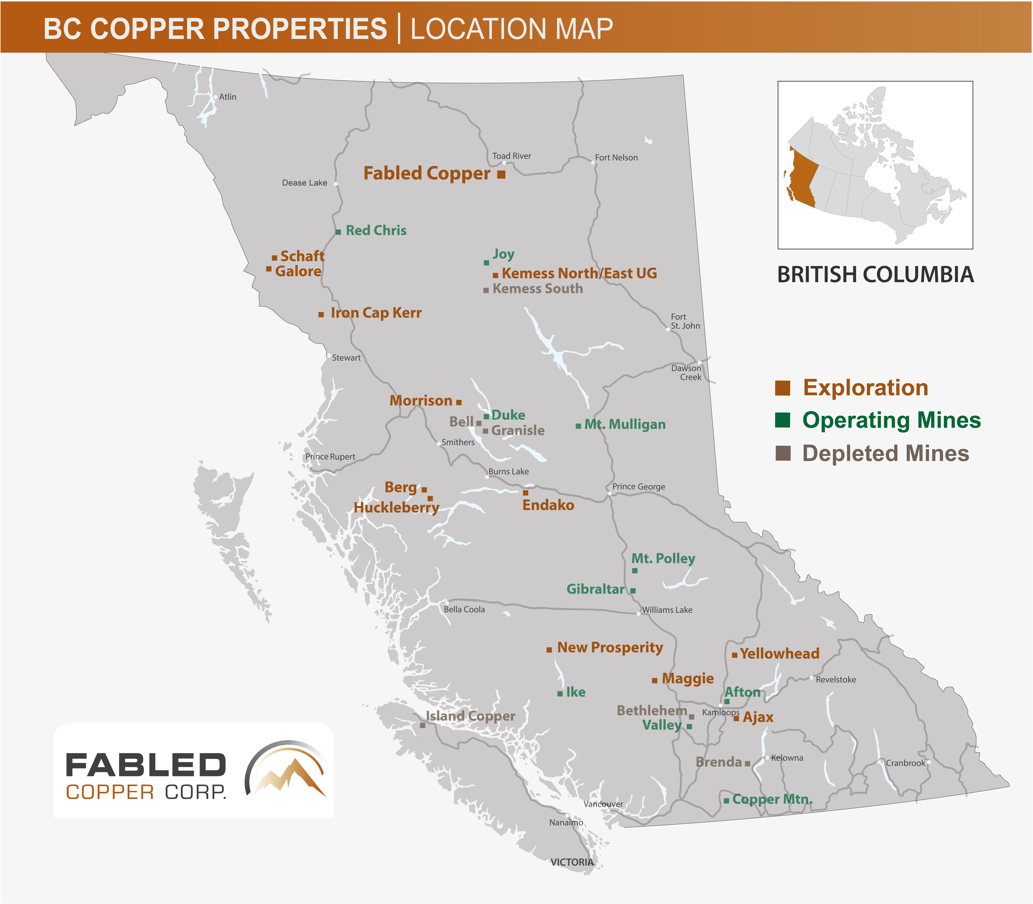 The Muskwa Project is comprised of the Neil Property, the Toro Property and the Bronson Property located in northern British Columbia. See Figure 2 below. 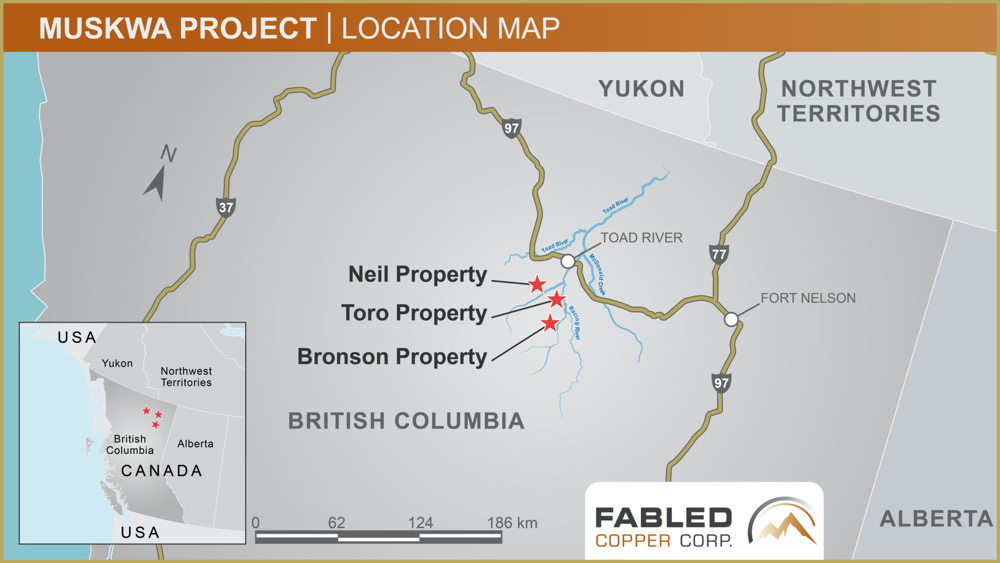 Peter Hawley, President, CEO reports; " To date we have reported on the geology and sampling on the numerous copper occurrences on the Neil and Bronson Properties in addition to the geophysical and UAV Drone missions. We now would like to report on our findings on the Toro Property conducted during the 2021 summer field season. See Figure 3 below 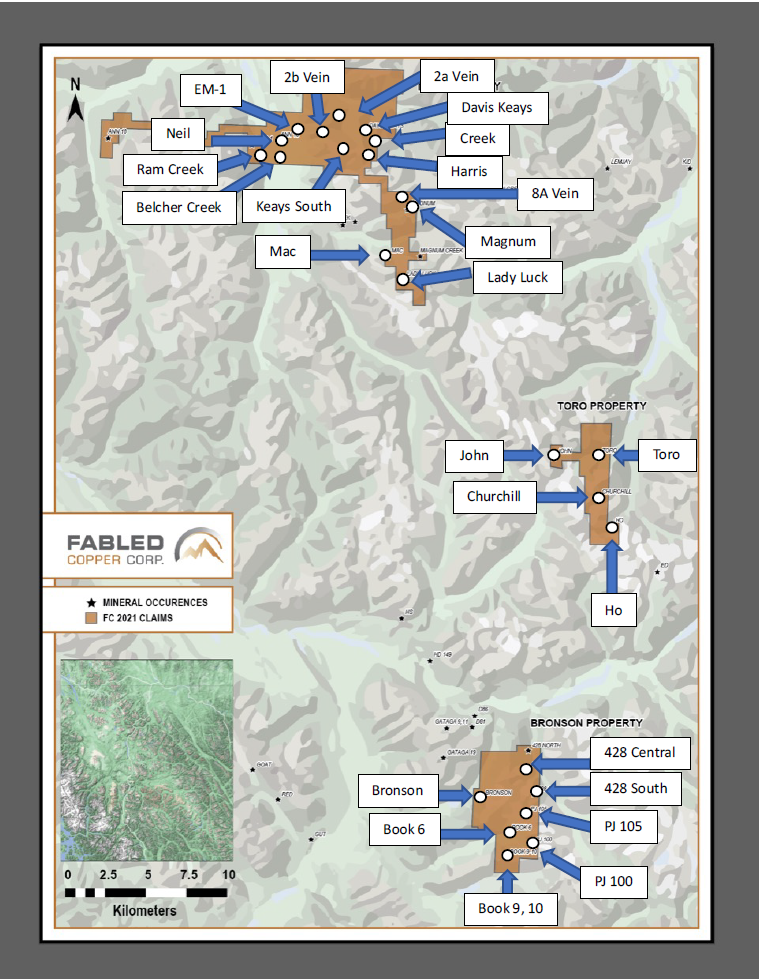 The Toro property is underlain by interbedded dolostone and slatey argillites of the Proterozoic Aida Formation and red-weather siliciclastic sandstones and conglomerates of the unconformably overlying Cambrian Sylvia Formation. East of the main Toro mineral occurrences clastic sedimentary rocks of the Tuchodi Formation occur. Cambrian stratigraphy occurs predominantly within the western half of the property and Proterozoic stratigraphy in the east.

The Proterozoic sedimentary rocks are cut by several large, NNE-trending diabase dikes which, in the western area of the showings, are truncated and unconformably overlain by varicolored clastic Cambrian strata of the Sylvia Formation (Preto, 1971). Taylor et al (1973) interpreted a major northwest- trending southwest-dipping thrust fault to be located approximately one kilometer northeast of the property.

Copper mineralization occurring in the quartz-carbonate veins appears to be highly variable and discontinuous. Preto (1971) suggested that the better mineralized veins are older than the dikes, occurring either as inclusions inside dikes or as panels along or near the sides of dikes. See Photo 1 below.

The Toro claims encompass four mineral occurrences summarized below with information from the B.C. Minfile. The main showings outcrop on top of a 2,438 meter high north-south trending ridge. The remnants of an old helicopter pad on the ridge top and other old workings are still visible. See Figure 4 below. 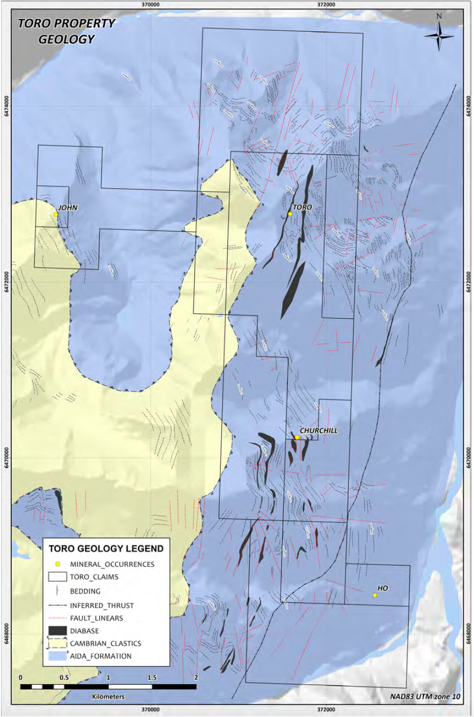 The Ho and John Occurrences and Target 11 Anomaly on the Toro Property were prospected over 5 days and thirteen samples of float were collected and assay results are presented in Table 1and copper assay values are displayed on Figure 5 below. 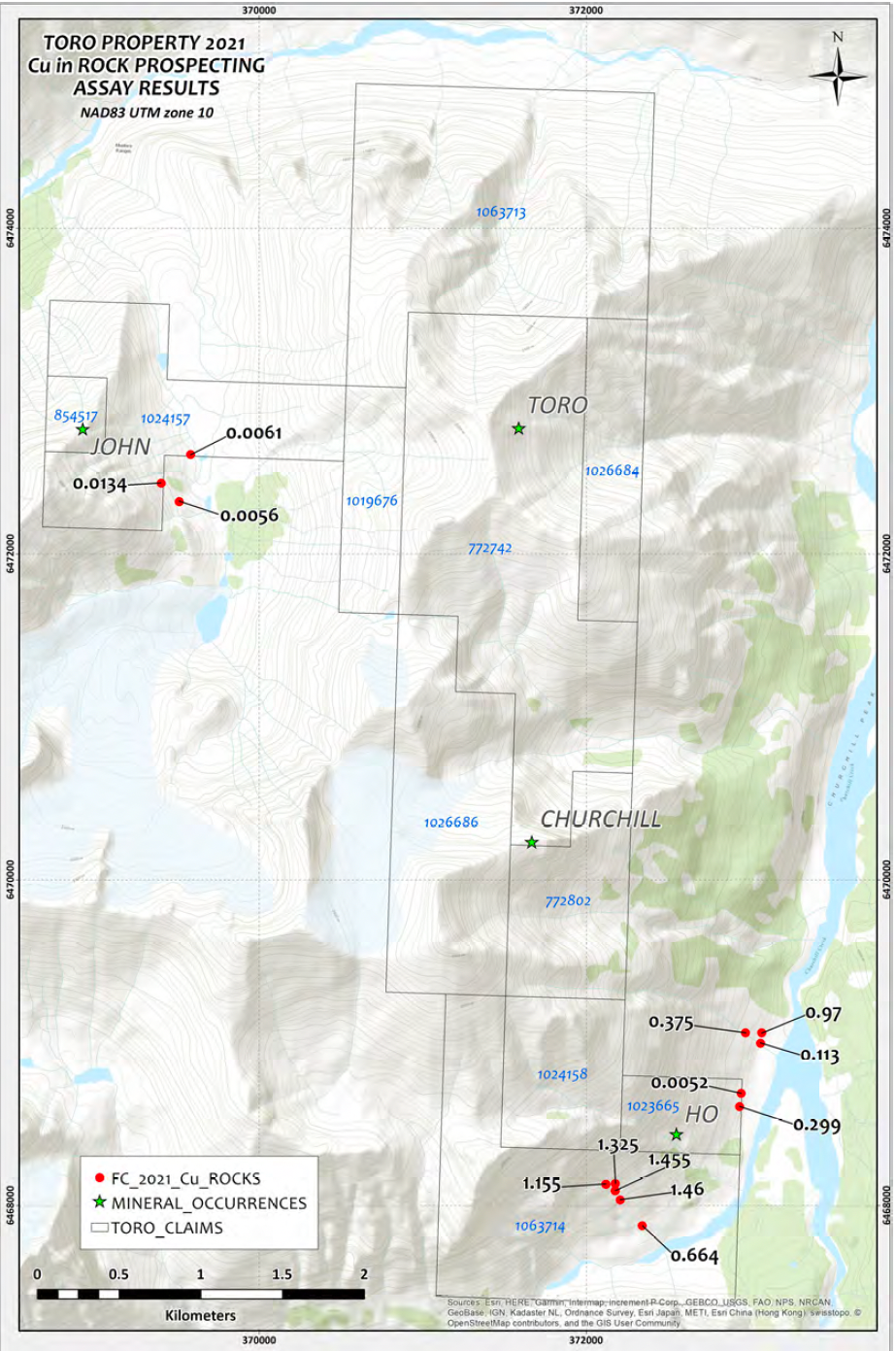 A prospecting traverse was started on the west branch of the Churchill Creek and continued up-slope along an old dozer switchback trail to within 65 meters, at a slope of 37 degrees, of the Ho Vein. The vein is exposed on a northeast trending rock face at an altitude of ~ 1,400 meters. Five examples of quartz-carbonate float (D-723211 to D-723214), with copper mineralization and shale-siltstone fragments, were sampled at elevations of 1,166 to 1,365 meters. See Photo 2, Table 1 below. 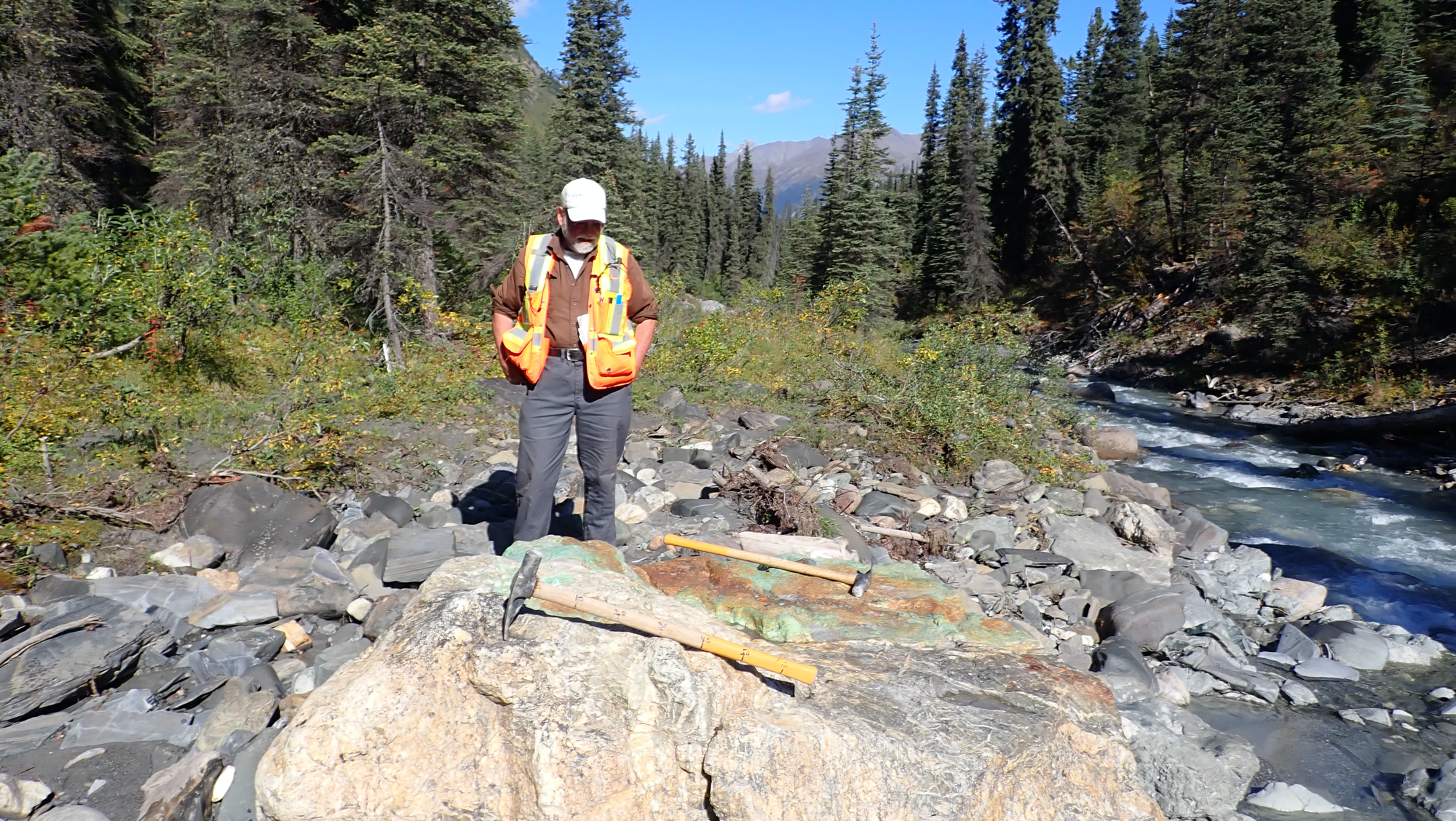 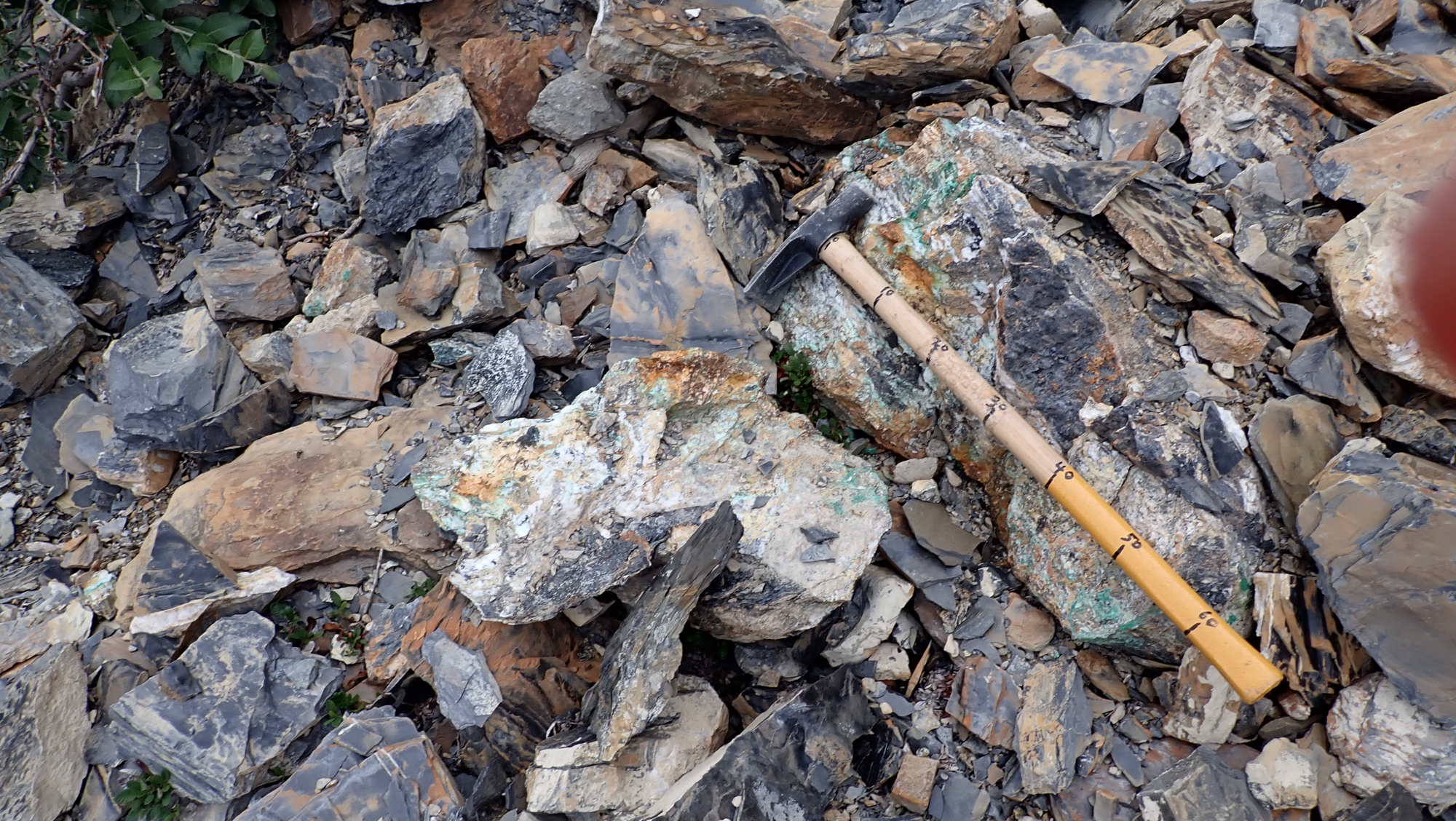 The highest copper content (0.97 %) was found in sampleD-723518 which was comprised of weathered wacke with quartz-sulphide (1 % chalcopyrite and trace azurite and bornite), See Photo 4, Table 1 below. 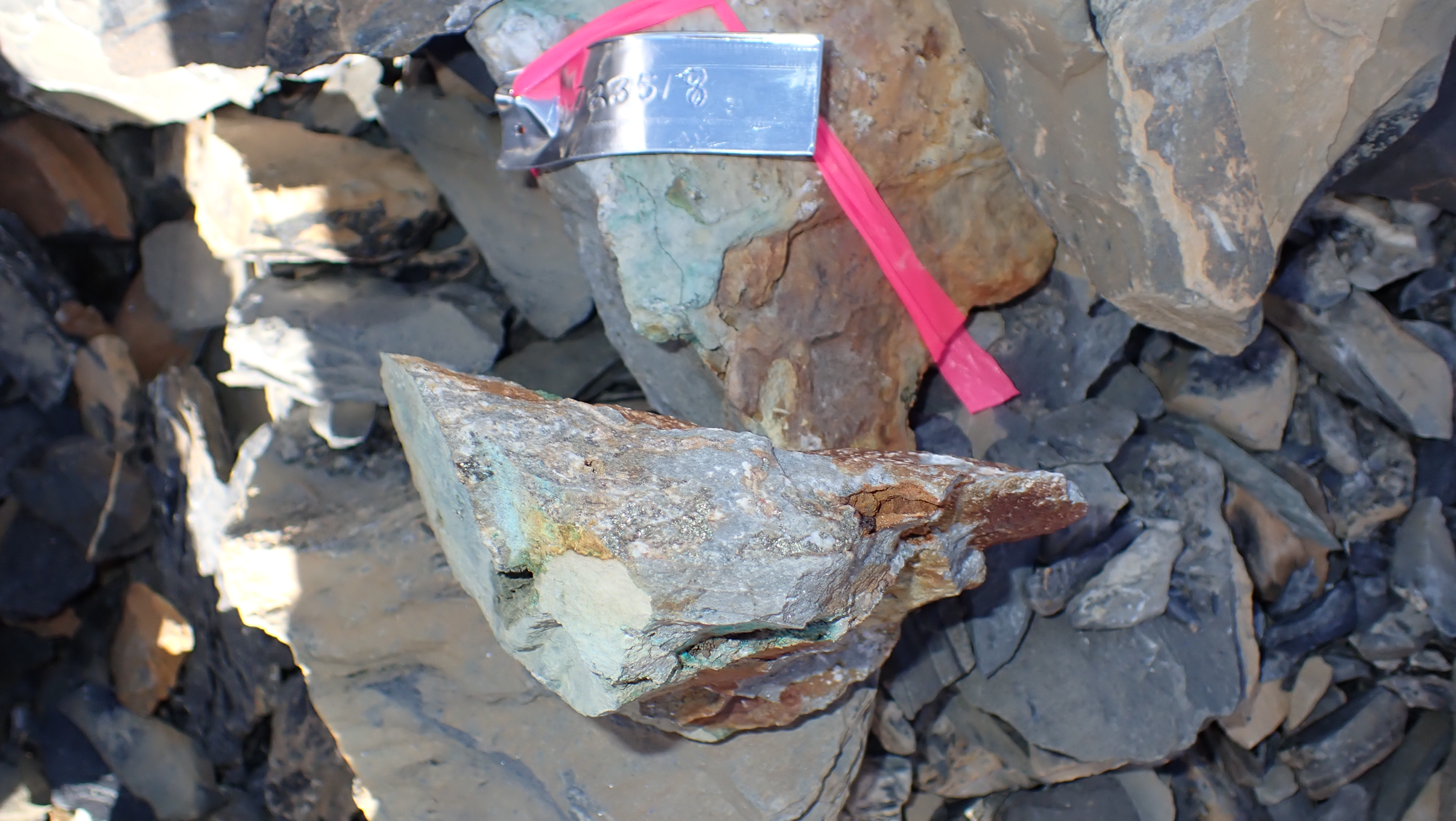 While prospecting the anomalies of Target 11 an exposed quartz vein was seen upslope to the west and the helicopter placed the crew upslope and 2 quartz veins, striking ~ 355 degrees at an altitude of 1767 meters, were observed across an east trending ravine to the north. These veins lie 1.10 kilometers north along strike of the Ho Vein exposure.

The John Occurrence wasn't found or seen in outcrop while prospecting a valley and a valley-old switchback dozer trail, east and northwest, respectively, of the supposed location of the occurrence.

The locations of the Toro and Churchill Occurrences were overflown and the Toro veins and some old workings were observed from the air, but rough terrain and lack of climbing aids prevented prospecting in the area. The plotted location of the Churchill Occurrence was also overflown but no veining or Cu alteration was observed.

In summary, a total of 13 samples were collected across the Toro property in 2021 with grades ranging from sub anomalous to 1.46% copper. Cobalt values were significantly anomalous at the Ho occurrence.

Anomalous barite was characteristic of samples collected at the John occurrence. Manganese is also anomalous in samples from both the John and Ho occurrence.

All samples taken were photographic and a GPS location taken, plus a metal sample tag left in place for future reference if required. All this data plus the assay results were geotagged and placed in a .kml /.kmz file for use such as google earth for easy reference. See Photo 5 below. 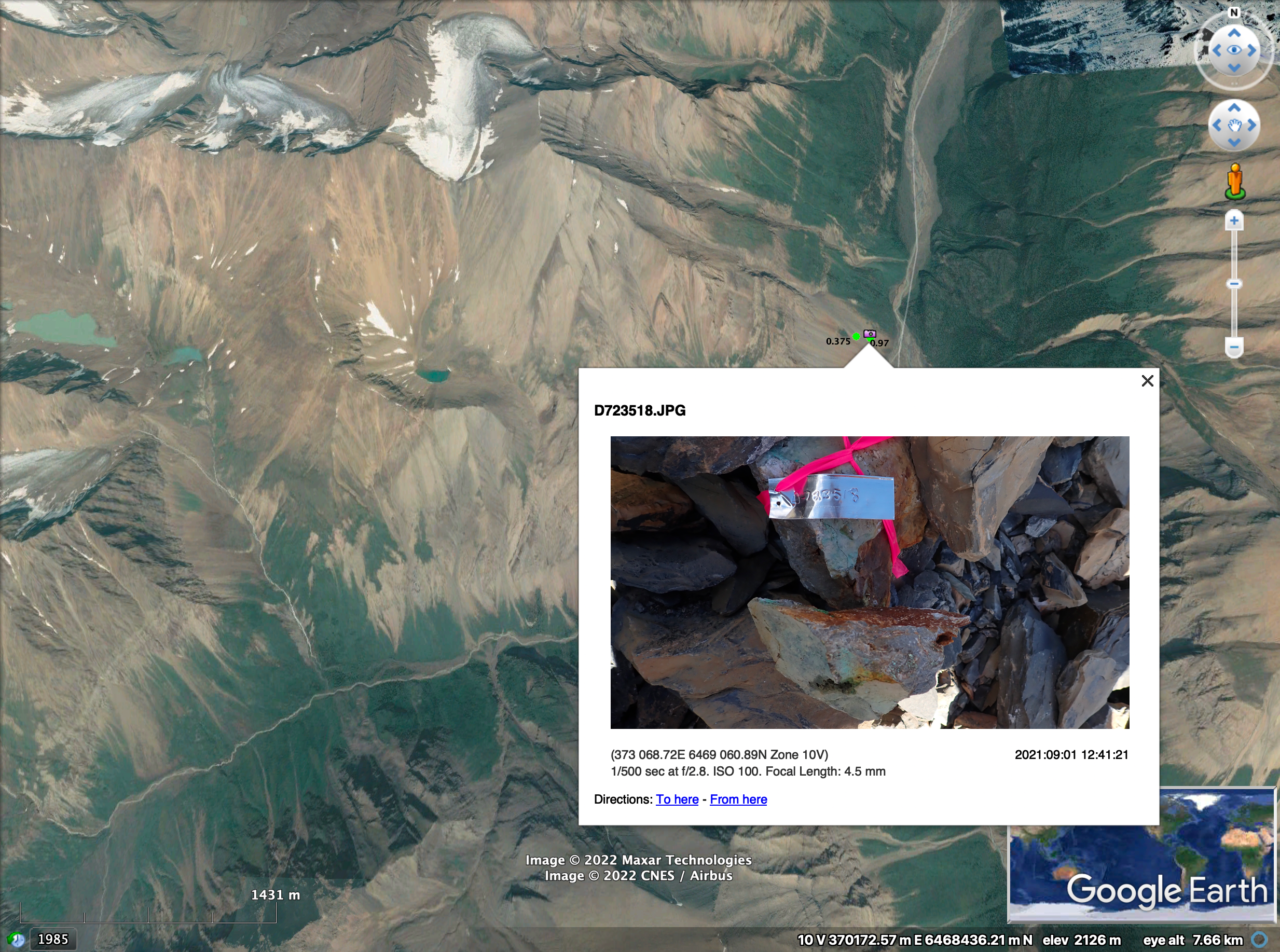 A spatial correlation exists between this vein-hosted mineralization and the presence of Neoproterozoic diabase units. No data currently exists demonstrating a temporal relationship, however given the spatial coincidence of the two features and exploitation of similar structures, it is plausible they are genetically related and this will be examined during the 2022 field season.