posted on Mar 09, 2022 10:20AM
Log in to use the IP Check tool [?]
Fabled Silver Gold Corp. ("Fabled" or the "Company") (TSXV:FCO); (OTCQB:FBSGF), and (FSE:7NQ) reports that it has completed the planning for a Phase 2 definition diamond drill program on the Santa Maria Property in Parral, Mexico. An accompanying Phase 2 exploration drill program is still in the planning stage.

Peter Hawley, President, CEO reports; "The past year of exploration diamond drilling, underground diamond drilling, definition diamond drilling, and finally surface mapping and sampling, has been not only aggressive, but has resulted in over 6,900 samples collected and analyzed. This massive input of data has led our stream lined analytical team to new important understandings of the structural and mineralization controls on the western sector of the property where approximately 80% of our efforts over the past year were focused.

I would like to extend our thanks to our Project Manager Joaquin Rodriguez and senior geologist Edgar Rojas for their contribution to these important steps forward."

When the Company embarked on this project we were of the opinion this was a low sulfidation epithermal system deposit and contained two veins of interest. The Santa Maria and Santa Maria Dos veins. See Figure 1 below.

Following the completion of the Phase 1 drilling we have now had time to "stop chasing the bit" and have compiled the total data collected. Through analysis of this many things have become clear.

We now know, as we suspected from the outset, that the Santa Maria vein and Santa Maria dos vein are actually the footwall and the hanging wall of a structure. What we did not know was there is a mineralized hydrothermal diorite dike following the structure, with hydrothermal breccias on both sides of the dike. See Figure 2 below 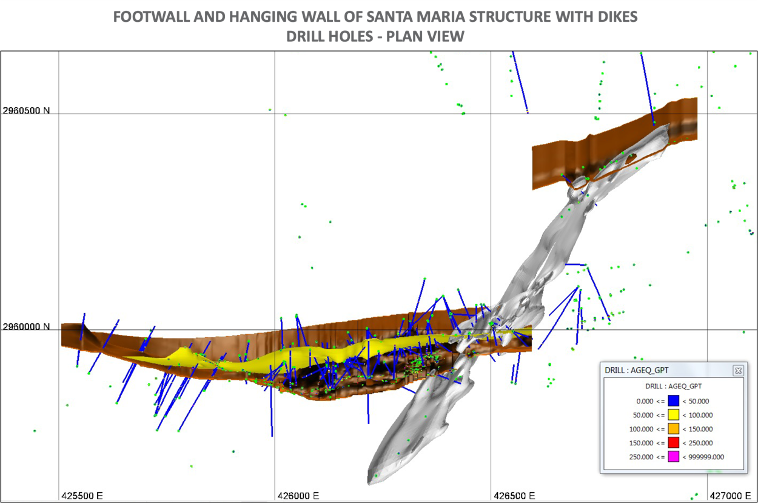 These breccias were previously thought to be the Santa Maria vein. Furthermore, there are different generations of structural / mineralization controls. In addition, some of the 2021 exploration drilling intercepted some of the secondary mineralized dike structures and the Santa Maria off-set to the northeast which remains open in all directions.

To that end the Company has designed a two-prong attack to aggressively advance the Santa Maria project. The first is a second phase 100% dedicated definition diamond drill program from surface for a minimum of 5,000 meters using one dedicated drill to perform this task.

This program has already been designed with surface drill collars and underground pierce points into the mineralized Santa Maria structure chosen. See Figure 3 below. 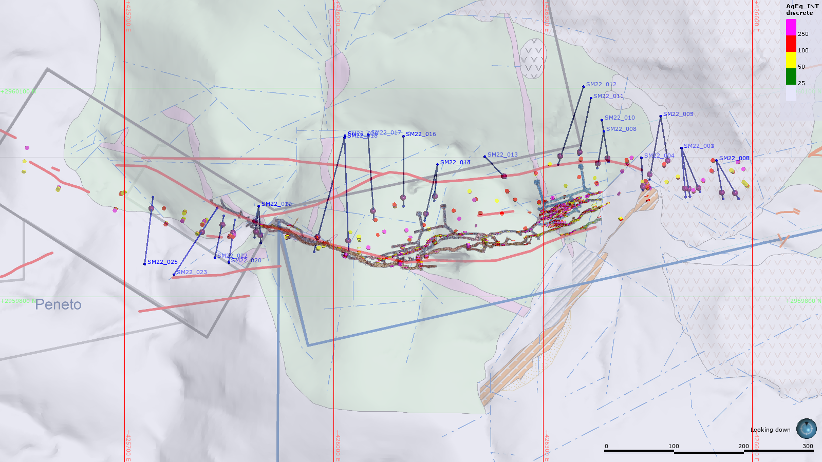 These definition drill targets were chosen based on the modelling of the first and secondary structures and mineralization, and their relationship to the 2021 high grade gold intercepts found to the west and the east. We now know that these two areas are dilation zones as a result of the intercept of 2 structures. The down plunge of these zones remain open in all directions. See Figure 4 below. 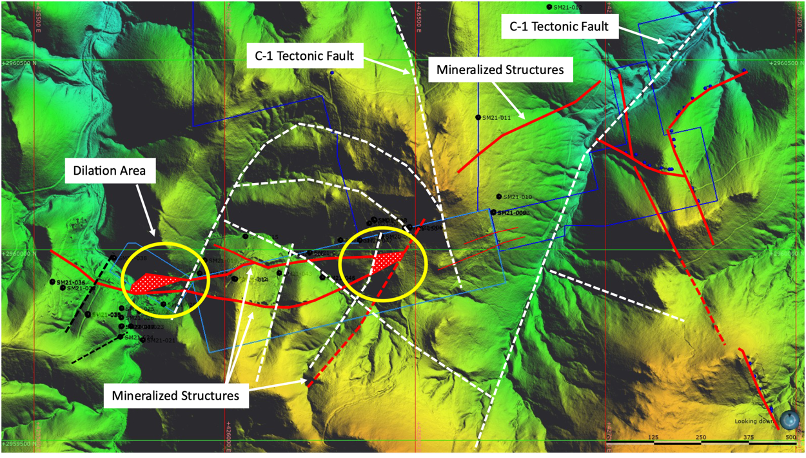 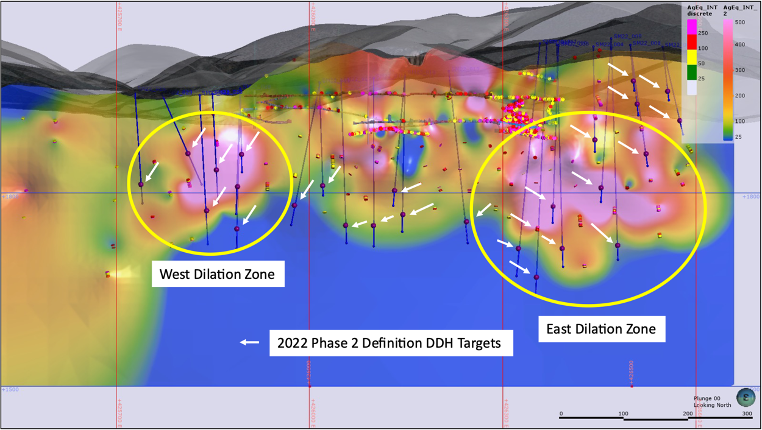 Using the valuable 2021 drilling information, we will apply the new structural interpretation and the Santa Maria signature and controls to the rest of the property, paying particular attention to the mineralized structure. See Figure 4 above.

Detailed field mapping and structural analyses led by our senior team including our Project Manager has resulted in the below, property wide interpretation in preparation for Phase 2 exploration drill targets.

Of particular interest are the areas for possible structural dilation zones. See the yellow circles in Figure 6 below.

Once the field work and observations have been completed the Phase 2 exploration first priority drill targets will be defined in the coming weeks.

The Company has entered into an agreement with Golden Minerals Company (NYSE American and TSX: AUMN) to acquire the Santa Maria Property, a high-grade silver-gold property situated in the center of the Mexican epithermal silver-gold belt. The belt has been recognized as a significant metallogenic province, which has reportedly produced more silver than any other equivalent area in the world.