Falcon is a global energy company with projects in Hungary, Australia & South Africa

solyomtwo
Rank: President [?]
Points: 58940 [?]
Votes: 70 Score: 4.0 [?]
Your Vote:
Please Log In to Vote
Follow
Did you know? You can earn activity points by filling your profile with information about yourself (what city you live in, your favorite team, blogs etc.)

A further $150 million fronted up by Origin to finish all stages of drilling in the Beetaloo in earnest.

Looking for more stock ideas like this one? Get them exclusively at Elevation Code. Get started today »

We have been long Falcon Oil & Gas (OTCPK:FOLGF) pretty much since the inception of our portfolio. It has been a roller coast ride to say the least. Although Falcon has sizable assets in three different countries, the focus over the past five to six years or so has been very much in its Beetaloo Basin asset in the Northern Territory of Australia.

Falcon and its partners started to gain significant momentum in this project when a discovery of a significant material share gas resource was announced in late 2016. To get this discovery so early in the project was a huge plus for a number of reasons. Firstly, Falcon was being fully carried for multiple wells after this discovery, and secondly, the gas discovery was significant to the tune of 6.6 Trillion Cubic Feet of contingent gas equivalent. Irrespective of what happens in upcoming exploration, this is our prime reason why we believe Falcon remains a strong buy at its current share price. 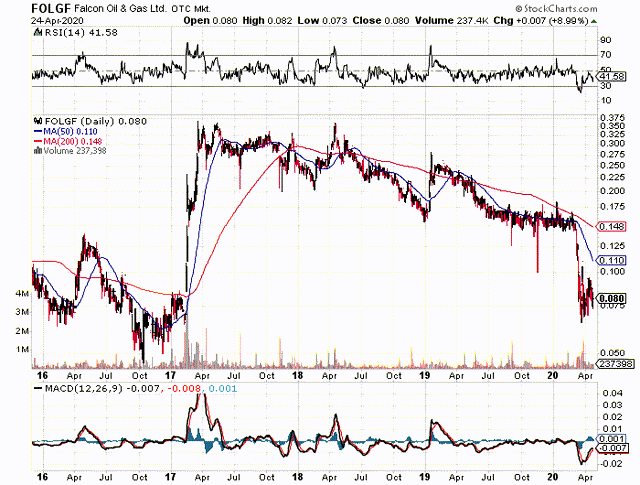 Up to now, Falcon owned 30% of the project and Origin Energy (OTCPK:OGFGF) (ORG.AX) who bought out initial exploring partner Sasol (NYSE:SSL) owned 70% of the project. This percentage breakdown changed in recent weeks, with Origin putting up significantly more capital in order to increase its share of the project. From Falcon's point of view, although losing 7.5% share ownership of the asset, the extra $150 million from Origin ensures that the project will be fully funded until completion. This is important, given the sheer size of the asset at hand and the yet unexplored potential on offer.

The sub-basin is over 4.6 million acres, so there is still a vast amount of untapped potential the joint venture will want to tap. The near-term plan (Stage 2) is to drill horizontal wells in the Kyalla shale (already done) as well as the Velkerri shale. The Kyalla shale play now needs to be fracked, which is the next phase of this operation. Remember, the key here, from Falcon's point of view, is to gather as much information as possible before operations head into the final stage. The decision then in stage three will be to drill horizontal wells into the most attract plays which have been drilled to date. This gives the joint venture the best chance of realizing a highly attractive commercial asset. Remember, the joint venture has already had huge success with the Amungee discovery, but it wants to see if it can find a more attractive commercial play in subsequent drilling.

From a fundamental viewpoint, natural gas is going to be the bridge fuel between fossil fuels and renewables for quite some time to come. We can see this in the trends which demonstrate that natural gas consumption has been increasing year on year for quite some time now. Furthermore, look at the location of this asset. Australia has a huge energy supply shortage coming which definitely acted as a tailwind when deciding whether the Northern Territory fracking moratorium was going to be lifted. Although new laws and regulations came into force, the moratorium was finally lifted in April of 2018.

Due to the coronavirus pandemic and the collapse of crude oil prices, Falcon shares were delivered a "One-Two Punch" which collapsed the share price to $0.07 per share in recent weeks. Although many equity markets have somewhat recovered over the past month, the price of crude oil, for example, is a mere $10 a barrel at the time of writing.

Being a micro-cap stock, there are risks which investors should be aware of. The first risk with these companies is a lack of funding which many times mean the micro-cap can run out of time. As we have mentioned above though, Origin's recent $150 million investment puts this risk to bed which is a big positive. In fact, the more pertinent question here is why Origin (in a time of major upheaval in energy markets) has decided to front up that extra cash.

Furthermore, due to the low volume in this stock, we do not advise short-term trading in here. The play here is to buy shares at close to the current market price as possible and hold until stage 3 comes to completion. In the recent farm-out to Origin, there was no share dilution, which makes a buy and hold investment perfectly feasible at this moment in time.

We have consistently stated that position sizing is the best way to control risk on any given trade or investment. Yes, investors will bemoan the fact that there is no paying dividend with Falcon and no in-depth financial reporting. This, though, is what you get with micro-caps. In fact, many times, the more detailed information one has at his or her disposal on a firm at any given time, the more accurately the market prices the company. This means limited upside compared to the micro-cap which the market believes has too many "unknowns" to accurately put a valuation on.

Therefore, to sum up, Falcon Oil & Gas is presently trading at $0.08 per share. What investors need to ask themselves here is whether they really believe the company is worth half of what it was just 7 short weeks ago. Yes, Falcon is a penny stock, and risk is always high when dealing with unconventional assets. However, given the price of the stock and the potential of the project, we maintain that the risk/reward play remains compelling. In our trading and investing exploits, our objective is to put us in scenarios where we have limited downside but significant upside. Remaining long.

Elevation Code's blueprint is simple. To relentlessly be on the hunt for attractive setups through value plays, swing plays or volatility plays. Trading a wide range of strategies gives us massive diversification, which is key. We started with $100k. The portfolio will not stop until it reaches $1 million.

Disclosure: I am/we are long FOLGF. I wrote this article myself, and it expresses my own opinions. I am not receiving compensation for it (other than from Seeking Alpha). I have no business relationship with any company whose stock is mentioned in this article.

Loading...
Loading...
Reply New Message
Prev Message Back To Forum Threaded View Next Message
Share
Share
Share
Share
New Message
Please login to post a reply
Search this hub
President's D.D.
Falcon Update
As you can see, the Chevron/Beach Energy deal valued at $844 / acre. The Falcon/Origin/Sasol deal is in the same category. I added the Falcon deal to the chart. By the way Falcon should do so in th...
read more

solyomtwo
Forgot your username or password? Recover it here
Not a member yet? Register
Didn't receive confirmation instructions? Resend