Falcon is a global energy company with projects in Hungary, Australia & South Africa

solyomtwo
Rank: President [?]
Points: 64071 [?]
Votes: 70 Score: 4.0 [?]
Your Vote:
Please Log In to Vote
Follow
Did you know? You can earn activity points by filling your profile with information about yourself (what city you live in, your favorite team, blogs etc.)

NOT FOR DISSEMINATION IN THE UNITED STATES OR THROUGH U.S. NEWSWIRE SERVICES

31 March 2022 - Falcon Oil & Gas Ltd. (TSXV: FO, AIM: FOG) is pleased to announce that it has received a subscription from Sheffield Holdings LP ("Sheffield") for a US$10 million private placement through the issue of 62,500,000 Common Shares ("the Placing Shares") at a price of CAD$0.20 per share ("the Placing"). Following the placement Sheffield will hold a total of 90,443,607 Common Shares of Falcon, representing 8.66% of Falcon's issued and outstanding Common Shares.

Falcon Oil & Gas Australia Limited ("Falcon Australia") has also agreed to grant Sheffield a 2% overriding royalty interest ("ORRI") over Falcon Australia's 22.5% working interest in the Beetaloo Sub-Basin exploration permits in return for a cash payment of US$6 million. The 2% ORRI is being granted to Sheffield calculated on equal economic terms as the existing 3% ORRI with the TOG Group. The cash proceeds of US$6 million will be used to exercise Falcon Australia's call option to reduce the existing ORRI with the TOG group from 3% to 1%, which is expected to take place before 30 April 2022. The assets subject to the ORRI are not currently revenue generating and there are no profits or losses attributable to them. These changes to the ORRI's, will be submitted to the Northern Territory Government, Australia for registration.

Details of the PlacingThe completion of the Placing is subject to approval of the TSX Venture Exchange. A further update on Admission will be provided in due course. The Placing Shares will not trade on the TSX Venture Exchange Market until the date that is four months and a day after the day of issuance. The Company's total issued share capital following Admission will be 1,044,347,425 Common Shares. The information contained within this Announcement is deemed by the Company to constitute inside information as stipulated under the Market Abuse Regulations (EU) No. 596/2014. Upon the publication of this Announcement this inside information is now considered to be within the public domain.

The securities being offered have not been, nor will they be, registered under the United States Securities Act of 1933, as amended, and may not be offered or sold in the United State or to, of for the account or benefit of, U.S. persons absent registrations or an applicable exemption from the registration requirements. This press release shall not constitute an offer to sell or the solicitation of an offer to buy nor shall there be any sale of the securities in which such offer, solicitation or sale would be unlawful.

Use of FundsThe Placing will add US$10 million to the Company's cash balance of US$8.4 million as at 28 February 2022, which leaves Falcon in a strong financial position well ahead of future decisions on the Beetaloo project.

Philip O'Quigley (CEO of Falcon) commented:"Falcon is very pleased that Bryan Sheffield of Sheffield Holdings LP has increased his strategic stake in the Company at this time. Bryan is a highly successful investor and has made significant returns in the US unconventional energy sector in the past. He was Founder of Parsley Energy Inc. ("PE"), an independent unconventional oil and gas producer in the Permian Basin, Texas and previously served as its Chairman and CEO.

PE was acquired for over US$7 billion by Pioneer Natural Resources Company ("Pioneer"), itself a leading independent oil and gas company and with the PE acquisition became a Permian pure play company. Pioneer has a current market capitalisation of c. US$60 billion."

Bryan Sheffield of Sheffield Holdings LP commented:''Falcon and its partner have the largest acreage (4.6 million acres) position centred over the Beetaloo Sub-Basin. The Beetaloo is emerging as a world class shale gas basin with stacked pay potential from several shale intervals. Flow tests from the B Shale of the Amungee Member have confirmed a productive dry gas system in place. Geologic and engineering data from test wells across the Sub- basin have similar properties to some of the highly successful shale gas plays in the United States. The Beetaloo Sub-Basin is still in the exploration and appraisal phase, but with continued good well results, Falcon is well positioned to become a key supplier of low carbon energy to Australia and to the world within a few short years. I am delighted to have this opportunity to acquire a significant interest in Falcon and gain exposure to their net 1 million acres in what may become one of the biggest shale plays in the world.''

2022 will see Falcon and Origin progressing to the Stage 3 work programme of the restated Farm-Out Agreement. , which will include the drilling, fracture stimulation and extended production test of two horizontal wells.

Philip O'Quigley (CEO of Falcon) commented: "This is an extremely important period for the Beetaloo Sub-Basin and we are delighted to have confirmed a high-impact, extensive and really exciting work programme for the joint venture.

We will be focusing our attention on the Amungee Member B Shale, following the 2021 results at Amungee NW-1H, which suggested a normalised gas flow rate equivalent to around 5,000 Mscf/d per 1,000m of horizontal section; a potentially commercial flow rate. Falcon remains largely (circa 75%) carried for 2022, with the balance of costs being funded from existing resources. Positive results here will provide a further line of sight to the commercialisation of the Beetaloo and could lead to a pilot development program in 2023. Confirmation on the commencement on the Stage 3 work programme will be provided in the coming months as scheduling is refined.

In addition to our own acreage, we also look forward to the gas flow results from the current testing of two wells in the neighbouring Santos-operated EP 161, also targeting the Amungee Member dry gas play. We expect these results to be communicated to the market shortly and believe that these will prove to be another important moment for the nationally significant Beetaloo Sub-Basin."

On Oct. 15, 2021, the company announced that drilling of the Velkerri 76 well had been completed and preliminary evaluation of the results had been very encouraging.

The preliminary petrophysical interpretation of the Velkerri-76 wireline logs has now been carried out, which has confirmed positive indications in particular from the B shale of the Amungee member (formerly known as the Middle Velkerri). Other intervals within the Amungee member also show positive indications and further analysis will now be undertaken to confirm these results.

The Amungee member B shale was the principal area of focus with Falcon's operations at Amungee NW-1H and the results obtained to date compare very favourably with some of the most commercially successful shale plays in North America. The Amungee Member B shale is also the focus of activities in the neighbouring Santos and Empire Resources operated blocks.

Key information with respect to the preliminary petrophysics and mud gas composition of the Amungee member B shale are included in the attached table.

Additional analysis of the conventional core acquired during the drilling of Velkerri 76 will be required to confirm the preliminary petrophysics interpretation and will take place over the coming months.

Laboratory analysis of gas samples collected during drilling will be carried out to further refine gas composition data within the Amungee member shale intervals.

Philip O'Quigley, chief executive officer of Falcon, commented: "The preliminary petrophysical interpretation of the Velkerri 76 wireline logs is excellent news with the Middle Velkerri B shale comparing favourably to some of the most commercially successful shale plays in North America. These results are further evidence of the increasing significance of the Velkerri play, with results still to come from flow testing of two horizontal wells at the neighbouring Santos-operated blocks also targeting the Velkerri play."

I could have predicted in advence the arrival of Boo-birds also known as the Backroomroom Boy's minions. They will try to convince you that the precious stone in your hand is nothing but a piece of black coal.

Falcon Oil & Gas Ltd. has provided results of the production log test at the Amungee NW-1H well. The results suggest a normalized gas flow rate equivalent of between 5.2 million to 5.8 million standard cubic feet per day per 1,000 metres of horizontal section.

Amungee is located in the Beetaloo subbasin, Northern Territory, Australia, and the testing conducted is part of the 2021 work program, which is operated by Falcon's joint venture partner, Origin Energy B2 Pty. Ltd., a wholly owned subsidiary of Origin Energy Ltd.

Philip O'Quigley, chief executive officer of Falcon, commented: "With our unique and extensive position in the Beetaloo subbasin, this is really exciting news for Falcon shareholders and this significant development provides line of sight to the commercialization of the Beetaloo, for which we remain carried for further activity.

"A recent report by an industry analyst suggests that gas flows greater than three mmscf/d from a 1,000 m horizontal well are required to demonstrate the commerciality of the Beetaloo. Not only does this test result significantly exceed these parameters and significantly increase our assessment of the Velkerri dry gas play, but it also puts the Beetaloo on a par with other shale gas basins in North America.

"While we wait for further news from our operations at Kyalla 117 N2-1H ST2 and Velkerri 76 S2-1, we look forward to working with our JV partner, Origin, in establishing the next phase of work on the Middle Velkerri B shale.

"With other drilling activity in neighbouring Santos-operated blocks targeting the Velkerri dry gas play, this is an important moment for the nationally significant Beetaloo subbasin."

Do not sell any of your Falcon shares under $10.00

For blind minions…..see link below

Apparently the manipulators are back. Many thanks to the BackroomBoys to prove just how badly they yearn to possess your Falcon shares. 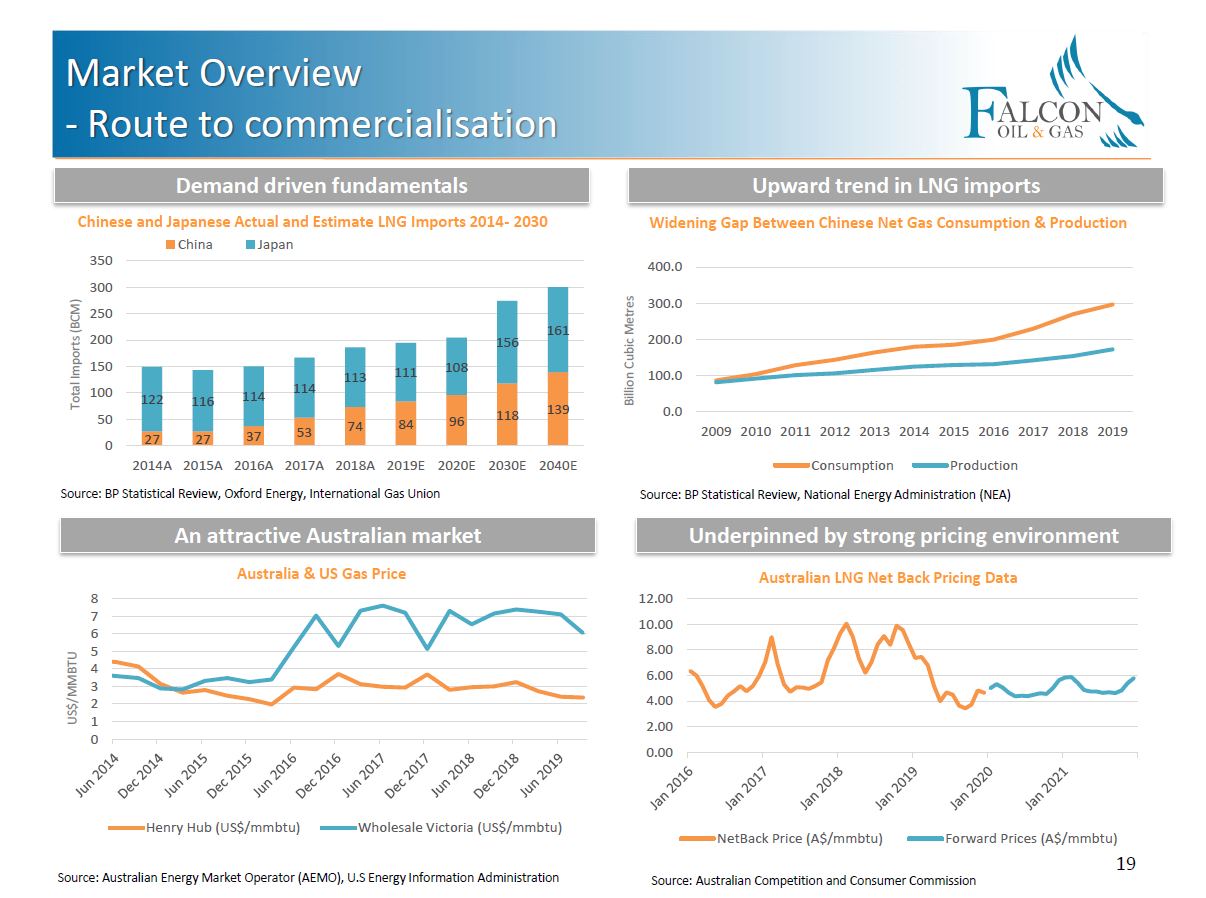 Loading...
Loading...
Reply New Message
Prev Message Back To Forum Threaded View Next Message
Share
Share
Share
Share
New Message
Please login to post a reply
Search this hub
President's D.D.
Falcon Update
As you can see, the Chevron/Beach Energy deal valued at $844 / acre. The Falcon/Origin/Sasol deal is in the same category. I added the Falcon deal to the chart. By the way Falcon should do so in th...
read more

solyomtwo
Forgot your username or password? Recover it here
Not a member yet? Register
Didn't receive confirmation instructions? Resend