Welcome To The Grande Cache Coal Corporation HUB On AGORACOM

msgr77
Rank: President [?]
Points: 3821 [?]
Votes: 36 Score: 4.1 [?]
Your Vote:
Please Log In to Vote
Follow
Did you know? You can earn activity points by filling your profile with information about yourself (what city you live in, your favorite team, blogs etc.)

Looks like Chinese steelmakers are currently lacking leverage when it comes to negotiating prices for the raw materials that go into the steel making process. Bodes well for metallurgical/coking coal producers like GCE.TO and WTN.TO.

Quietlyaccepting defeat, China's biggest steelmakers have largely given uptrying to wring discounts on iron-ore purchases this year and are nowconcentrating on next year's contract-price talks, said people familiarwith the secretive negotiations.

China, by far the biggest user of imported iron ore, has tried formonths to leverage its size and growing influence to muscle miners Rio Tinto, BHP Billiton Ltd. and Brazil's Vale SA into lowering their prices for iron ore, used as the chief ingredient in the production of steel. 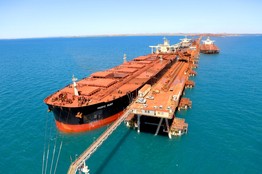 China'sbiggest steelmakers are quitting efforts to pressure iron-ore minersfor new discounts and will focus on 2010 contracts. Ore from a RioTinto mine is loaded this month for export from Cape Lambert, Australia.

Generally iron-ore contract prices run from April to April eachyear. But negotiations, which are often contentious, begin months inadvance in order to fix a deal close to April. The failed efforts bythe Chinese to drive down the cost of producing steel could ultimatelyaffect the prices of steel-intensive products such as refrigerators,equipment and automobiles.

Chinese steelmakers, represented by trade group China Iron and SteelAssociation, said that the group is officially negotiating iron-oreprices, but declined any further comment.

Rio Tinto, the chief negotiator for the miners, said that it isofficially still in negotiations. "We don't comment on iron-ore pricenegotiations," a spokesman said. Brazil's Vale and BHP also have saidthey won't comment. But steelmakers and miners close to thenegotiations have confirmed that both sides are looking to 2010 torevisit the price of iron ore, marking 2009 as a done deal.

Next month, the world's steel companies are meeting in Beijing fortheir annual gathering and are expected to plan an industrywidestrategy for next year's iron-ore negotiations.

Chinese steelmakers and the world's miners have been operating underwhat is essentially a gentlemen's agreement in which both sides haveagreed to settle for a 33% price cut from last year's prices. This isroughly the same price that miners negotiated with Japanese steelmakersearlier this year.

Chinese steelmakers rejected the agreement with the Japanese as notsteep enough, in light of the weak demand and sluggish world economyearlier this year. They wanted a closer to 50% drop in iron-ore prices.

Though China produces more steel than any other country, it doesn'thave enough natural iron ore and needs to import it from Australia,Brazil and India. The mining companies sell the iron ore, and each yearthe two sides hammer out a contract for prices and quantities.

The Chinese tried to act as one voice against the powerful miningindustry but its steelmakers are still essentially an unorganizedgroup. The Chinese Iron and Steel Association stepped up efforts toconsolidate its members, but so far has failed to present a strongenough united front.

Chinese steelmakers were undone these past few months by their ownmembers. Many of China's steelmakers, especially the midsize companies,secretly bought iron ore at lower contract prices and resold that sameiron ore at higher spot market prices. For them, there was a financialincentive to keep spot prices higher.