A surge in ETF inflows (258t) outweighed weakness elsewhere in the market to nudge gold demand 3% higher in Q3. Although central bank buying remained healthy, it was significantly lower than the record levels of Q3 2018. Jewellery demand (-16%) was hampered by the continued strength in the gold price, which hit new multi-year– and, in some cases, record –highs, as well as by consumer concern over the health of the global economy. Similarly, the decline in bar and coin demand (-50%) in Q3 was driven primarily by the gold price: retail investors took the opportunity to lock in profits rather than making fresh purchases. Technology demand for gold fell 4% as economic challenges remained, but the nascent 5G infrastructure helped to slow the decline in the important electronics sector. With mine production virtually unchanged, a price-related 10% jump in gold recycling boosted gold supply 4% to 1,222t. 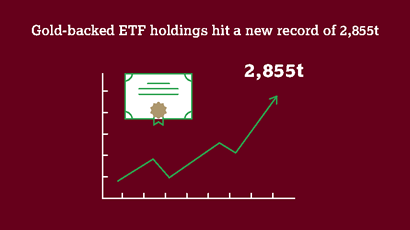 Holdings grew by 258t in Q3, the highest level of quarterly inflows since Q1 2016. Accommodative monetary policies, along with safe-haven and momentum buying, drove demand. 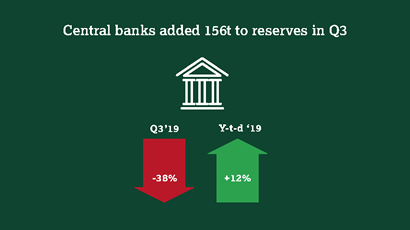 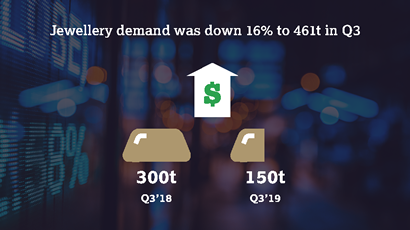 Holdings in gold-backed ETFs hit a new all-time high of 2,855.3t in Q3. Holdings grew by 258.2t during the quarter, the highest level of quarterly inflows since Q1 2016. Accommodative monetary policies, along with safe-haven and momentum buying, drove demand.

Jewellery demand was down 16% to 460.9t in Q3. Weak consumer sentiment due to continued geopolitical and economic uncertainty, coupled with substantially higher gold prices, dented jewellery purchases in all major markets.

Bar and coin investment halved in Q3 to 150.3t. Higher gold prices across many key currencies were the main cause of the decline to a multi-year low, as retail investors across the globe opted to defer purchases and lock in profits.

Gold supply rose 4% in Q3 to 1,222.3t. Growth was driven by a 10% increase in recycling – to its highest level since Q1 2016 – as the ongoing price rally continued to encourage selling back by consumers. Mine production of 877.8t was virtually unchanged y-o-y.

The gold price continued to rally, reaching new multi-year highs. The gold price rose by 5% during Q3, finding sustained support around US$1,500/oz. The primary factors behind this price momentum continued to be ongoing geopolitical tensions, concerns of a slowdown in economic growth, lower interest rates and the level of negative yielding debt.