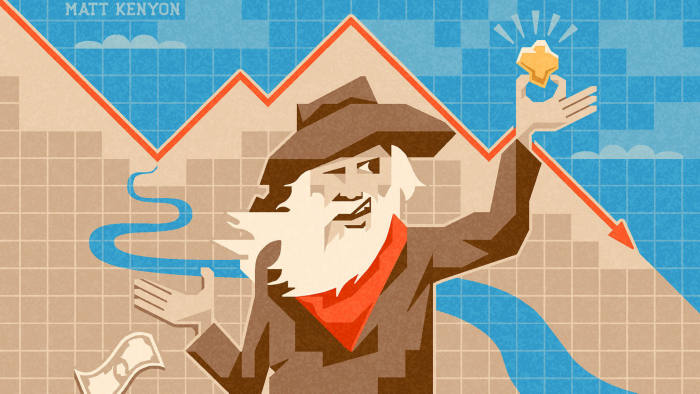 The Dutch Central Bank recently argued in an article that if there were to be a major monetary reset, “gold stock can serve as a basis” to rebuild the global monetary system. “Gold bolsters confidence in the stability of the central bank’s balance sheet and creates a sense of security.”

Talk of gold, however, does not. Investor Ray Dalio recently spooked attendees at the Institute for International Finance conference when he mentioned the possibility of a flight to gold because of his concerns about America’s fiscal position.

That is not a new point. Since at least 2016, financial titans including JPMorgan chief Jamie Dimon and hedge fund manager Stanley Druckenmiller have pointed out that unfunded pension and healthcare entitlements are a looming iceberg for the US economy. Indeed, one theory about the recent crisis in the “repo” overnight lending market is that it was caused by the federal deficit and the increasing unwillingness of investors outside the US to fund it.

But Mr Dalio went further, concluding that the American entitlement crisis meant the US Federal Reserve would have to continue to inflate its own balance sheet indefinitely, and keep rates low (or even negative) well into the future so the US could keep paying its bills.

That would depreciate the US dollar. Taken to its extreme, that never ends well. Prior experiments with rapidly falling currencies include late-third century Rome, Germany’s interwar Weimar Republic and Zimbabwe. At some point, Mr Dalio argued, nobody would want to own US debt or the dollar, and investors would look to other assets for safety. “The question is, what else?” he asked. “That’s the environment I think that we’ll be in. And there’s a saying that gold is the only asset you can have that’s not somebody else’s liability.”

I haven’t bought any gold yet myself, though I did sell out of equities entirely in August. That decision has been somewhat painful given the recent upsurge in the S&P 500, and yet it is one that I do not regret. There is logic in believing — as I do — that US blue-chips and bonds are no longer a safe haven while also believing that prices could stay high for some time to come. After all, holding two seemingly contradictory thoughts in your head at once is the sign of a mature mind. I believe US stock prices are staying up for precisely the same reason that investors might need to be in gold someday.

Analyst Luke Gromen laid out the mathematical logic of this very well in a recent newsletter. He calculates that US annual entitlement payments, which he defines as Medicare, Medicaid and Social Security, plus defence spending plus interest on the federal debt adds up to 112 per cent of US federal tax receipts.

That total has risen from 103 per cent only 15 months ago and 95 per cent two years ago, as government revenue fell due to President Donald Trump’s tax cuts. The proceeds of those cuts helped to further inflate equity prices. The US has become “utterly dependent on asset price inflation for tax receipts”, Mr Gromen writes, adding that the only way the US will be able pay its yearly bills is for asset prices to climb on their own, or for the Fed to “print enough money to make asset prices rise”.

I expect the Fed will, like every central bank before it, do what is politically required. Neither the US nor the world can afford for America to nominally default on its Treasury bills. So, stock prices will rise — for now. The essence of economic policy is, as Joseph Schumpeter reportedly put it, “politics, politics, politics”.

Share price inflation has been under way since the Fed switched gears and began lowering rates in July. It will probably be helped along by the easing of financial regulations enacted after the 2008 crisis, and possibly even a new round of tax cuts before the 2020 elections. Mr Trump measures his own success by that of the market.

But in the longer run, this financially engineered growth must erode confidence in the dollar, particularly at a time when the US and China are going in different directions. China is now the world’s largest natural gas buyer, and is looking to start setting prices for this and other commodities in its own currency. China is also doing more business in euros, as it tries to woo Europe into its own economic orbit. China recently issued its first euro-denominated bonds in 15 years. It is also moving away from buying oil in dollars and strengthening ties with EU companies such as Airbus.

The de-dollarisation of Eurasia would support Mr Dalio’s worldview. So would a shift to a non-dollar reserve asset such as gold. Such a change would force the US to sell dollars in order to settle its balance of payments in the new, neutral reserve asset.

One could argue that even if the US dollar were to weaken and creditors to lose faith in America’s ability to repay its debt, markets might still remain high for a period of time. But we are undergoing a period of deglobalisation. And history shows that when that happens, it eventually tends to trigger asset price collapses in whatever country is associated with the “old order”. No wonder gold bugs abound.