Supportred By Major Shareholders In Alamos and O3 Mining

Supported by 2 majors in Alamos and O3 Mining as shareholders and directors, Manitou has the land, management and partners to make a significant discovery and the relationships in place that can take MTU to the next level.

Manitou is focused on the “Baltimore Deformation Zone” and “Goudreau-Localsh Deformation Zone” for gold discovery which contain the Stover Zone and Patents area in the GLDZ within the overall Goudreau project area.

Prospectivity of the jurisdiction is very high; several companies have committed multi-million dollar exploration budgets to explore the area, making the Michipicoten Greenstone Belt one of the most interesting high grade gold jurisdictions in Ontario, containing the Baltimore Deformation Zone and Goudreau-Localsh deformation zone

Current focus is on targeting high-grade gold mineralization along the Baltimore Deformation Zone, which possibly represents the fault offset extension of the Goudreau-Localsh deformation zone that hosts the majority of the more significant showings and deposits in the camp and Manitou’s Patents project.

The Baltimore Zone is underexplored and highly prospective for discovery

Stover Zone (located within the BDZ)

Intersections at the Stover zone clearly confirm the presence of a significant gold mineralized system in this underexplored deformation corridor that has seen very limited historical drilling.

29 high-priority geophysical and geochemical targets are located along a 5 km segment of the Baltimore deformation zone.

Known gold mineralization occurs within a trend that extends for several kilometres along strike, where it remains untested by drilling

The fully funded drill program is testing 29 priority targets delineated with a combination of:

The focus of the current drilling is to test the BDZ, which is a large-scale deformation corridor and represents the fault-offset continuation of the Goudreau-Localsh deformation zone (the “GLDZ”).

The Goudreau-Lochalsh area currently hosts exploration on the western side of the belt on their Patents Project. 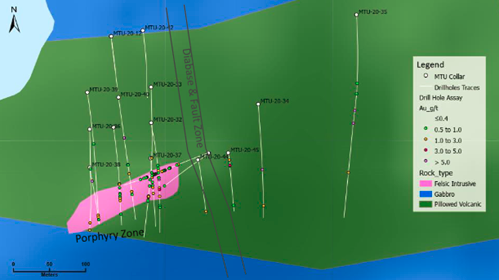 The patents covering the current Manitou Gold Inc. Goudreau Property date back to the 1930’s and there is no record of mineral exploration across the patents.  Work performed on the staked mineral claims that comprise the current Goudreau Property is also sparse, but seems to include line cutting and overburden stripping recorded by Longbow Exploration Inc. in 1997.

More regionally, the area around the towns of Goudreau and Lochalsh has been prospected since the turn of the twentieth century with the discovery of iron ore in the Michipicoten area southwest of Wawa.

o   The Earliest gold exploration in the Goudreau-Lochalsh area dates back to 1896 with the discovery of gold at Emily Bay located approximately 9 km to the southeast of Manitou Gold’s current Goudreau Property.

Intense gold exploration in the 1920s and the 1940s led to the discovery of significant deposits such as the Kremzar, Magino, Cline and Edwards Properties (Perkins, 2002)

Due to increasing gold prices and flow through funding in the 1980s, exploration within the area increased.  Companies such as Amax, Muscocho Explorations Limited, Canamax Resources Inc., Esso Minerals, Spirit Lake Exploration Limited, Golden Myra Resources and Corona Corporation completed significant exploration activities in the area which ultimately led to the development of advanced exploration and mining at the Kremzar (production of 46,798 oz Au @ 0.139 oz/t) and Magino Mines (~110,000 oz Au @ ~0.135 oz/t) and the Cline Mine (63,328 oz Au @ 0.19 oz/t) (Perkins, 2002).

o   Production at the last of these mines ceased in 1992, while the Edwards Mine operated by River Gold Mines suspended operations in 2001 (Perkins, 2002).

Prior to Northgate, Mr. MacPhail held increasingly senior roles at Noranda, Teck Resources, Homestake Mining and Barrick Gold. He holds a Bachelor of Applied Science degree in Mineral Engineering from the University of Toronto and is a licensed Professional Engineer in Ontario.

Mr.Blair Zaritskyisa is a Chartered Professional Accountant with more than 15 years of professional experience, principally in the mining sector.   Mr.Zaritsky currently serves as the Chief Financial Officer of O3 Mining Inc. and Osisko Mining Inc. (“Osisko”) and also serves as a director of Talisker Resources Inc. and formerly served as a director of Barkerville Gold Mines Ltd.

In August 2015, he was a key part of the successful merger off our companies that helped obtain the flagship Windfall Lake assets that has significantly grown Osisko to over$1-billion market capitalization. Mr.Zaritsky is currently a member of the CPA Canada.