Revolutionizing The Manner In Which Drug Formulations Are Administered

MVMD Takes Existing Vaccines and Drugs - And Delivers Them Better.

Both Into The Body and By Transportation To The World.

For the purposes of introducing you to Mountain Valley MD (MVMD), we’ll use vaccines as an example given the state of the world since COVID-19 arrived.  Specifically, we’ve all heard more about vaccines in 12 months than we have in the last 12 years.  One thing we all know about vaccines is that vaccination is the safest way to protect people against infectious diseases.

One thing we don’t know or understand about vaccinations is that they are only as good as:

1.  The global physical delivery system that actually gets them from the manufacturer to the hands of nurse who injects the vaccine;

2.  The delivery system into your body (i.e. injection)

If either parts of these delivery systems are weak, or even fail, a vaccine loses some or even all of its potency - and that’s not good.

This is where MVMD comes in.  They don’t make the vaccines, drugs or pharmaceuticals.

What they do is make their delivery better.  Their physical delivery until their ultimate delivery into your body - and that is very good.

By doing so, they help save lives and they help manufacturers be more profitable - and that is very good for humanity and shareholders.

Mountain Valley MD is building a world-class biotech and life sciences company organization centred around the implementation of its:

WATCH THIS POWERFUL 2-MINUTE IVERMECTIN CLIP BEFORE THE US SENATE

This is the delivery system into the body we talked about above and will discuss in further detail below.  As you will see, it too is incredibly exciting.

The Japanese scientist who discovered Ivermectin 30 years ago, was recently awarded the Nobel Prize in Physiology and Medicine for his discovery of Ivermectin

Ivermectin is on the World Health Organization's List of Essential Medicines. It is an antiparasitic drug that was valued at US$7.2 billion in 2019 - but has suddenly become significantly more relevant as a “Wonder Drug” for dealing with COVID-19.

As you will see further below, MVMD has made the impact of Ivermectin better by several magnitudes, with 500% and 600% increases in key performance metrics, which in turn has created a massive market opportunity for the Company.

There are 2 markets MVMD is targeting and going after:

This is obvious and you would think it is their biggest market.  It is not.

The market for animals is not only bigger than the human market by several magnitudes, it is also an easier market to address given the fact millions of animals can be culled and hundreds of millions of dollars lost with just one virus outbreak.

The injectable delivery of vaccines and drugs is the most well known.

Sublingual, from the Latin for "under the tongue", is a way of giving medication by placing the drug beneath the tongue.  They are absorbed and dissolved into the bloodstream because the area underneath the tongue has tiny blood capillaries. Therefore, drugs are absorbed directly and quickly into the body without passing through the digestive system.

The nature of sublingual delivery means it can only apply to humans.

Topical means applying medicine to a localized part of the body and is administered by applying directly to the skin, but can also include the nose and eyes to absorb medication.

Generally speaking, a cold chain is a temperature-controlled supply chain for a product that requires a specific temperature range during distribution.

The most common example that we can all relate to is the distribution of food such as meats or milk. When we buy these at the store, they are refrigerated and have been refrigerated all the way back to when they were packaged.

They even remain refrigerated at your home until the moment you decide to consume them.

VACCINE COLD CHAINS - Most of us probably don’t realize that vaccines have to go through the same process.  The government of Canada website generally describes it as follows:

THE IMPORTANCE OF MAINTAINING THE COLD CHAIN

Vaccines are sensitive biological products that may become less effective, or even destroyed, when exposed to:

Over 95% of all approved biologics and 90% of all vaccines are cold chain dependent.  According to the data presented by the WHO, the current global vaccination coverage is nearly 85%.  However, it has been reported that 25% of vaccines are damaged due to cold chain malfunction. In some countries, about 80% of the drugs are estimated to lose their potency due to inadequate temperature control during their cold chain transportation.

WHAT CAUSES THE COLD CHAIN TO BREAK?

There are many situations that can cause a vaccine cold chain to break including:

However, the biggest cause of a vaccine cold chain break comes from the fact that people who need vaccines the most - the most vulnerable - live in areas with poor infrastructure, let alone refrigeration.

According to the NCBI:

Vaccine preventable diseases like polio, measles, and hepatitis are a major cause of morbidity and mortality among children in developing countries. Vaccination is one of the most effective disease prevention strategies when implemented properly across all sections of the at-risk population. Immunization against a disease is achieved only if a potent vaccine is administered. The system used for keeping and distributing vaccines in good condition is called the “cold chain.”

For some vaccines, even the slightest variations in temperature / storage conditions can adversely alter product integrity and / or viability.

Unfortunately, vaccination rates in India indicate a considerable disparity between children in urban compared with rural areas.  Only 27% of the population lives in the urban parts of the country. The weak health infrastructure and unsanitary conditions contribute to the increased incidence of diseases like polio, cholera, and hepatitis in rural areas compared with the urban areas.

On January 14, 2021 Mountain Valley MD Was Awarded A Canadian Patent for its Quicksome™ Technology.  Quicksome™ uses an advanced two-step process to formulate active ingredients, which previously could not be absorbed and used by the body, into highly effective oral product formats.

Quicksome™ technology is being applied across a variety of vaccine, drug and nutraceutical applications across numerous continents:

On December 10, 2020, MVMD released pre-clinical trial data where a solubilized version of the drug Ivermectin was administered via its Quicksome™ technology, as compared to an existing oral Ivermectin solution.  The results demonstrated the Quicksome™ technology was able to successfully administer Ivermectin across the mucosa (The moist, inner lining of some organs and body cavities ), with a significant improvement in the pharmacokinetic performance (the movement of drug into, through, and out of the body) compared to current oral formats.

HOW MUCH BETTER WAS IVERMECTIN WITH Quicksome™?

Just how substantial are these improvements?  This quote says it all:

“MVMD Has Succeeded In Making A Nobel Prize Winning Wonder Drug Even Better Based On Overcoming Its Number One Limitation Of Solubility.”

“For me personally, the idea that our delivery technology could help dispense drugs such as insulin or deliver vaccines into the body through a rapid dissolve sublingual strip and eliminate the need for painful needle injections is truly game changing.” 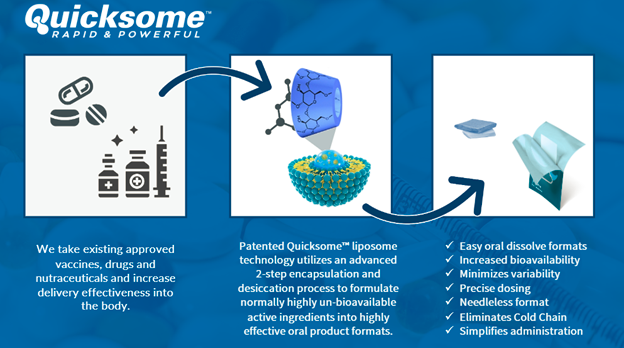 WHY IS SOLUBILITY SO CRITICAL

Poor solubility causes low bioavailability (the degree and rate at which a drug is absorbed into the body).  As you can imagine, low solubility and absorption often decrease a drug’s efficacy.  As a result, poorly soluble drugs require higher doses in order to reach their optimal therapeutic levels, leading to problems such as gastrointestinal mucosal toxicity (a membrane that lines various cavities in the body and covers the surface of internal organs)  - and you don’t need a medical degree to know that isn’t good.

On its face, this seems both logical and probably simple to solve. It isn’t. In fact it’s a major problem for both society and the businesses of pharmaceutical companies.

HOW BIG OF A PROBLEM IS SOLUBILITY? MEDICATIONS MAY NEVER MAKE IT TO PATIENTS WHILE WASTING DRUG DEVELOPERS TIME AND MONEY

“It is generally recognized that poor solubility is one of the most frequently encountered difficulties in the field of pharmaceutics.”

Poor solubility can lower a drug’s chance of marking it to market.

As you can see, this is a problem because drug developers waste time and money on medications that will never make it to patients. 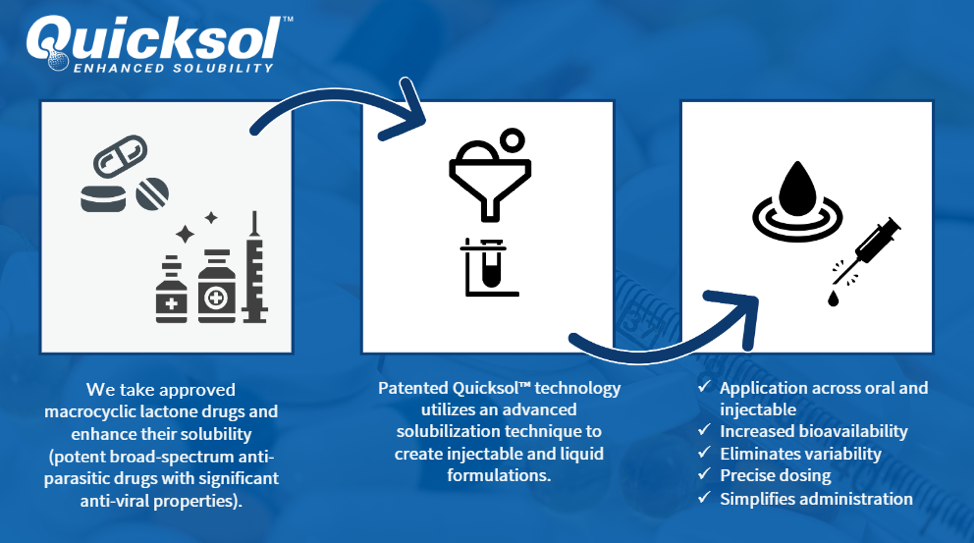 Simply put, Quicksol takes known drugs that are inefficient in delivering their intended medicinal purpose and makes them soluble. Quicksol™ improves them by increasing the ability to deliver more of the drug effectively through increased solubility

The use of Ivermectin in Canines is being studied in 2021 and early results demonstrate that an injection into the muscle increases bioavailability by 800% versus injecting subcutaneously, (which is the layer between the skin and muscle)

On January 14 2021: The US National Institute of Health (NIH - US Department Of Health & Human Services) Revised It's Treatment Guidelines for Ivermectin for the Treatment of COVID-19