New Age Metals Inc. (TSXV:NAM); (OTC:NMTLF); (FSE:P7J.F) Harry Barr, Chairman & CEO, stated; “We are pleased to provide shareholders with a corporate update to detail our planned exploration and development activities for our portfolio of North American green metal projects in 2021.”

NAM is focused on advancing River Valley to a Prefeasibility study. This study would be based on completion of metallurgy, hydrogeology, geotechnical surveys, an updated mineral resource estimate, environmental baseline, infill and exploration drilling. Management has received quotes from third party engineering and environmental firms and confirmed a budget for the study. Subject to the completion of the recently announced financing, management plans to initiate this study in the first half of 2021. Our objective is to complete the Prefeasibility study on or before the end of the first quarter of 2022.

NAM’s technical team is finalizing a phase one drill program for up to 5,000 metres for the northern portion of the River Valley Project. Next phases of drilling will focus on the Dana North, Dana South, Pine, Banshee, Lismer and Pardo Zones (Figure 1) given their fundamental importance to any potential mining operation at River Valley. The occurrence of surface mineralization in the River Valley Intrusion, drill hole mineralization and geophysical chargeability east of the footwall boundary of the current resource model are all strong indicators of mineralization that could be added to a future resource model. Proposed drill targets are illustrated in Figure 1 below. 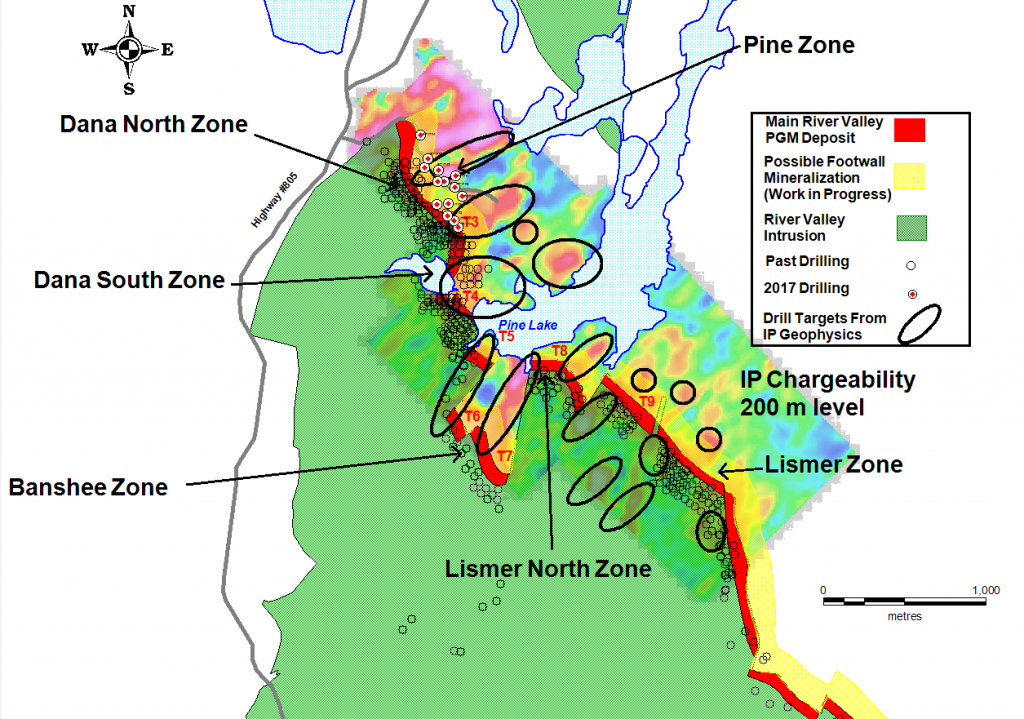 In 2020, the company conducted a follow-up round of surface exploration work on its Lithium One Project to generate future drill targets. See the January 12 press release to read about the positive results of this study. Samples from a previous work program on the project were taken from the Silverleaf and Annie Pegmatites and not only returned significant Li20 assays of up to 4.1% but heightened levels of Rubidium Management have made a second application for a grant from the MMDF with the objective of co-funding a drone magnetometry geophysical survey on the Lithium Two, Lithman West and Cat Lake Lithium Projects.

The Company has seven Lithium and Rare Element Projects in the Winnipeg River Pegmatite Field, located in South East Manitoba and situated around the Tanco Mine. The world-class Tanco Pegmatite is a highly fractionated lithium-cesium-tantalum (LCT)–type pegmatite that has historically been mined as an underground operation (Tanco Mine) since 1969 for Li, Ta, Cs, Rb and Be ores. The Tanco Pegmatite is a very rich tantalum, spodumene and cesium deposit with it being the world's most significant and richest known source of cesium representing more than two-thirds of the world's reserve.

Harry Barr, Chairman & CEO stated that “After several years of positioning our company with one of the largest claim holdings in the Winnipeg River Pegmatite Field and completing sufficient field work to identify several drill targets and with drill permits in hand, the Company is ready to become more aggressive in exploring its lithium project portfolio. We are excited to conduct our first drill campaign on a historical surface exposed lithium-cesium-tantalum type pegmatite.”

The Genesis PGM-Cu-Ni Project is an under explored, multi-prospect drill ready property.  The stable land status, ease of access and excellent infrastructure make this project prospective for year-around exploration, and development. Genesis is a PGM-Cu-Ni reef style target with surface mineralization including up to 2.4 g/t Pd, 2.4 g/t Pt, 0.96% Ni and 0.58% Cu that has been identified. To date, mineralization has been traced for 2,000 metres along surface. Management is currently reviewing the possibility of completing an Induced Polarization geophysical survey on the project in 2021. In 2021 NAM’s management continues to seek an option/joint-venture partner for this road accessible PGM-Cu-Ni Project using the Prospector Generator business model.

NAM welcomes shareholders, investors and other stakeholders to follow our Virtual Non-Deal Roadshow series with Renmark Financial Communications Inc., where they can get direct access to NAM management and hear about our corporate activities. We will continue our series in March with Renmark on Wednesday the 16th and Monday the 29th. Click the link here to see our Renmark profile page and find information on our upcoming presentation schedule and more.

The Company is slated to participate in the Mines and Money Online Event from March 23-25 where management looks forward to meeting with institutional funds, private equity groups, family offices and sector analysts. The Company will be participating in Mines and Money online events in March, May, June and September this year and is evaluating other opportunities for conferences in 2021.

If you have not done so already, we encourage you to sign up on our website (www.newagemetals.com)to receive our updated news.

The PGM Division includes the 100% owned, multi-million-ounce, district scale River Valley Project, one of North America’s largest undeveloped Platinum Group Metals Projects, situated 100 km from Sudbury, Ontario. The Company has recently completed a Preliminary Economic Assessment on the project and subject to financing, plans are to complete a Prefeasibility Study by the end of the first quarter of 2022. In Alaska, the Company owns 100% of the Genesis PGM-Cu-Ni Project.

The Lithium Division is one of the largest mineral claim holders in the Winnipeg River Pegmatite Field, where the Company is exploring for hard rock lithium and various rare elements such as tantalum and rubidium. 2021 plans include drone geophysics on three of the Company’s seven projects and a drill program on the Company’s Lithium Two Project

Our philosophy is to be a project generator with the objective of optioning our projects with major and junior mining companies through to production. The Company is actively seeking an option/ joint venture partner for its road-accessible Genesis PGM-Cu-Ni project in Alaska and for all or part of our Lithium Division in Manitoba.

On behalf of the Board of Directors