Babjak1
Rank: President [?]
Points: 44258 [?]
Votes: 341 Score: 3.9 [?]
Your Vote:
Please Log In to Vote
Follow
Did you know? You can earn activity points by filling your profile with information about yourself (what city you live in, your favorite team, blogs etc.)

The East west route makes sense for many reasons

It is also the route that taxpayers paid $787,628  for the study. There was no such investment for study by both governments for a north south road.

But there is something else that can be seen in the original News Release. it is this paragraph and in particular the sentence bolded and underlined:

"The project will bring road access to the Ring of Fire, as well as Webequie, Eabametoong, Neskantaga, and Mibinamik over time. Additionally it would allow access to electrical power grid for the mining development and the First Nations.

The cost of power in the north for First Nation Communities is massive as electrical power is produced with diesel generators."

Noront's PR person in the past stated this:(note the "route for transmission infrastructure"

The route would upgrade an existing winter road to all-weather status. Among its advantages, it “avoids provincial parks, avoids areas of special interest to aboriginal groups and provides the greatest benefit to first nation communities,

Goldcorp's transmission project became the Watay project in the end.

Originally the start was late fall 2019 for the watay project construction .. and is now first quarter 2020

Watay Project is expected to be completed by 2023. Upon completion, it is expected to become one of the largest electric infrastructure projects designed to connect remote societies in Ontario to the provincial transmission grid.

TORONTO - The Ring of Fire mining project in Northwestern Ontario is getting a boost from the a plan announced in Toronto at the Prospectors and Developers Convention in Toronto.

Greg Rickford, Canada's Minister of Natural Resources and Minister for the Federal Economic Development Initiative for Northern Ontario (FedNor), and the Honourable Michael Gravelle, Ontario's Minister of Northern Development and Mines, will be at the Prospectors and Developers of Canada (PDAC) convention in Toronto on Sunday, March 1, 2015, to announce government funding to strengthen the economy and create jobs.

The Government of Canada and the Province of Ontario will each invest $393,814 to enable the Webequie First Nation, in partnership with the First Nations of Eabametoong, Neskantaga and Nibinamik, to complete a regional community service corridor study.

This investment is consistent with the federal and provincial governments' position that targeted investments can help advance community access in the Ring of Fire region.

"This partnership lays the groundwork for First Nations to come together to explore options for a community service corridor that could lead to multi-generational benefits associated with resource development in the region. The study supports Ontario's plan to drive development in the Ring of Fire and ensure the tremendous potential of the Ring of Fire can be realized for First Nations, Ontario and for Canada," stated an enthusiastic Michael Gravelle Minister of Northern Development and Mines and Chair of the Northern Ontario Heritage Fund Corporation.

"This important study will help Eabametoong First Nation and other remotes work together to consider options for road development in the area. We are pleased to see both levels of government supporting this work, since it will be a helpful tool for our Nation as we plan for a prosperous and sustainable future," commented Chief Elizabeth Atlookan Eabametoong First Nation.

"Establishing a year-round transportation corridor for the region is vital to ensure the health and economic well-being of First Nation communities in the area and this important project will help us achieve that goal," said Chief Peter Moonias Neskantaga First Nation.

"We have worked very hard in the past few years as remote First Nations to look at improving overall accessibility for our community members and this community service road corridor study will help us define viable options for us based on community values," shared Chief Johnny Yellowhead Nibinamik First Nation.

The study will examine the benefits of developing an all-season transportation corridor connecting First Nation communities in the area with existing roadways, enabling them to capitalize on opportunities related to resource development in the region, including the Ring of Fire. 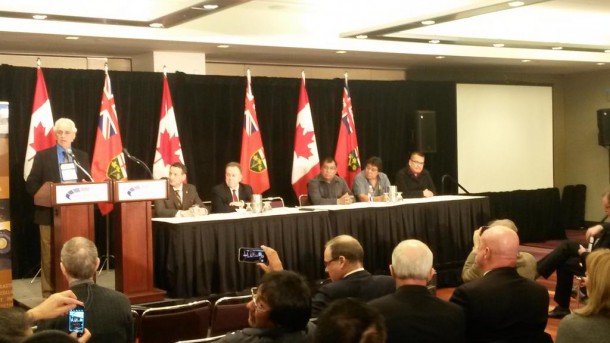 This announcement will be made in partnership with the First Nations of Webequie, Eabametoong, Neskantaga and Nibinamik. 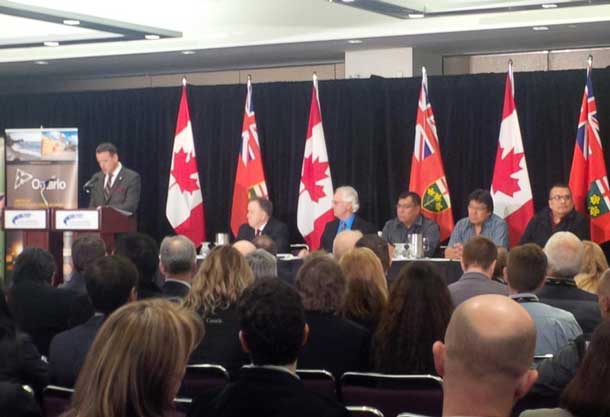 Natural Resources Greg Rickford, and Ontario Minister of Northern Development and Mining Michael Gravelle have announced a plan to put $780,000 into a study to bring the road to the resource bounty of the Ring of Fire into a roadway.

The project will bring road access to the Ring of Fire, as well as Webequie, Eabametoong, Neskantaga, and Mibinamik over time. Additionally it would allow access to electrical power grid for the mining development and the First Nations.

The cost of power in the north for First Nation Communities is massive as electrical power is produced with diesel generators. 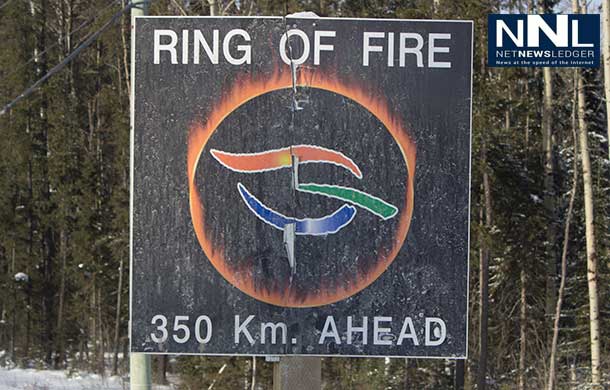 The Ring of Fire will impact First Nations in Northern Ontario.

Mining wise the road access plan enhances the potential for development of the nickel, and chromite in the Ring of Fire.

MarlboroDog
Forgot your username or password? Recover it here
Not a member yet? Register
Didn't receive confirmation instructions? Resend