Ringer
Rank: President [?]
Points: 15317 [?]
Votes: 67 Score: 3.6 [?]
Your Vote:
Please Log In to Vote
Follow
Did you know? You can earn activity points by filling your profile with information about yourself (what city you live in, your favorite team, blogs etc.)

As usual...funny they cannot partcipate when they are all fully vaccinated.

Chief Wayne Moonias has written a letter to government officials saying his community is unable to fully participate in discussions and consultation due to the COVID-19 pandemic.
18 minutes ago By: Doug Diaczuk 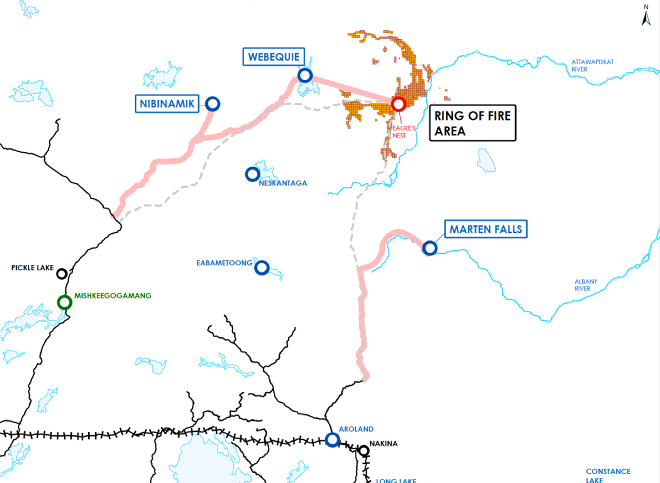 NESKANTAGA FIRST NATION, Ont. - Leaders with Neskantaga First Nation are calling for a halt to an environmental assessment for a proposed road to the Ring of Fire in Northern Ontario, saying the community is already facing numerous emergencies and the communities voices are only being marginalized further.

Chief Wayne Moonias wrote a letter to various government officials and First Nations leaders saying the community’s decision-making is being undermined by the province during a pandemic.

Moonias said the pandemic has made the situation in Neskantaga even more precarious and it is facing a triple pandemic in the form of a health emergency, an ongoing water crisis, and now the environmental assessment for the prosed road to the Ring of Fire.

“We reject the claim that an environmental assessment of a mining road should be treated like an essential service during a pandemic,” Moonias writes.

“By downplaying the real threats of the pandemic in our community, continuing to run the process by any means available, and ignoring the fact that it is more challenging for Neskantaga to get information to participate, Ontario is weakening the already limited measures, which do not exist to address meaningful participation by Indigenous communities in environmental assessment.”

The letter comes less than a week after Marten Falls and Webequie First Nations issued a joint statement saying they are taking the lead on the environmental assessment while also asking other communities to respect their role in the process. The official Notice of Commencement of the development of the terms of reference was expected to begin last week.

Moonias writes in the letter that Neskantaga has repeatedly asked for a pause in the environmental assessment with respect to the terms of reference of the Marten Falls access road.

“Meaningful consultation requires that the conditions exist for our community to implement in-person deliberation and decision-making protocols as per our own Indigenous legal orders, as this project will have a profound impact on our Aboriginal and Treaty Rights. The continued pandemic means those conditions are not met.”

According to the letter, the pandemic has impacted Neskantaga’s ability to practice its own governance mechanisms and implement protocols.

“Elders who hold important and necessary knowledge about community protocols, local ecology, and cultural sites have been unable to contribute to community discussions because of their particular vulnerability to COVID-19,” Moonias writes.

Travel restrictions have also precluded off-reserve members from participating in discussions about the terms of reference.

Moonias adds that remote communication and video-conferencing is not feasible either and not appropriate in light of Indigenous cultural and political protocols for collective deliberation.

“For this reason, the proponents’ offer to hold webinars cannot possibly constitute meaningful consultation or uphold the Honour of the Crown in these circumstances,” Moonias said.

The letter also calls into question the terms of reference for the Marten Falls access road, saying it is unlawful as it adopts too narrow a scope and amounts to ‘project splitting.’

“Neskantaga First Nation is concerned that Ontario, as both the funder and regulator of the road projects, is encouraging ‘project splitting,’ which is intentionally breaking up a project into its component parts in order to avoid genuinely considering all of the expected environmental, social, and economic impacts at the appropriate scale.”

Moonias goes on further to say all sections of the North-South road to the Ring of Fire should be assessed as one project.

“We can’t imagine a worse time for an environmental assessment,” Moonias concludes.

“Simply put this is the wrong process at the wrong time. We should not be expected to make these important decisions under duress. We have to preserve our community until this disease is over, because it is dangerous. We demand that Ontario pause all environmental assessment processes in the Ring of Fire until the pandemic is over.”