How The Cannabis Industry Is Revolutionizing The Beverage Sector

Canada legalized adult use of cannabis in 2018, and is slated to legalize cannabis infused edibles by October 2019.

In the European Union, the legal status of cannabis varies by country. Medical cannabis is legal in Germany, Czech Republic, Italy and Malta. The UK is also moving to legalize medical cannabis. The status of edibles in the EU is legally unclear.

Cannabis has been decriminalized or made legal throughout most of South and Central America, as well as Africa. Australia has legalized medical cannabis, and New Zealand is expected to legalize both medical and adult use cannabis in 2020. It is mostly legal in India and Sri Lanka, but is still illegal in many Asian countries.

The Cannabis Industry is Primed to Takeoff

The size of the American medical and adult use cannabis market has been estimated at $12 billion in 2018 and, according to Arcview Group, is projected to increase to $23 billion in the US and $32 billion globally by 2022.

The term cannabis is generally used to describe what was previously referred to as marijuana. Cannabis sativa cultivars that have a concentration of tetrahydrocannabinol (THC), the psychoactive drug that causes users to get high, above .3% are referred to as cannabis. The term hemp, on the other hand, is used to describe Cannabis sativa cultivars whose concentration of THC is less than .3% and are considered non-psychoactive.

The term cannabis industry, however, is applied both to cannabis derived products, as well as cannabinoids derived from hemp.

Cannabidiol (CBD) is one of more than 100 different cannabinoids that are found in Cannabis sativa. Unlike THC, CBD won’t make you high.

CBD has been linked to a broad range of health benefits, from treating insomnia, to anxiety, seizures, inflammation and chronic pain. It has also been found to provide mild relaxation without any intoxicating effects. Although these claims are widely accepted, there is little FDA or peer reviewed research available on CBD’s health benefits. CBD, however, has been cleared by the FDA for use in an epilepsy drug called Epidiolex.

Other cannabinoids, like Cannabichromene (CBC), Cannabigerol (CBG) and Cannabinol (CBN), also show promise, but their medical applications have been little studied. Many commercial CBD oils are actually a blend of CBD and various other cannabinoids.

While significant, the long-term size of the adult and medical cannabis market is dwarfed when CBD infused products, such as beverages,  foods, health and wellness products, as well as CBD oils and powders, are added to the broader cannabis market estimates.

Greenwave Advisors have estimated the North American CBD market at $3 billion by 2021 and, eventually, possibly, as large as $200 billion. Grand View Research has estimated the legal global cannabis market, including CBD products, reaching $146 billion by 2025. According to, Jamie Fay, President and COO of Gabriella’s Kitchen, a producer of CBD and THC infused beverages and foods, the size of the CBD and THC infused products market will be 10 to 20 times the size of cannabis flower and concentrates.

Other estimates have placed the CBD market at $16 billion by 2022 or $25 billion by 2025. Projections can vary widely since there is no consistent definition of what constitutes the “CBD market”; especially whether that definition should include just the value of the CBD itself or the value of the end products that contain it. Likewise, some definitions of medical cannabis include only products derived from cannabis, while others include cannabinoids derived from hemp.

Currently the legal status of many CBD infused products is unclear. CBD derived from hemp is legal at the federal level. CBD derived from cannabis is not. Chemically, however, they are identical. Since CBD is classified as a pharmaceutical, the FDA has claimed oversight on any commercially sold beverage or food that includes it. State regulations vary widely.

Individuals can, in those states where it is legal, incorporate CBD oils and powders into beverages or foods for private use. In addition, CBD infused lotions and topical creams are widely available. Since these are not edibles, there are no FDA restrictions on their use, although states may impose their own rules.

Some states have allowed the sale of CBD infused edibles through licensed dispensaries, even though such sales are a violation of FDA regulations. In California, for example, CBD infused beverages and foods are legal, under state laws, in licensed dispensaries. They are illegal elsewhere, but are widely sold outside the dispensary channel. Regulators in several places, including New York City and Los Angeles, have said they will fine or cite unauthorized vendors of CBD edibles. 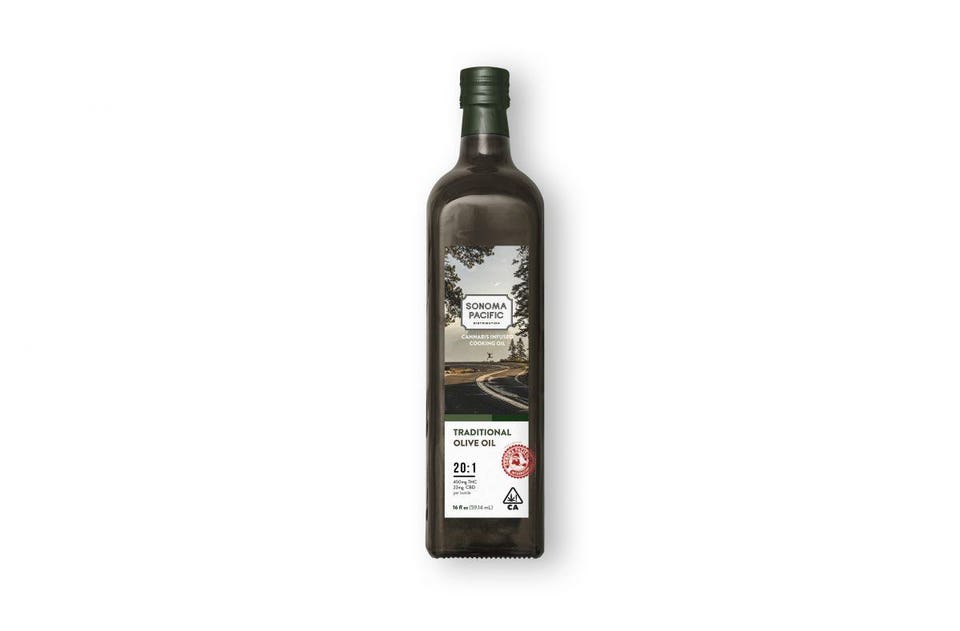 According to Consumer Reports, there are now hundreds of CBD infused products available in the US, even if the legal status of many of those products is still in limbo.

Cannabis and the Beverage Industry

Not surprisingly, large beverage companies have been among the first movers in developing THC and CBD infused drinks. Beer companies, confronting a 5-year decline in US beer consumption, have been the most aggressive.

Drinks giant Diageo, which owns Guinness Brewing, is in talks with several Canadian cannabis companies to develop cannabis-based beverages. Molson Coors Brewing company is in a joint venture with Hexo Corp to develop cannabis-based drinks for the Canadian market, while Lagunitas, a craft beer owned by Heineken, has launched HiFi Hops, a beer flavored sparkling water that contains both CBD and THC.

Coca Cola, Pepsi and Starbucks have all indicated that they are monitoring developments, but have no plans at this time to pursue cannabis based or infused beverages. Although Coca Cola was rumored to have been in talks at one time with Canadian based Aurora Cannabis to develop CBD infused drinks.

On April 26, 2019, the Alcohol Tobacco Tax and Trade Bureau (TTB) issued an industry circular reaffirming that in accordance with FDA guidelines, CBD may not be included in any alcoholic beverage.

A few days later the FDA announced that it would hold public hearings on May 31, 2019, relating to the legality of CBD as a food additive. The FDA also announced the formation of an FDA working group chaired by Amy Abernathy, Principally Deputy Commissioner, and Lowell Schiller, Principally Associate Commissioner, “to consider potential paths forward.” The FDA also updated its website to offer more information on CBD.

CBD and the Future of the Cannabis Industry

The expected growth of the CBD infused beverages and foods will transform the cannabis industry; taking it in a very different direction than its initial trajectory. In the process, ushering in a second, even greater, growth phase and an entirely new group of beverage and food industry startups.

The first phase of the cannabis industry focused on medical and adult uses of cannabis. The major players that emerged in North America, Canopy Growth, Tilray, Aurora, etc., as well as the smaller American state-based producers, all focused on growing cannabis. The initial result, especially in the US where interstate transport of marijuana is still illegal, has been soaring production far exceeding demand.

Oregon, for example, one of the first states to legalize medical and adult use cannabis, produced over one million pounds of cannabis flower bud in 2018, versus a demand of around 300,000 pounds. The result was that prices dropped by 50%. Although the price drop spurred additional demand, production still exceeds demand by a factor of 2 to 1.

Pending applications by new producers would result in a doubling of production over the next several years. According to the Oregon Liquor Control Board, which is tasked with regulating the cannabis industry, as of January 1, 2019, the amount of inventory in Oregon for the adult use market amounted to a 6.5 year supply. There are comparable surpluses in other states.

Cannabis grown for the adult market could, if legalized, be used as a source of CBD. There is a far more plentiful, legal source of CBD however—hemp.

The 2018 Agricultural Improvement Act legalized the production of hemp in the US. Hemp cultivation is already legal in Canada and the EU. Hemp are varieties of Cannabis sativa that is grown for their fiber, seed and other products, and are naturally low in THC.

According to the Federation of American Scientists, hemp has more than 25,000 different uses, including fabric, food, building materials, ethanol and biodiesel. It can produce a ton of finished textile fiber, for example, on half the land that cotton would require. Moreover, hemp is naturally drought tolerant and highly resistant to many insect pests and plant diseases.

Levi, Columbia Sportswear/prAna and Patagonia are among the companies making clothing from hemp or hemp/cotton blends. Hemp is also a source of hemp seed oil and hemp seeds. More importantly, the residue after hemp has been harvested can be processed to extract CBD and other valuable cannabinoids.

Canapar, a 49% subsidiary of Canopy Rivers, the venture capital arm of Canopy Growth, is building Europe’s largest CBD extraction facility in Ragusa, Sicily. The facility will extract CBD and other cannabinoids from what was traditionally hemp waste. Hemp cultivation is proving to be 10 times more profitable per acre for local farmers than growing wheat, the regions previous cash crop, and that’s before factoring in the value of the hemp waste as a source of CBD.

Oregon based Xtract Xperts operates one of the first and among the largest, extraction facilities specifically designed to extract CBD and other cannabinoids from hemp. The company has contracts with 52 farmers to grow around 2,000 acres of hemp. Oregon is the third largest producer of hemp in the US, with roughly 7,800 acres under cultivation. Montana (22,000 acres) and Colorado (21,500 acres) are the two largest producers. According to Cindy Wyant, the founder and CEO of Xtract Xperts, Oregon grown hemp, however, has twice the volume of hemp grown in Colorado or Montana, and the CBD yield is 12% to 20% of the hemp’s dry weight versus 5% in more arid areas.

According to Fenn, the potential value of the CBD and other cannabinoids in an acre of hemp in Alberta, Canada’s largest hemp producer, could be worth between $50,000 and $100,000. A similar analysis by Future Farm, a Maine based hemp grower, pegged the value at $90,000. Wyant, however, estimates than an acre of hemp in Oregon will generate upwards of $300,000. These numbers represent the gross value and do not include the cost of growing the hemp or extracting the CBD. More importantly, according to Wyant, plant breeders are already working on developing strains of hemp with higher levels of cannabinoids.

If CBD infused beverages and foods becomes the principal driver of the broader cannabis industry, rather than adult and medicinal cannabis, then hemp will be a far cheaper and more plentiful source of CBD. Cannabis will become a small subset of a much larger, CBD driven, hemp based, North American cannabis industry.

Currently, US regulations limit the varieties of hemp that can be cultivated to ones that do not contain more than .3% THC. Canada has a comparable limit, while the EU regulations set the limit at .2%. These limits are arbitrary, and were set before hemp was considered as a source of CBD.

Raising the limit of THC in hemp from .3% to say .99% (the standard in West Virginia), still well below the psychoactive level for most people, could increase the yield of CBD significantly, depending on the strain. A higher limit would make the extraction of CBD from hemp more efficient.  Other than for cannabinoids, the THC level has no bearing on the use of hemp for fiber or other products.

The future of the cannabis industry is not just going to be adult and medical use cannabis but the inclusion of CBD in a large array of beverages and foods That trend has already started, and will quickly accelerate with the national legalization of cannabis and the creation of a regulatory structure for inclusion of CBD in edibles. That means that CBD and hemp will figure prominently in the future of both the beverage and the cannabis industry.