Canada's Next Low-Carbon High-Grade Nickel Mine

Add Power Nickel Inc. widget to your own site or blog

Power Nickel Inc. (the "Company" or "Power Nickel") (TSX-V:PNPN)(OTCQB:CMETF)(Frankfurt:IVVI) and Critical Elements Lithium Corporation ("Critical Elements") (TSX-V: CRE) (USOTCQX: CRECF) (FSE :F12) are pleased to announce results from the third and final set of drill holes from its recent drill program at its "NISK" Nickel Sulphate project near James Bay. These drill results confirm the presence of high-grade Nickel Mineralization in the eastern and central deep portions of the Nisk Main mineralized lens. In addition to the historic and previously released assays, these new results (PN-21-001 and PN-21-004) continue to demonstrate a good grade and thickness continuity. (Current holes are in Bold in Table below) 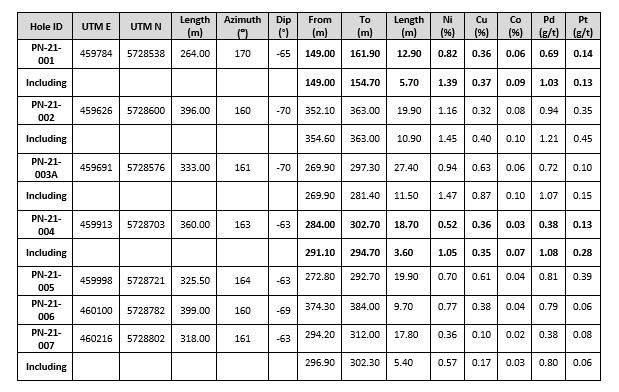 The illustration below details the current location of drill holes covered in this release, as well as the previous releases dated March 1 and March 14, 2022. 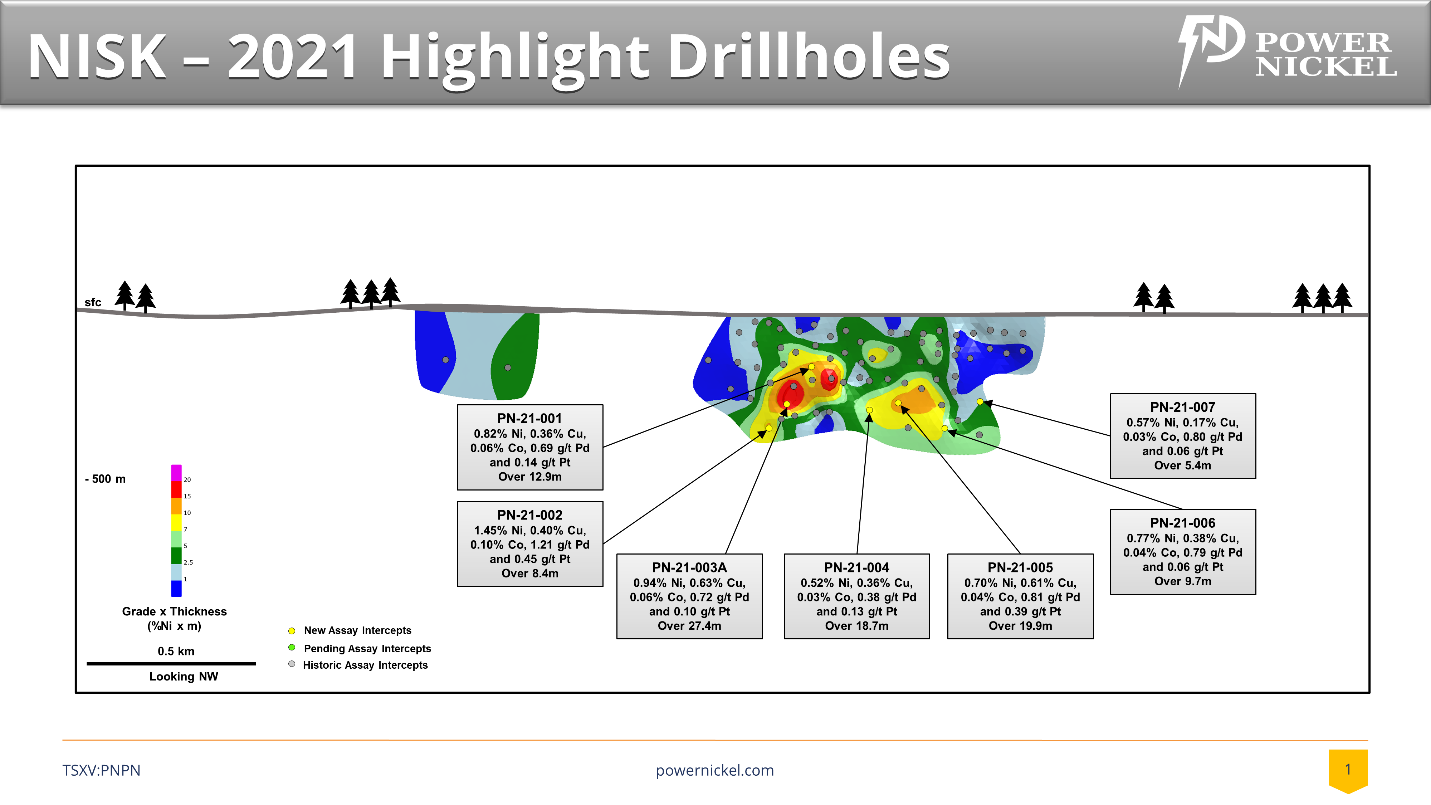 "These results are another positive indication that Nisk is a very exciting Nickel Sulphate discovery. Our objectives in this initial drill program conducted by Power Nickel were to produce enough drilling to allow us to establish a new NI 43-101 compliant resource to confirm and replace the historical resource, and to extend the known Nickel mineralization. We believe we have established the latter and expect to be able to deliver a NI 43-101 compliant Mineral Resource Estimate in Q2. Further, these results have made us confident enough to commence execution of an additional fully funded 5,000-meter drill program which we would expect to start later in Q2 after breakup.", commented Power Nickel's CEO Terry Lynch.

The existing resource estimates at the Nisk project are of historic nature and the Company's geology team has not completed sufficient work to confirm a NI 43-101 compliant mineral resource. Therefore, caution is appropriate since these historic estimates cannot, and should not be relied on. For merely informational purposes see Table 1.

The information regarding the NISK-1 deposit was derived from the technical report titled "Resource Estimate for the NISK-1 Deposit, Lac Levac Property, Nemiscau, Québec" dated December 2009. The key assumptions, parameters and methods used to prepare the mineral resource estimates described above are set out in the technical report.

The 3D geological model developed by 3DGeo Solution Inc. ("3DGS") identified a prospective set of targets that the Company feels will give the best potential to expand the Nisk historical deposit. The image below is a view of the mineralization projected from the surface of the area we refer to as Nisk Main. 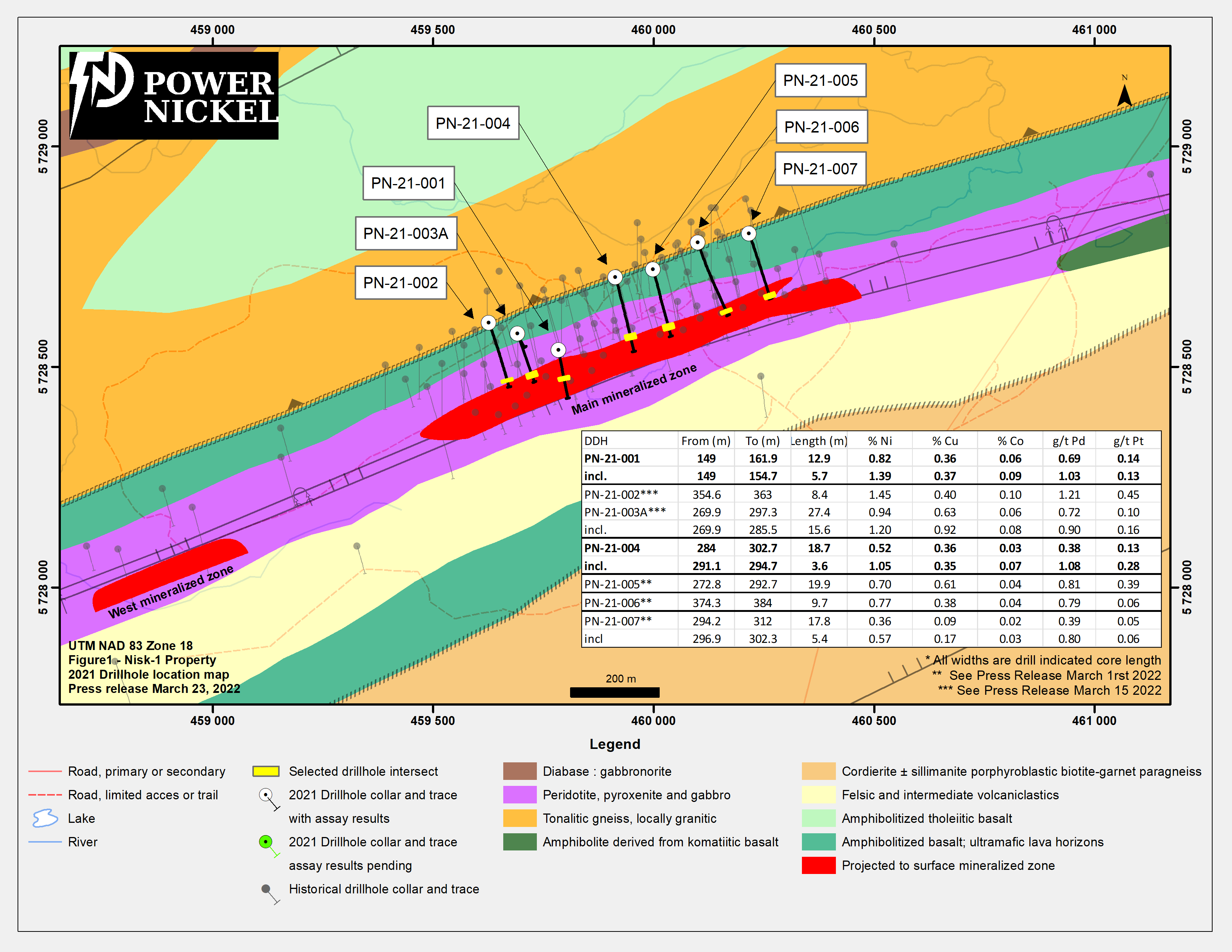 "Nisk has four distinct target areas covering over 7 Kilometres of strike length. Our focus this round was on the Nisk Main target. Historically, we know globally these types of deposits typically have multiple pods. We are encouraged by what we see on Nisk Main and feel we can continue to build commercial tonnage there but we are also looking forward to exploring Nisk West and the two wildcat targets in subsequent drilling in Q2", commented Power Nickel's CEO Terry Lynch. 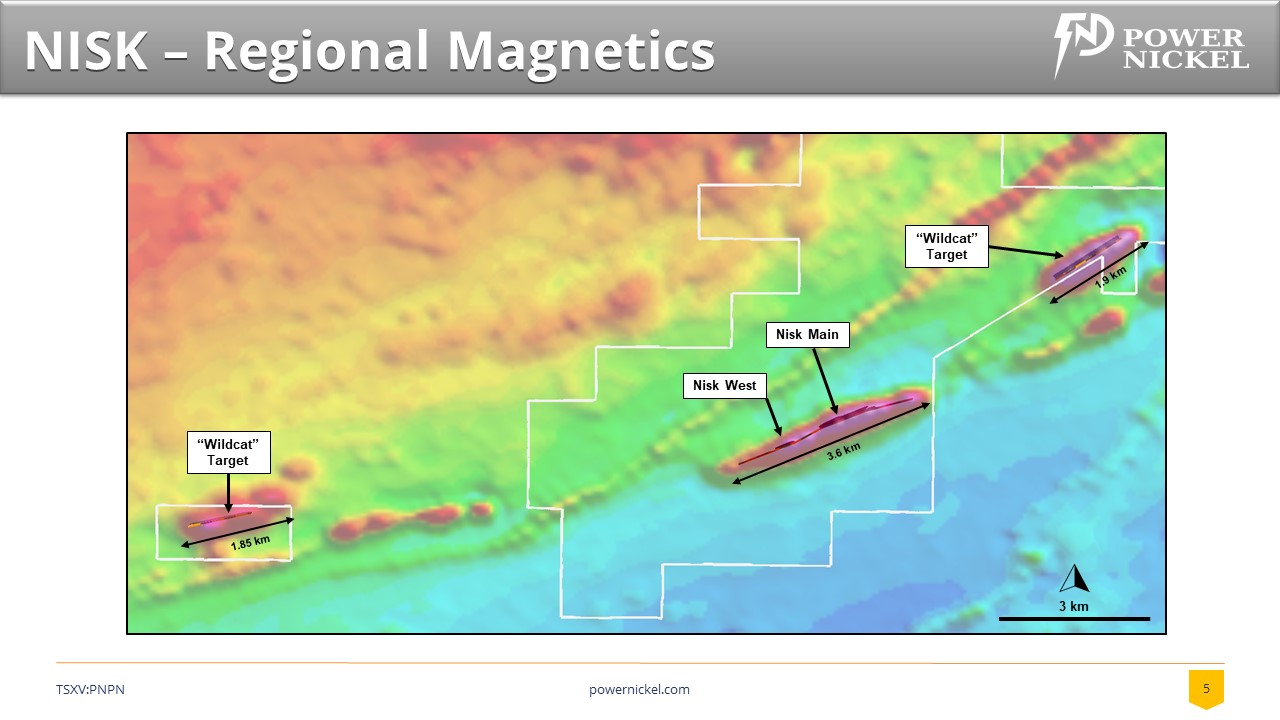 Nisk is located south of James Bay as illustrated in the area map below. This region is the site of a number of mining projects and improving infrastructure. 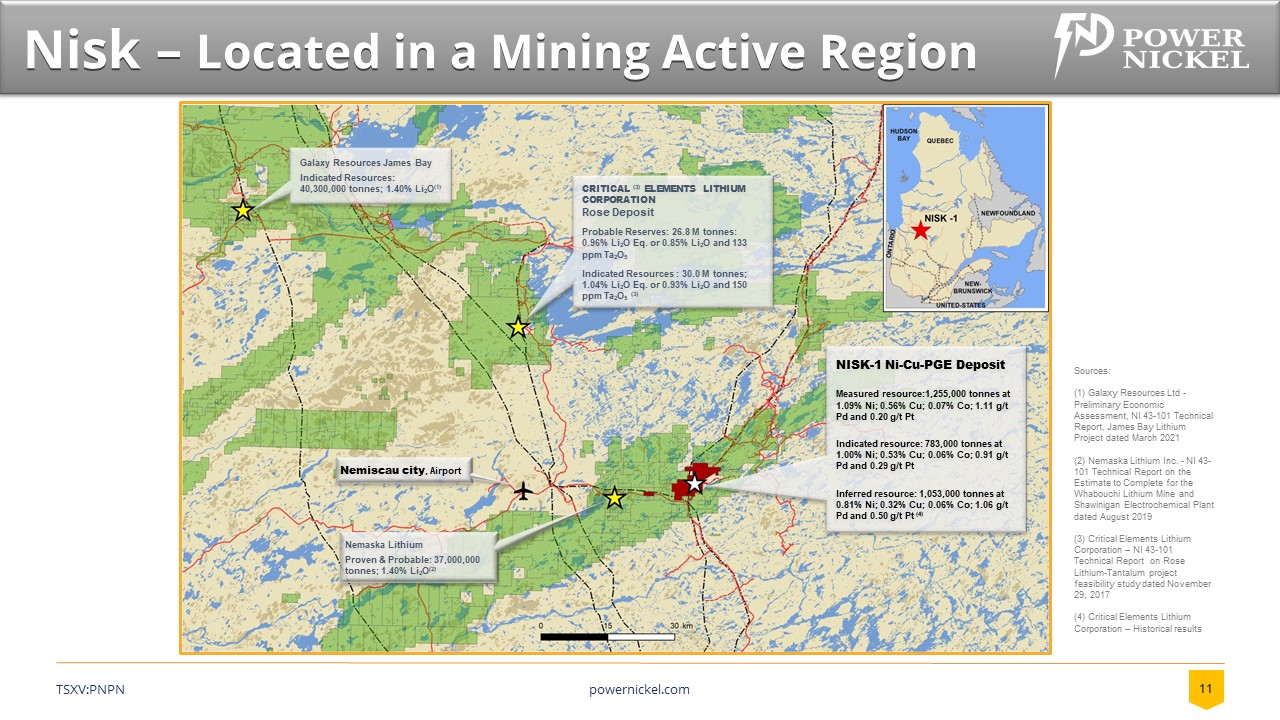 Nisk has historically had some very high-grade Nickel intercepts as shown below. The Grade-Thickness iso-contours are representative of the nickel distribution only. 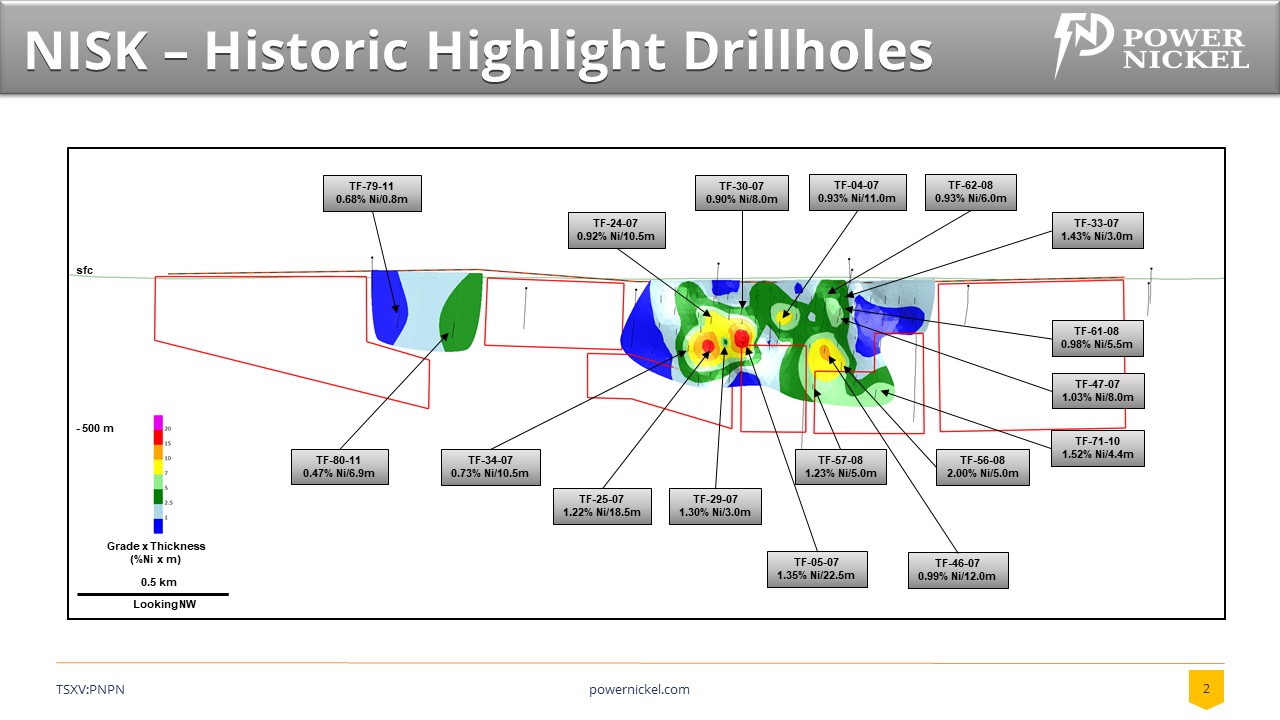 All samples were submitted to and analyzed at ALS Global ("ALS"), an independent commercial laboratory located in Val-d'Or, Québec for both the sample preparation and assaying. ALS is a commercial laboratory independent of Power Nickel with no interest in the Project. ALS is an ISO 9001 and 17025 certified and accredited laboratory. Samples submitted through ALS are run through standard preparation methods and analyzed using ME-ICP61a (33 element Suite; 0.4g sample; Intermediate Level Four Acid Digestion) and PGM-ICP27 (Pt, Pd, and Au; 30g fire assay and ICP-AES Finish) methods. ALS also undertake its own internal coarse and pulp duplicate analysis to ensure proper sample preparation and equipment calibration.

Power Nickel's QA/QC program includes the regular insertion of CRM standards, duplicates, and blanks into the sample stream with a stringent review of all results. Historic holes were assayed by various accredited laboratories.

On February 1, 2021, Power Nickel (then called Chilean Metals) completed the acquisition of its option to acquire up to 80% of the Nisk project from Critical Elements Lithium Corp. (CRE:TSXV)

Power Nickel (then called Chilean Metals) announced on June 8th, 2021 that an agreement has been made to complete the 100% acquisition of its Golden Ivan project in the heart of the Golden Triangle. The Golden Triangle has reported mineral resources (past production and current resources) in total of 67 million ounces of gold, 569 million ounces of silver and 27 billion pounds of copper. This property hosts two known mineral showings (gold ore and magee), and a portion of the past-producing Silverado mine, which was reportedly exploited between 1921 and 1939. These mineral showings are described to be Polymetallic veins that contain quantities of silver, lead, zinc, plus/minus gold, and plus/minus copper.

Power Nickel is 100-per-cent owner of five properties comprising over 50,000 acres strategically located in the prolific iron-oxide-copper-gold belt of northern Chile. It also owns a 3-per-cent NSR royalty interest on any future production from the Copaquire copper-molybdenum deposit, recently sold to a subsidiary of Teck resources Inc. Under the terms of the sale agreement, Teck has the right to acquire one-third of the 3-per-cent NSR for $3-million at any time. The Copaquire property borders Teck's producing Quebrada Blanca copper mine in Chile's first region.

Critical Elements aspires to become a large, responsible supplier of lithium to the flourishing electric vehicle and energy storage system industries. To this end, Critical Elements is advancing the wholly-owned, high-purity Rose lithium project in Quebec. Rose is the Corporation's first lithium project to be advanced within a land portfolio of over 700 square kilometers. In 2017, Critical Elements completed a feasibility study on Rose for the production of spodumene concentrate. The internal rate of return for the project is estimated at 34.9% after-tax, with a net present value estimated at C$726 million at an 8% discount rate. In Critical Elements' view, Quebec is strategically well-positioned for US and EU markets and boasts good infrastructure including a low-cost, low-carbon power grid featuring 93% hydroelectricity. The project has received approval from the Federal Minister of Environment and Climate Change on the recommendation of the Joint Assessment Committee, comprised of representatives from the Impact Assessment Agency of Canada and the Cree Nation Government; Critical Elements is working to obtain similar approval under the Quebec environmental assessment process. Critical Elements also has a good, formalized relationship with the Cree Nation.