From Rockets to MRIs - A Multi-Use Gas in Short Supply

Worldwide usable Helium is in short supply as demand is increasing, making it a high-priced commodity

Royal Helium aims to deliver a minimum of 1 trillion cubic feet (Tcf) of total inert gas into the market Via exploration and development of their entire land package in southern Saskatchewan in a combination of helium, nitrogen and some CO2

Royal Helium has a Discovery of one well have achieved almost half of their stated goal, 500, billion cubic feet of inert gas

Two additional production wells at Climax are being licensed and permitted

Royal will immediately begin drilling and exploration programs focused on accelerating the growth of the Company's helium resources.

The Company is currently budgeting for 7 new wells. 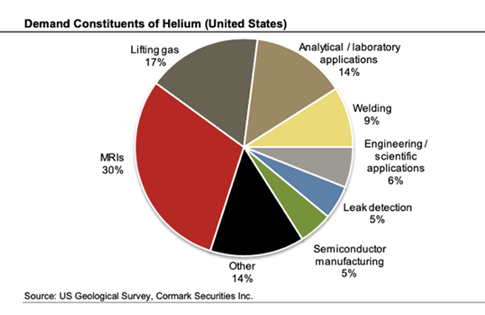 Helium is a non-substitutable and non-renewable commodity needed in many high-tech and health care industries, with specific applications in rocket engines, semiconductors, electronics, and health care.

At the Climax -3 well, Royal has discovered economic grades of helium over a contiguous 39 metre zone in the basal Deadwood Regolith zone.

The internal estimates of helium resource-in-place are:

Completed and production tested in sequence, the zone returned gas analyses including the following:

3rd  Stage: Permanent poly-generation facility that makes products from the CO2 and the N2 gases

Saskatchewan has a history of current and historic primary helium production. It is one of the few places on the planet where helium is produced with nitrogen rather than hydrocarbons. Saskatchewan has the potential to replace supply that is leaving the market

▪Existing infrastructure, information and personnel from a long history of oil and gas exploration and production 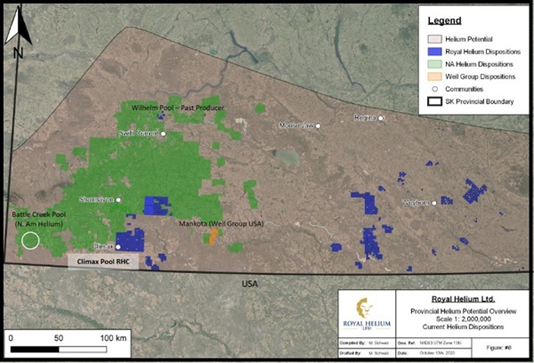 Royal Helium’s initial focus begins in two areas, Climax and Bengough, identified using a combination of seismic data, well logs and aeromagnetic surveys that narrowed down prospective areas to locate the source rocks for the helium enrichment (where the helium could be trapped and accumulated)

Royal Helium’s goal is to prove-up to 30 structures, targeting between 1.0 to 2.0 Tcf (Trillion cubic feet) of raw inert gas grading at least 1% Helium

Royal Helium Ltd. has successfully drilled Climax-2 to a total depth of 2,611m 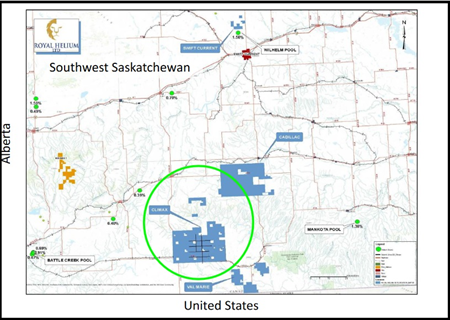 Consistent with Climax-1, the Climax-2 well was drilled into the Precambrian basement at the base of the Deadwood formation. The Deadwood is a sand and shale sequence that is known to produce helium in Saskatchewan. These first three wells are targeting different parts of the same large structural trap identified on the central portion of the Climax land block.

The seven drill targets at Climax were identified in late 2019 after the company first reprocessed 77.6 km of 2D seismic in conjunction with historic well logs and delineated a basement structure of ~3,094 hectares of four-way structural closure.

Another 17,676 hectares of helium permits (100% crown) located immediately west of its Climax property were then granted in November 2019.

To further define the possible inert gas/helium bearing formations and refine company target wells, a deep, detailed aeromagnetic survey was flown over the Climax central structure in May. 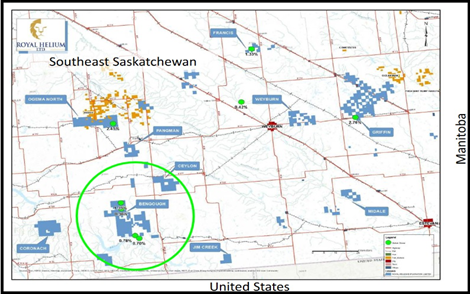 Royal has reprocessed 50.36 square km of 3-D seismic, which was acquired in 2017. The re-interpretation was completed to gain an understanding of regional basement structures and to identify potential drill targets. The 3D seismic shows a large regional feature with multiple closures.

-          Five (5) of these closures have been identified as initial drill targets and will be subject to further detailed investigation, including an airborne magnetometer survey.

Royal believes that the Bengough basement structure is part of a larger regional basement structural trend extending at least 60 miles north from the US border and passing through three of Royal's Focus Areas.

Royals southeast Saskatchewan lands, which comprise roughly 50% of the total land holding, show the potential for robust helium occurrences. With the strategy of full-cycle inert gas capture, refining and liquefaction, it is crucial to develop a large number of derisked drill targets throughout the Company's significant land package.

-          The initial five targets identified at Bengough is an exciting first step in the southeast, growing the initial target inventory to 12 when combined with the seven targets on the Climax project in southwestern Saskatchewan.

The SRC is Canada's second-largest research and technology organization. With more than 290 employees, $91-million in annual revenue and nearly 75 years of experience, SRC provides services and products to its 1,500 clients in 27 countries around the world.

Royal Helium Ltd. has initiated the engineering and scoping study for a large-scale industrial gas polygeneration facility located in Saskatchewan, which will be conducted by the Saskatchewan Research Council

-        The study is Royal's first step in determining the economic potential of a large-scale facility for the separation and monetization of the gas streams associated with helium production wells in Saskatchewan.

Royal is reviewing whether there is an opportunity to monetize the complete gas stream. Current economic analysis does not include credits for other potentially commercial gases produced and processed. While the economics of helium production are significant on their own, the impact of the commercialization of other gases could substantially add to net cash flow.