Welcome To The Tamerlane Ventures Inc HUB On AGORACOM

Vanadium: The Best Thing Since Lithium

Vanadium: The Best Thing Since Lithium

Poised to Take Over Battery Tech

The next series of planes commissioned by the Pentagon will not have pilots.

I learned this from a CEO who, because of his company's products, is constantly in talks with companies like Boeing, Raytheon, Lockheed, and the like.

“It's all about materials,” he said.

Every day, we're discovering not only new materials and compounds; but also abundant new uses for them.

Take the Nobel Prize in Physics, awarded last year for research on graphene — a one-atom-thick film of carbon that could hold the key to everything from massive data storage on tiny devices to flexible touch screens.

For the past few years, the market has been infatuated with materials.

Lithium companies ran (and continue to run) up thousands of percent:

And then rare earth metals took off:

Last week, I told you about beryllium. This week, I have another metal to tell you about — along with the one stock you need to own to profit from it.

And again, it's all about materials.

The Best Thing Since Lithium

Lithium was attractive because of its ability to improve battery storage. And that was enough to allow some investors to retire. But the high-tech industry is so over lithium.

It has many uses, but vanadium is best suited for batteries. Take a look at how it stacks up against lithium: 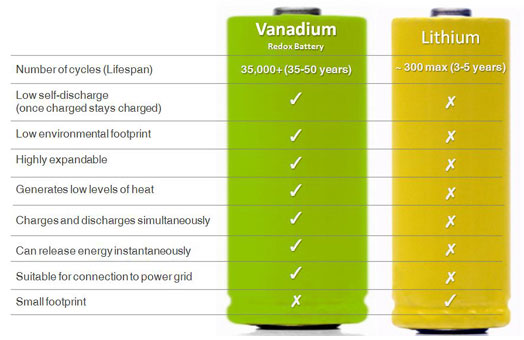 A lithium battery only lasts 3-5 years before it has to be replaced. A vanadium battery can be charged and discharged over 35,000 times, giving it a lifespan of over 35 years.

Vanadium can also charge and discharge simultaneously, can release energy instantly, and is ideal for both transportation grid applications.

In other words, it's the new holy grail of battery materials.

Look at what industry insiders are saying:

Without a doubt, vanadium is growing into one of the world's most important metals about which no one has ever heard.

Companies are wasting no time embracing the technology.

Japan's GS Yuasa (XETRA: G9y), who sells $3.4 billion worth of batteries annually, is already developing a vanadium battery, saying, "The addition of vanadium not only improves the performance output by 20% and the safety of the batteries; but also potentially lowers their costs compared with a battery using lithium iron phosphate."

The Buffett-backed BYD Company (PK: BYDDF) is also working on a vanadium battery for its electric vehicles.

Subaru's new G4e is also powered by a vanadium battery.

And it's best uses will be for the grid...

Prudent Energy already has a vanadium system attached to a solar installation in Italy and is working on one in California.

Cellstrom — a subsidiary of Germany's Gildemeister (XETRA: GIL) — is working on a Bloom Box-like device with vanadium as the prime material.

Its uses are growing so fast that Terry Perles, former director of global vanadium marketing at Evraz Group, has stated:

The vanadium redox flow battery could lead to an explosive new demand for vanadium. Therefore, it is critical for the vanadium industry to recognize the growing demand resulting from vanadium-based battery systems.

And there's one company about to bring significant new production online...

Go to the Source

Vanadium demand for batteries is expected to grow 30% in the next three years. And supply is already struggling to keep up. In fact demand is expected to outpace it by next year.

This is because up to 90% of the vanadium on the market isn't suitable for batteries. It comes from ferrovanadium, and is only suitable as strengthening alloy for steel.

The good stuff comes from vanadium pentoxide... and only a few companies have access to it.

Lithium and rare earths are the same way. Only certain types are suitable for use. I showed you the performance of some of the companies that have access to the usable kinds in the charts above.

One of the companies with access to vanadium pentoxide is Energizer Resources (OTCBB: ENZR).

The company 100% owns a very large vanadium pentoxide resource in Madagascar. It has the support of the local government, infrastructure being built by a local thermal coal project, and is already in negotiations with steel and battery producers.

As vanadium demand grows, Energizer Resources could benefit as it brings its resource online. And so could its shareholders.

If you missed the lithium and rare earth booms, this may be your chance to get in on the next materials bull market.