Welcome To The Trillogy Metals HUB On AGORACOM

Ringer
Rank: President [?]
Points: 16773 [?]
Votes: 73 Score: 3.7 [?]
Your Vote:
Please Log In to Vote
Follow
Did you know? You can earn activity points by filling your profile with information about yourself (what city you live in, your favorite team, blogs etc.) 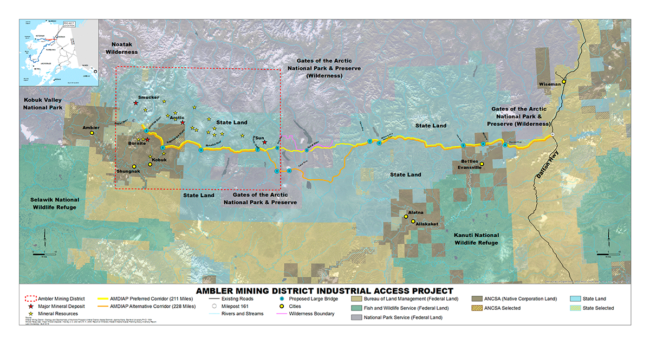 The window for public comment on a controversial road comes to a close this week. The Ambler Mining District Industrial Access Project — or Ambler Road — would start at the Dalton highway and stretch over 200 miles west.

That’s a big road in a state with not that many of them. Proponents say it will enable growth of the mining industry, and create jobs. Detractors worry about impacts to subsistence and the environment.

The road itself is an idea that’s been kicking around for decades. But it picked up steam back in 2011. At that time, the price of oil was high, the state had cash, and then-Governor Sean Parnell wanted to put some of that money toward encouraging natural resource development in parts of the state that were off the road system.

Ambler Road was part of that push. It’s an area that has been explored for its rich mineral potential since the 1950s, but hasn’t been developed because of its remoteness.

“You can’t develop the Ambler Mining District without a road,” Rick Van Nieuwenhuyse, President and CEO of Trilogy Metals, said.

Van Nieuwenhuyse’s company is currently exploring two copper deposits tucked into the southern part of the Brooks Range. He says that without a road, there just isn’t an economical way to get the minerals to market if they do decide to start mining there.

“We’ve looked at this very seriously. Looking at using aircraft and even airships that aren’t in commercial use, but are in planning stages. We’ve dialogued with Lockheed… and the math just doesn’t work,” Van Nieuwenhuyse said.

The state’s proposed solution to this access problem is a private industrial road, 211 miles long, running from east to west along the south side of the Brooks Range. Picture a road that starts in the heart of Alaska’s interior and makes a beeline for the Chukchi Sea and Kotzebue, stopping near a group of Kobuk River villages.

Wilmer Beetus is First Chief of Hughes, one of the villages close to the east end of the proposed road. He says that residents in Hughes support the project, because they believe it will translate to construction and mining jobs.

“Right now we’re in a deficit we’ve been in the last couple years and it really hurts the economy around here. It’s not an easy life living out there, especially when there are no jobs,” Beetus said.

But other residents in the area are opposed. Vanessa Edwards is Acting Tribal Administrator of Alatna, another community close to the proposed route. She says the benefits that might come from a road don’t compare to the potential damage the project could do to important subsistence resources.

“That Ambler mining road would cross two rivers that would directly affect us, that’s the Koyukuk and the Alatna rivers. That’s where sheefish and whitefish go to spawn,” Edwards said.

There are also concerns about how the road might affect the caribou population. Cyrus Harris lives in Kotzebue and is the Vice-Chair of the Western Arctic Caribou Herd Working Group. At a meeting of that group earlier this winter, he expressed worry over how the project might affect a critical resource for his community.

“Caribou is our main source of meat back home. Unlike beef and so forth that urban folks depend on, well, we depend on the land, the land being our garden. And that’s how we’re raised from time immemorial,” Harris said.

All of these sentiments are currently being collected by the Bureau of Land Management. The agency will use those public comments in its assessment of the impacts of the project, including economic, environmental and subsistence impacts.

Tim La Marr is overseeing the process for BLM. He says that analysis will be done by a team of professionals including wildlife biologists, engineers, hydrologists, fisheries biologists, as well as a sociologist and economist.

Ultimately the agency will have to decide whether or not to grant a permit to build the road through federal land, and if so, what the requirements will be to mitigate the environmental impact.

BLM could deny that permit, but La Marr says in his experience, that’s pretty rare.

The National Park Service is also conducting a separate but parallel analysis of the section of the road that crosses Gates of the Arctic National Preserve. The Alaska National Interest Lands Conservation Act, which established the Preserve, included a provision that if there was ever a transportation system built to the Ambler Mining District, NPS would have to accommodate it.

“The Park Service I suppose you could say wasn’t given the opportunity to say no,” Greg Dudgeon, Superintendent of Gates of the Arctic National Park and Preserve, said. “Rather it was where the road would go such that it would be least impactive to park purposes, and the terms and conditions for how the road would be used.”

The state agency leading the Ambler Road project — the Alaska Industrial Development and Export Authority, or AIDEA — estimates that it could cost up to $380 million to build. The agency expects to finance that price tag through a mix of private capital, bonding and tolls.

It’s not yet a done deal that the environmental review process will be completed — so far AIDEA has only paid for the scoping and some of the analysis that happens directly afterward. An AIDEA spokesperson said that once the scoping is complete, the AIDEA board will decide the next step.

The public comment period is open through Wednesday, January 31st.