Welcome To The Usec Inc HUB On AGORACOM 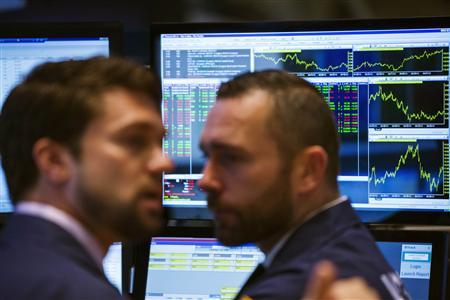 1 of 9. Traders work on the floor of the New York Stock Exchange shortly after the markets opening in New York, July 22, 2013.

Investors' mood was also helped by a pledge from the Group of 20 on Saturday to put growth before austerity, seeking to revive a global economy that the bloc described as "too weak.

The yen rebounded after an initial dip in Tokyo, but many traders viewed the bounce as temporary in view of Abe's upper house election win on Sunday.

However, disappointing earnings from McDonald's (MCD.N) mitigated the upbeat mood for equities as the U.S. fast-food giant posted weaker-than-expected results.

"McDonald's (earnings) headlines were a little weak, but I think we are still in the strong start of the earnings season," said Ryan Detrick, senior technical strategist at Schaeffer's Investment Research in Cincinnati, Ohio.

Both the S&P 500 and the Dow hit all-time highs last week following a moderate pullback of fears that the Federal Reserve might reduce its bond-purchase stimulus later this year if the economy improves further.

The yen bounced back after an initial dip in Tokyo trading on some dollar selling by Japanese investors, which in turn triggered stop-loss selling in thin summer conditions.

"Japanese portfolio outflows is what will drive the yen lower in coming months. ... Confidence from this victory can be constructive but these outflows will be a slow-moving process," said Ned Rumpeltin, head of G-10 FX strategy at Standard Chartered Bank in London.

The dollar index .DXY was 0.48 percent lower at 82.207, slipping further away from a three-year high set earlier this month.

Commodities were mostly firmer thanks to the softer dollar.

Spot gold recorded its biggest-single day gain in more than a year to its highest level in a month. It last traded up almost 3 percent at $1,334.36 an ounce. <GOL/>