New drill targets have been identified by using a three-dimensional Leapfrog model and are designed to test potential extensions to high-grade gold and silver zones intersected by previous drilling. Some of the higher grades were found in several veins with overlying lower-grade disseminated gold near the Mexico-Esperanza mines border area of the San Rafael vein.

The Mexico-Esperanza high-grade intersections at the El Oro project include:

The Full Potential of the San Rafael Vein has Never Been Properly Investigated. 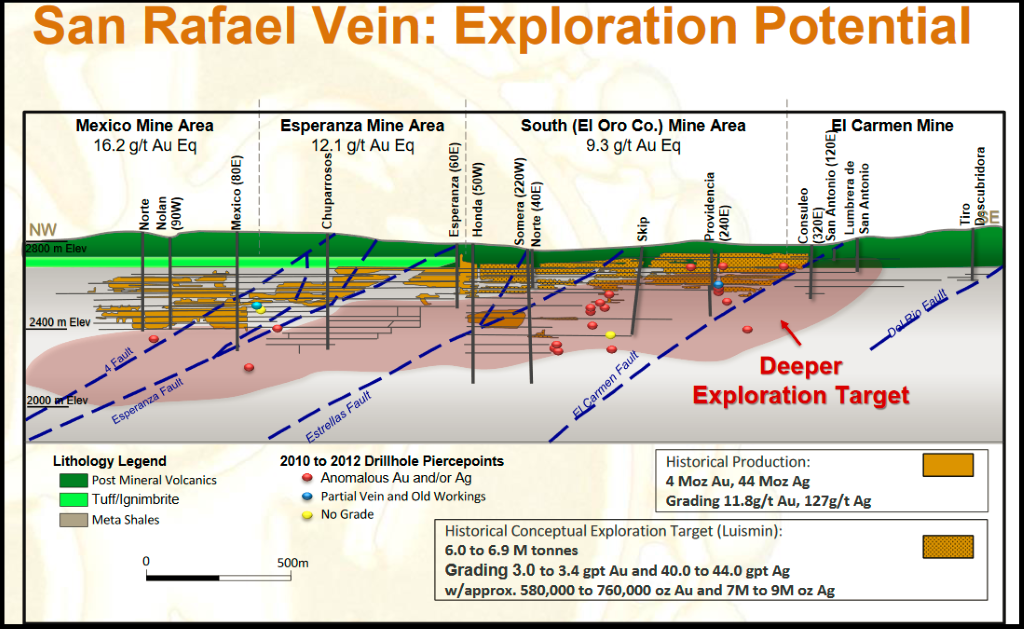 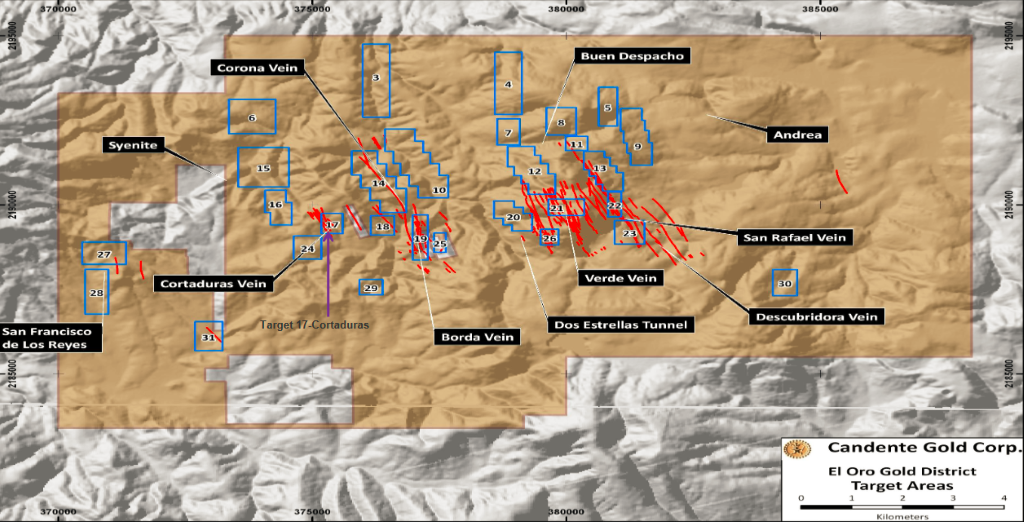 Memorandum of Understanding with Magellan Acquisition Corp. which gives Xali Gold the right to earn up to a 100% interest in both the San Dieguito de Arriba beneficiation mill ("SDA plant") and the El Dorado property in Nayarit State, Mexico.

The SDA plant is a central element in Candente's growth strategy to provide production revenue and a stable operational base for the company.

The plant has the capacity to treat up to 200 tpd of material via a flotation circuit.

The SDA plant was operational from 2007 (by Minerales Vane S.A. de C.V.) until April 2017, processing ore from various operators in the region on a toll and partnership basis.

Magellan acquired the SDA plant from Rose Petroleum in November 2017 through the purchase of its subsidiary, Minerales Vane, for a value of $1.5M ($1M cash plus shares).

Magellan only operated the plant in February 2019 when processing a bulk sample of approximately 600 tons for a tolling opportunity.

Magellan entered an option agreement on the El Dorado property in August of 2018, with Ingenieros Mineros, S.A. de C.V. ("IMSA") and modified the agreement January 15, 2020. IMSA retains a negotiable NSR of 3.5% and Magellan is obligated to either perform US$20,000 of work on the property in 2020 and $25,000 in 2021 or make payments of US$5,000 per quarter. Under the Definitive Option Agreement with Magellan, Candente Gold would assume these obligations.

The El Dorado Property is viewed as a high priority source for mill feed given historical production, high grade gold and silver mineralization, proximity to the SDA plant and the Company's path to full ownership of both.

The principal vein system is the El Dorado epithermal vein trend which has been traced over a strike length of 3.5 kilometers. This structure hosts multiple mineralized zones including high-grade, and lower-grade bulk tonnage stockwork zones extending over tens of meters in width in both the hanging wall and footwall of the vein system.

The El Dorado vein system was explored and drilled by Prospero Silver in 2010-2011 with a total of 4,950 meters drilled in 28 diamond core holes.  The drilling was reported to have intersected multiple steeply-dipping silicified mineralized zones extending from near-surface to a drilled depth of 150 meters.

Xali's flagship asset (since 2007) is El Oro, a district scale gold project encompassing a well-known prolific high-grade gold dominant silver epithermal vein system in Mexico.  The project covers 20 veins with past production and more than 57 veins in total, from which approximately 6.4 million ounces of gold and 74 million ounces of silver were reported to have been produced from just two of these veins (Ref. Mexico Geological Service Bulletin No. 37, Mining of the El Oro and Tlapujahua Districts. 1920, T. Flores*)

One of the most productive veins, the San Rafael Vein, historically produced over 4 million ounces of gold and 44 million ounces of silver from the upper 150 to 250 metre mine levels.  Mine grades averaged 10 to 12 grams per tonne ("g/t") gold and 120 to 160 g/t silver over average widths of 3 to 10 metres.  High grade bonanza shoots in San Rafael graded up to 50 g/t gold and 500 g/t silver, and in some places the vein is over 70m wide.  Many of the El Oro district's veins hold significant discovery potential, particularly below the historic workings of San Rafael, which was mined to an average depth of only 200 metres before being shut down in the 1920s due to flooding and the low price of gold.

Much of the waste material from historic mining activities was re-introduced to the mines as backfill with a grade that would not be considered waste by modern standards.  The Company will be undertaking an evaluation of the potential to economically recover and process the backfill material.  In addition to potential economic benefits of processing the backfill, the exercise could serve to open up historic workings to more efficiently access and explore the El Oro District veins below the level of historic workings.

Modern understanding of epithermal vein systems indicates that several of the El Oro district's veins hold excellent discovery potential, particularly below and adjacent to the historic workings of the San Rafael Vein, which was mined to an average depth of only 200 metres.

Candente Gold's subsidiary, CCM El Oro Jales, has an agreement with the municipality of El Oro which provides the Company the right to recover all available gold and silver from the tailings deposit and pay to the Municipality of El Oro an 8% Net Profits Interest ("NPI").