Highgrader
Rank: President [?]
Points: 24074 [?]
Votes: 176 Score: 3.9 [?]
Your Vote:
Please Log In to Vote
Follow
Did you know? You can earn activity points by filling your profile with information about yourself (what city you live in, your favorite team, blogs etc.)

After a Downward Revision, Buenaventura Back to a Buy

Research by IIR Group, sets a new price target for Buenaventura (NYSE: BVN) at US$17.39 per ADR, maintaining a BUY after a downward revision from the September target of US$35.48. The analysis estimates Net Earnings for 2008 through 2010 at US$667, US$299 and US$409 million, and uses target ratios EV/EBITDA and Price/Sales at 12.0x and 6.0x respectively, when arriving at the US$17.39 price target. EV/EBITDA and Price/Sales target ratios were 20.0x and 12.0x in the September analysis, but were adjusted down to reflect the 'downturn in the commodity cycle and global economic growth.'

Accumulated investments related to the Uchucchacua project’s deepening and integration of Carmen and Socorro mines was reported at US$10.3 million at the end of 3Q’08, and will be completed in 1Q’09.

In addition, expansion of the plant, from 2.500 to 3.000 STPD, has been completed, and operations began in September.

At Orcopampa, the construction of ramps 15 and 16, which includes 720 meters of drifting, was reported as 91% complete, with US$3.5 million in investment.

The construction of facilities to permit recovery of approximately 53.000 ounces of gold in 2008 and 2009 was completed in August. Accumulated investment was US$10.9 million.

The ADR has found technical support at 15.0, and is testing resistance at the long-term trend channel. Money Flow indicators are inconclusive (RSI ~50). If the recent Dollar strength is to continue, expect this to reflect negatively on the gold price, and in turn BVN.

A bullish break-out above 16.5 would signal a test of resistance at the November 28 close at 18.0. 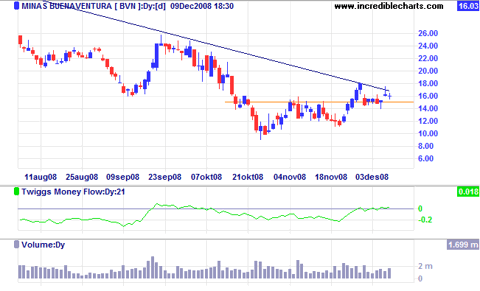