Hub Navigation
Message: The Future Of Banking: Is It All Bitcoin And Blockchain?
Reply New Message
Prev Message Back To Forum Threaded View Next Message

The Future Of Banking: Is It All Bitcoin And Blockchain? 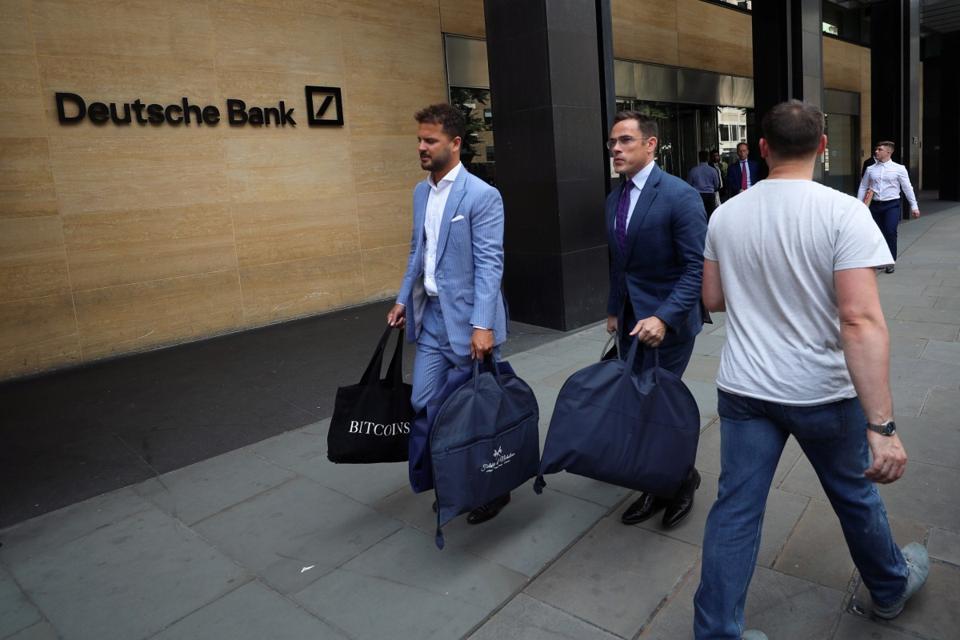 At the beginning of July, news broke of Deutsche Bank staff being sent home as 18,000 job cuts began unraveling before our very eyes. This news was brought to life with an iconic image of two suited men carrying their possessions past the doors of a Deutsche Bank branch in London along with a bag branded "Bitcoins."

Unfortunately, that image turned out only to be an incredible piece of timing and coincidence as the men were not now out-of-work bankers hoofing it from their formal institutional workplace brandishing the 'future of money,' on their bags, instead they were tailors walking past at the right time.

Still, that near-perfect latent image of the finance's future did spark a few questions in my mind, and the minds of others. Just how far are we from a future predicated on Bitcoin and blockchain in banking?

The beginning of the end for banks

To answer this question, I had to look at what is happening in the world of banking that has led to job cuts and the concerns for the traditional way of doing things in finance. Living in the United Kingdom, London is a historical hotspot for banking and the seat of power for some of the world's biggest banks.

However, beyond the high-rise glass structures in the city center, there are signs - usually in the tube stations and bus stops - of a new way of managing and controlling your money on a day to day basis. No, it is not Bitcoin - yet - it is the challenger banks.

Challenger banks, as defined, are: "Small, recently-created retail banks in the United Kingdom that compete directly with the longer-established banks in the country, sometimes by specializing in areas underserved by the "big four" banks."

These banks, also called App-banks, are usually highly customer focused and made to be as user-friendly and as easy to operate on a day to day basis as they can. In comparison with traditional banks, challenger banks try and play to general user frustrations from your big institutional banks. Sound familiar?

I spoke with Anne Boden, a banking doyen with 30 years experience in some of the most important financial institutions in the world, and now the founder and CEO of Starling Bank - one such challenger bank in the UK.

Talking to her about the future of banking was fascinating for although Boden is aware of Bitcoin, blockchain, and its potential it has in the banking sector, she believes its time is still far on the horizon.

In her recently released book, "The Money Revolution" Boden states: "[Blockchain] is easily the most revolutionary money change on the horizon and may make a huge difference across the fintech sector." 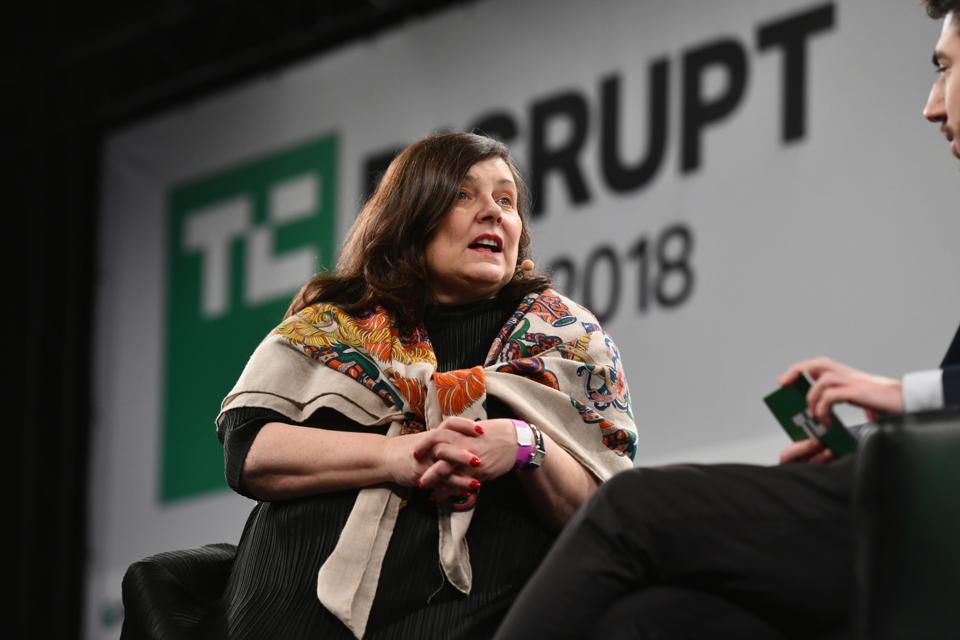 Her thoughts on how traditional banks will need to change and evolve because of several different factors could easily be viewed in the same way, but with blockchain and cryptocurrency-tinted glasses

"I spent 30-odd years in traditional banking, I worked for all the big banks, I worked for Lloyds Bank, Standard Chartered, UBS, Zurich, and RBS. Then I went into AIG, post-financial crisis, to do the turn-around and I came to the conclusion that it was easier to start a new bank than to fix the old," Boden told me.

Indeed, the banking legacy and way of doing things has become so stagnant that the wants of the banks and the needs of the customers almost do not line up anymore - especially on a day to day basis. Challenger banks are this fresh start customers have been baying for, but in comparison, cryptocurrencies and blockchain could be an entirely fresh system.

"In this era, it is people like Atom, Monzo, and Starling that have come to market, and the ones that have been successful are the ones that have built their own technology," Boden added. "All these organizations have been called challenger banks, but you can only really disrupt when you have a current account - because people are using that every day - and when you have your own technology."

Again, Boden is not necessarily referring to that technology as being blockchain; however, one can see how blockchain is a prime example of disruptive technology for the banking sector. The world is changing, and the way people do everything is different, and this is also down to technology.

"Customers have changed. Customers are buying music differently; they are shopping on Amazon; they are doing things very differently," said Boden. "Technology has changed. Everyone is wandering around with their smartphones, these phones have better penetration than the laptop, and then all the time the regulations are changing as well, and that is a perfect storm to bring something like Starling to the market."

Starling is one of several challenger banks that are succeeding at disrupting the banking hegemony with their customer focus, their everyday usability, and their own technologies. Their success is indeed a challenge to institutional financial systems, but because this is a fast-moving space, there are already challengers to the challenger banks.

A new weapon in the arsenal

Challenger banks, App-banks, mobile payment companies, merchant services aggregator, peer-to-peer payments companies, are all financial services that are looking to take a piece of the pie that traditional banks have held for so long - and it is not just a UK phenomenon.

Circle, Square, and even Revolut, which is coming to the USA are also disruptive forces in the financial space, but what they all have in common is a cryptocurrency offering. Cryptocurrency may be a long way off from being as popular as the Pound or the Dollar in regards to payments, but some of these companies are still offering the chance to use this alternative payment method, should you be so inclined.

This took me to the offices of two other App-banks in the UK, Wirex, and Zeux. Both companies operate as an alternative banking solution, allowing for payments and money transfers, but they also each have cryptocurrency offerings as well.

These offerings are of course not going to be nearly as popular as the general fiat services of Starling, for example, but they are not supposed to be - as yet.

"App-banks, or digital banks, are making things more convenient for everyday customers to manage their banking, "Frank Zhou, CEO of Zeux, told me. "There are a lot of needs in the early adopter space who are interested in cryptocurrency, from trading, investing, using it for payments. Those types of customers are easier to reach as they follow the newest developments and are willing to give it a try,"

Pavel Matveev, one of the founders at Wirex, explained that the use of cryptocurrencies need not only be for experimenting though. There are tangible use-cases within the payment sphere already.

"While App-based and digital banks offer a more convenient means of managing money, they are still largely based on conventional payment infrastructure. This means that cross-border payments still take 3-5 days to settle and command relatively high fees," said Matveev

"Decentralised digital currencies have the potential to revolutionize many aspects of the payments industry due to their transparency, mobility, and ease-of-use,"  added Dmitry Lazarichev, also of Wirex. "One of the most significant areas is international remittance. Cross-border crypto transactions are significantly faster than conventional methods of transferring money abroad and require very little in the way of fees and charges."

What Matveev and Lazarichev, as well as Zhou,  had to say about including cryptocurrencies into the new era of banking, reminded me of Boden's view for the future of the industry. The hopes of the two crypto-offering App-banks is that they can fill small niches for people with this new technology, and for Boden, the view is that traditional banks will face stiff competition in these small niches of finance services.

"What is going to happen is other things happening in the environment will catch up with the banking industry, they will surprise the banking industry," said Boden "The combination of 5G internet of things, self-driving cars, AI and machine learning will change the profile of how payments are made."

"So I think that the nature of payments will change and you will get new entrants providing some of those new payment mechanisms, and I think in that environment the incumbent banks will find it harder to compete. Some will survive and mutate to something relevant, and many of them will die."

If cryptocurrency is to become one of those new payment mechanisms, getting an early foot in the door is vital, but even more important is offering a service that is usable. Zeux may see this as using cryptocurrency for general payments, while Wirex could believe remittances are key for the digital currencies; neither is more right than the other and perhaps that is the point - there will be a bevy of offerings in the future.

"Like previous studies of mass adoption, it happens when the majority can use it as easily as they would use it normally. For example, from cash to PIN card, Pin card to contactless cards, contactless to mobile payment. An easy-to-use experience is key to bringing adoption," said  Zhou.

"I think the market is ready for crypto mass adoption. But, there needs to be a solution before the mass demand surfaces. Once all the customers know they can spend their cryptos easily everywhere in any shops, it increases their willingness to accept cryptos as payment in the first place. Mass adoption only happens after the solution appears, not before."

The banking world has, for almost the last century, continued in pretty much the same way with little to no threat from alternatives. That is all changing. People would like to believe that the power of blockchain in the financial system, and the option of cryptocurrencies, are about to shake up the entire banking space, but they would be wrong.

There is little doubt that banking will start to incorporate blockchain, as Boden explains: "I think that blockchain is likely to be used in certain aspects of the banking business, so probably for trade finance where you have lots of parties collaborating on a transaction, but I think you will see blockchain implementation in niche areas of the business, you won't see it as a wholesale change for the banking platform."

However, for an entire, legacy-based industry of such a traditional magnitude to overhaul its entire system for a nascent technology is foolhardy.

In saying that, cryptocurrencies will start to gain more mass appeal. This does not mean these two sides of the same industry will be what changes the face of banking. Still, the face of banking is changing, and that is why traditional banks that are oblivious to this are starting to show cracks.

Everyday usage of money and payments is already on the march, and because of the needs of customers, there is an emerging market of challenger banks, app-banks, financial institutions and payment facilitators in the wings. Some are already offering blockchain and crypto services, some may do so down the line, but to say that the only way to the future of banking is with blockchain and crypto is short-sighted - there are much bigger demands and many more niches to be filled.