Hub Navigation
Message: Industry Bulletin: Why The Gold Rally May Be Different This Time
Reply New Message
Prev Message Back To Forum Threaded View Next Message

Industry Bulletin: Why The Gold Rally May Be Different This Time

“It’s different this time.” How many times have I heard that phrase uttered when it comes to investing? Rampant IPO speculation won’t turn out poorly in the end? Sure it will. Consumers can spend more and more without having to pay the proverbial piper at some point? Don’t believe it.

OK, all joking aside, I think I have spotted one investment trend that may actually turn out differently this time. Specifically, the recent resurgence in the price of gold. Here is a chart of gold going back to 1990. It is accompanied by the yield of the 10-year U.S. Treasury Bond. And, that is where I see the potential for something different. 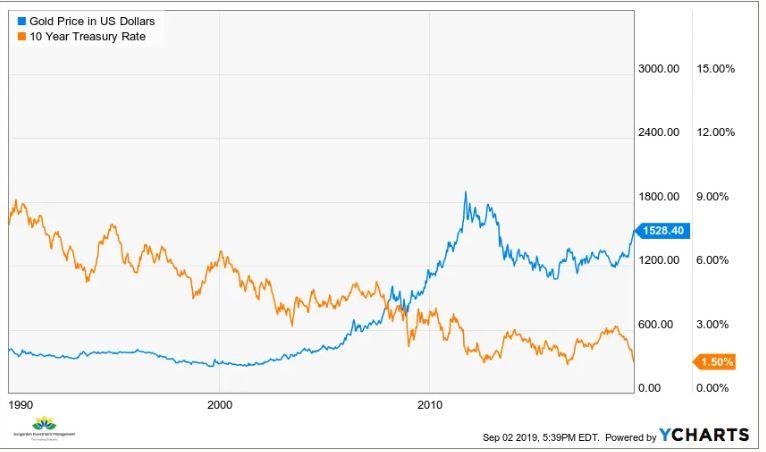 What yields less than zero?

You probably have to be an investment geek (like me) to realize that there is an unprecedented thing happening right now in the global market for government bonds. Specifically, an overwhelming number of bonds issued by governments in Europe, Asia and soon perhaps, the U.S., have negative yields. In other words, the return you will get on a bond you buy today and hold until it matures will be less than zero. Not maybe. Not probably. Definitely.

You see, not everyone buys bond to hold them. The bond market, which is vastly larger than the stock market, is full of different types of investors. Some, such as pension funds, may be forced by their mandates to buy government bonds with some of their portfolio assets. It doesn’t matter what the yield is.

Other investors are bond traders. They buy bonds to try to make a profit. That means that their goal is to buy the bond at a higher yield than when they sell it. They care mostly about the yield falling, not about the interest they earn. And, as long as they can sell the bond to someone else later, they are willing to buy it at what might seem to you and me to be a very low yield today.

This chart shows that gold and bonds both rallied by about the same amount in August. Both advanced more than 8%. Importantly, it brought that 10-year U.S. Treasury rate down to 1.50%. 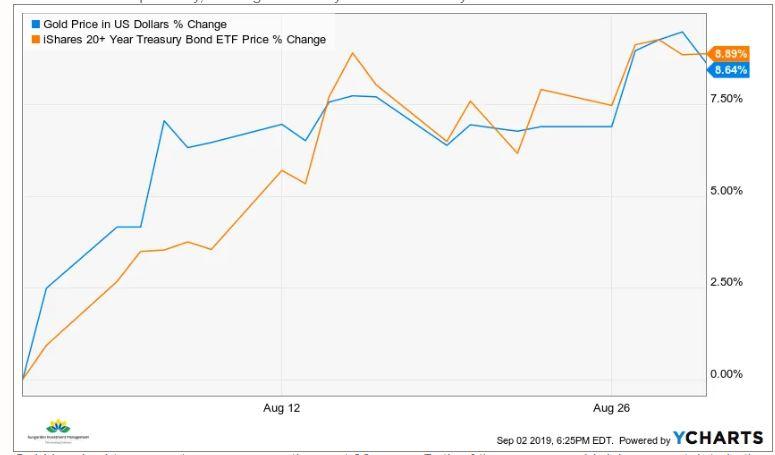 Gold has had two monster moves over the past 30 years. Both of them came amid rising uncertainty in the economy and stock market. However, 10-year Treasury yields were closer to 4% or 5%, not less than half that, as they are today.

To me, THIS is what is different this time. You see, one of the big arguments against gold is that it does not have a yield. It pays no interest, because it is not a business, and it is not an obligation issued by a government. It’s a commodity.

So, as in times of panic, it was easy for investors to choose bonds over gold. After all, wouldn’t you always like to get some interest on your money while you wait for your (and/or the market’s) panic to subside? This time, however, the yield on bonds is so close to that of gold (zero) that I suspect investors will look at it differently. They will want to allocate their “fear” money to where there is some profit potential.

After all, the stock market has been a dud since early 2018. It has been volatile, but the net return of all of that excitement has been very little if any. So, it won’t take much of a rally in something like gold to make it a popular holding for a while.

I currently own positions in gold and U.S. Treasuries through ETFs, as part of an overall portfolio. For now, they are both adding value for investors. Going forward, they could both continue higher for a while, or fall flat on their face if conditions and sentiment change. But I don’t think you can ignore that when it comes to gold and bonds, that small difference in yield this time around makes the analysis of the two more intriguing than in the past.