Supplier of Magic Truffles to the Legal, Recreational Adult Use Market in the Netherlands

Phase 2 of Building out their Production Facility in the Netherlands

Toronto, Ontario--(Newsfile Corp. - July 20, 2020) - Red Light Holland Corp. ("Red Light Holland" or the "Company") (CSE:TRIP) (Frankfurt:4YX), an Ontario-based corporation positioning itself to engage in the production, growth and sale of a premium brand of magic truffles to the legal, recreational market within the Netherlands, is pleased to announce that it has placed an initial order (the "Initial Order") for 10,000 units of its previously-unveiled psychedelic truffles microdosing packs ("Microdosing Packs") with McSmart (as defined in the Company's Listing Statement), an independent and established third party producer, wholesaler, and distributor of truffles within the Netherlands. The Microdosing Packs, which will be supplied, produced, and packaged by McSmart under the Red Light Holland brand, are expected to be offered for sale within the Netherlands as early as September 2020, through three Smart Shops operated by McSmart, as well as through Red Light Holland's proposed e-commerce platform and McSmart's current e-commerce platform. 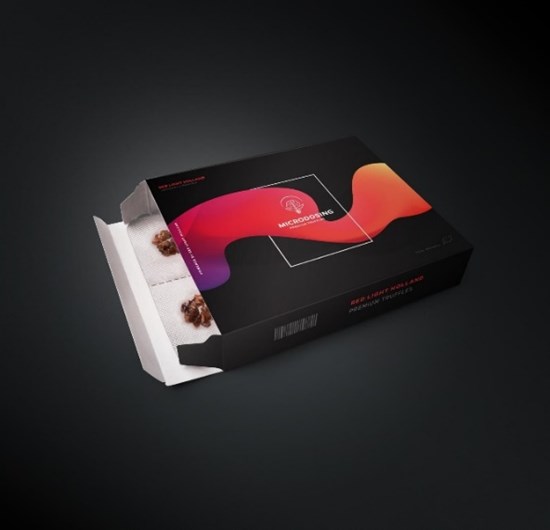 "We are extraordinarily proud, at Red Light Holland, to be able to sell legal Microdosing Packs responsibly- with an anticipated release in the first week of September 2020 to the Netherlands market. As well, we are very excited to work alongside McSmart, one of Netherlands most respected companies in this sector. Red Light Holland continues to take crucial steps towards being able to deliver its products at a rapid pace and our path to generating revenues has truly begun! Real revenues, real people, and real proud!", said Todd Shapiro, Chief Executive Officer and Director of the Company.

The Initial Order is the first major order from Red Light Holland for Microdosing Packs to be supplied, produced and packaged by McSmart. The Company intends to continue to assess market demand and project sales performance within the Netherlands on an ongoing basis as current economic conditions evolve.

The Company is an Ontario-based corporation positioning itself to engage in the production, growth and sale (through existing Smart Shops operators and an advanced e-commerce platform) of a premium brand of magic truffles to the legal, recreational market within the Netherlands, in accordance with the highest standards, in compliance with all applicable laws.

For additional information on the Company: