American Creek Resources Ltd. (TSXV: AMK) (OTC PINK: ACKRF) ("the Corporation") is pleased to announce their JV partner Tudor Gold has commenced Phase l of the 2022 exploration program (the "Program") at their flagship property, Treaty Creek, located in the heart of the Golden Triangle of Northwestern British Columbia. The fully funded Program consists of a 30,000 metre (m) diamond drilling campaign that has been developed to systematically test the extension of the Goldstorm Deposit well beyond the limits that were outlined in the 2021 Mineral Resource Estimate (American Creek press release dated March 9, 2021 reported a Measured and Indicated Mineral Resource of 19.41 million ounces of AuEq grading 0.74 g/t AuEq and an Inferred Mineral Resource of 7.9 million ounces of AuEq grading 0.79 g/t AuEq). In addition, exploration diamond drilling will focus on the Calm Before the Storm (CBS) and Eureka zones (EZ).

The 2021 exploration drilling campaign successfully infilled key areas of Tudor's 2021 Mineral Resource with reported gold and copper grades that were exceptionally higher than grades reported in the 2021 Mineral Resource Estimate. Tudor's 2022 exploration program will test the Goldstorm System for an additional 500 metres along the northeastern axis. (see Goldstorm Phase l Drill Program, plan map). The primary goal of the Program is to expand the size of the initial mineral resource and to define the limits of the mineralized domains.

Ken Konkin, President and CEO, comments "This year we have planned a very robust drilling campaign that will focus 80% of the exploration as continued step-out drilling from the latest impressive 2021 results obtained from holes GS-21-113, GS-21-113-W1, GS-21-113-W2 and GS-21-119 in the northern sector of the Goldstorm Deposit (Table 1). The remaining 20% of planned holes will include Goldstorm resource definition drilling as well as exploration drill holes for CBS and Eureka gold systems. Our exceptional start-up team as done a superb job safely dealing with challenging conditions to mobilize drills and supplies utilizing the Brucejack Lake road to access our winter-haul route. We wish to thank Newcrest Mining for their assistance in allowing us to share the Brucejack access road so we could complete the mobilization of our equipment in a timely and cost-efficient manner. Our Phase ll plans will be contingent to the success of the Phase l drilling; we plan to concentrate our drilling in the areas that contain the strongest mineralization throughout the 300H, CS-600 and DS-5 domains. We also plan to test the hypothesis that the Eureka Zone may be the continuation of the DS-5 domain. The Goldstorm Deposit continues to amaze our geological team as it remains open in all directions and to depth with some of the most impressive and strongest gold-copper mineralization obtained late last year within the northern areas of this deposit."

Darren Blaney, Chief Executive Officer of American Creek, stated: "We are obviously very pleased and excited to see the commencement of the much anticipated 2022 Treaty Creek exploration program. We have high expectations as to what this program will accomplish in not only significantly expanding the existing gold resource, but also in the very high probability of further significant new discoveries. 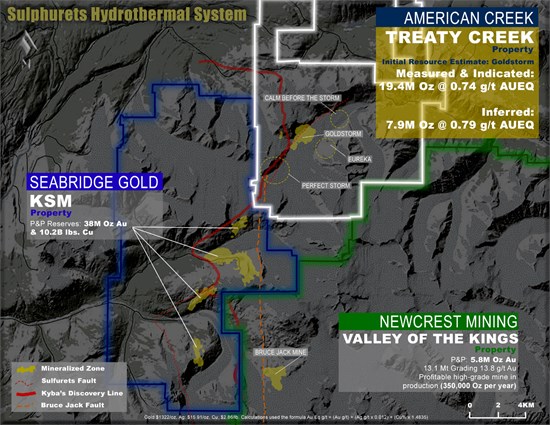 The Qualified Person for Tudor's news release for the purposes of National Instrument 43-101 is Tudor's President and CEO, Ken Konkin, P.Geo. He has read and approved the scientific and technical information that forms the basis for their disclosure contained in their news release.

The Qualified Person for this news release is James A. McCrea, P. Geo., for the purposes of National Instrument 43-101. While American Creek has not independently confirmed Tudor's information, Mr. McCrea has read and approved the scientific and technical information that forms the basis for the disclosure contained in this news release.

The Corporation has an interest in the Treaty Creek property, a joint venture project with Tudor Gold/Walter Storm located in BC's prolific "Golden Triangle".